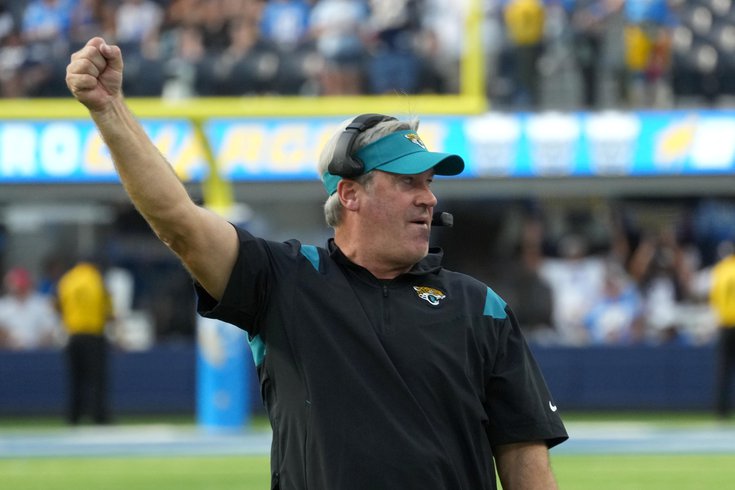 Before the start of the 2022 NFL season, most would have looked at the Philadelphia Eagles' home matchup against the Jacksonville Jaguars as a "put it in the win column" type of game. However, the Jags are 2-1, and look like a potential contender early on in the AFC South. They will not be a walkover opponent. Here are our five matchups to watch.

1) Eagles QB Jalen Hurts vs. the ghosts of Tampa Bay

In the wildcard round of the playoffs last season, Todd Bowles and the Tampa Bay Buccaneers had a great plan for how to slow down Jalen Hurts and the Eagles' offense. Why does that matter? Well, the Jaguars' defensive coordinator is former Eagles player Mike Caldwell, who coached the Bucs' linebackers from 2019 to 2021. Caldwell was part of the game planning for Hurts that day. It's a pretty good bet that he will go back and look hard at what worked.

Of course, through the first three games of the season in 2022, Hurts has looked nothing like he did in that blowout loss in Tampa, when the Bucs took away his running lanes, forced him to make throws while moving to his left, and just generally disrespected his and the Eagles' receivers' ability to win vertically. So far this season, Hurts has been spectacular, even when moving to his left, or ripping balls down the field and allowing his receivers make plays.

So far in 2022, the Jags' defense has mirrored the Bucs' defenses in recent years in many ways. The Buccaneers finished first in run defense both in 2019 and 2020, and third in 2021. So far this season, the Jags have been excellent against the run:

Hurts is going to have to beat the Jaguars through the air, and he'll have to do it against a defensive coordinator who helped devise a plan that worked against him in the past.

Earlier this season, the Eagles faced a great edge rushing duo of Danielle Hunter and Za'Darius Smith when they played the Vikings on Monday Night Football. Jordan Mailata and Lane Johnson handled them, as they do with most stud edge rushers. When other teams around the league look at matchups, the talk of the week might be how you're going to block those types of edge rushing threats, but that doesn’t really happen in Philly among fans and media with Lane Johnson and Jordan Mailata in place.

"Obviously we're very talented on the offensive line and those two guys do a great job," Nick Sirianni said in advance of that matchup against Hunter and Smith. "I just continue to see Jordan get better each week that I've been here. And then you guys know what I think of Lane. Lane is the best right tackle in this league. To me, I wouldn't take anybody else. I don't even think it's particularly close.

"So obviously you go in and you think, all right, who are their best players and how do we make sure that they don't beat us? You do that offensively, defensively, and special teams-wise. Of course, with us we're like, Lane is one of our best players, too. So, good. We'll be all right there. But that doesn't mean we still don't go through the process of -- we still have plays in to help out the edge when we need to.

"So, it's a little bit, yes, we're very comfortable with our personnel, but we also throw some help at them every now and then. So that's something that's always been on our mind as soon as I got into this league, and it's because of good coaches I've been around, is how are you going to stop the guys that can wreck the game. Defensive end is the first place you always look."

The Jaguars have a dangerous edge rushing tandem themselves in Josh Allen and No. 1 overall pick Travon Walker. Allen has had a great start to this season:

As for Walker, we'll let Baldy show you, aight?

.@Jaguars @44Ytw can do it all; with power, technique, and MAX violence…Exactly what you want in a #1 overall pick. #duval #BaldysBreakdowns pic.twitter.com/xV4c0ANae4

So, you know, it's another challenge for Mailata and Johnson this week.

The Eagles faced a team in the Lions Week 1 whose best receiver, Amon-Ra St. Brown, mainly operates out of the slot. While the Jaguars have a number of receivers capable of making plays in the passing game, their best receiver this season so far has been slot receiver Christian Kirk.

Kirk has been a major headache for opposing defenses, as the Jags move him around the formation, even lining him up in the backfield at times. Doug Pederson has found ways of getting Kirk matched up against linebackers, which as you'll see below just isn't fair.

The Eagles were interested in signing Kirk this offseason, but Kirk instead signed in Jacksonville on what was thought at the time to be an absurdly overpriced deal at four years, $72 million. That's not looking as crazy anymore, as Kirk has quickly become Trevor Lawrence's favorite target. Jonathan Gannon will have to have a plan for how to slow Kirk.

4) Where can the Eagles' D-line go feastin'?

Fortner is a rookie third-round pick who has filled in as a starter for the retired Brandon Linder. He's a player the Eagles' interior guys can take advantage of. And then every team seems to have a "JAG" ("just a guy") or two along their offensive line. The Jags' JAGs are Bartch and Taylor. It's an average line, at best, with shaky depth, but at least they're healthy.

Jamal Agnew is one of the most dangerous return men in the NFL. In five NFL seasons, he has six career return TDs, including one against Jake Elliott and the Eagles.

The Eagles' special teams units have been shaky this season, but it's mostly been in the return game, not the coverage units. They need Elliott to put the ball through the end zone on kickoffs, and Arryn Siposs absolutely can not hit any returnable low line drives.