Eagles will wear black helmets for these three games 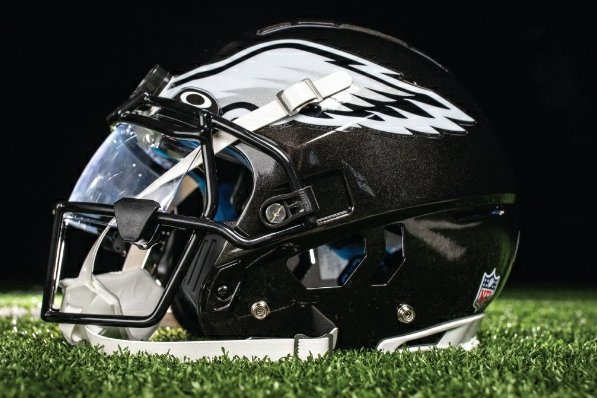 The Eagles' highly anticipated alternate black helmets will make their debut this season and we finally know exactly which games will feature them. Per an announcement from the NFL, the Eagles will wear them in Week 12, Week 16 and Week 18.

Week 16 is a notable game because it'll be on Christmas Eve against the Cowboys in Dallas. Does this mean the Eagles will wear their all-black uniforms on the road? I can't recall the Eagles ever wearing them on the road before. The Cowboys almost always wear all white at home. Maybe the Eagles will go with black helmets, green jerseys and white pants that day instead? The Eagles should wear green. It's Christmas! I thought it was odd they wore their all-black set on Christmas day in 2017, but, hey they won the Super Bowl that year, so maybe it's good luck. Does anyone care about this other than me?

The Eagles end their season in Week 18 at home against the Giants. This is kind of an odd choice for me. There's a chance the Eagles may already be locked into a playoff spot that week, leaving that game with very little juice. If Eagles fans want to see Gardner Minshew playing in a black helmet, that will be their chance!

The question I'm left with: Will the black helmet definitively mean they're wearing all-black uniforms? As I mentioned, I can't recall the Eagles ever wearing their black jerseys on the road nor I can remember them ever wearing them more than twice in a single season. It's making my brain spin!

As more news trickles in about this and all other things related to the Eagles' uniforms and logos, you know I'm going to be on top of it.