What they're saying about the Eagles following the first preseason game

From this week's joint practices with the Browns, thousands of sims of the NFC East, to how scary Jordan Davis can be 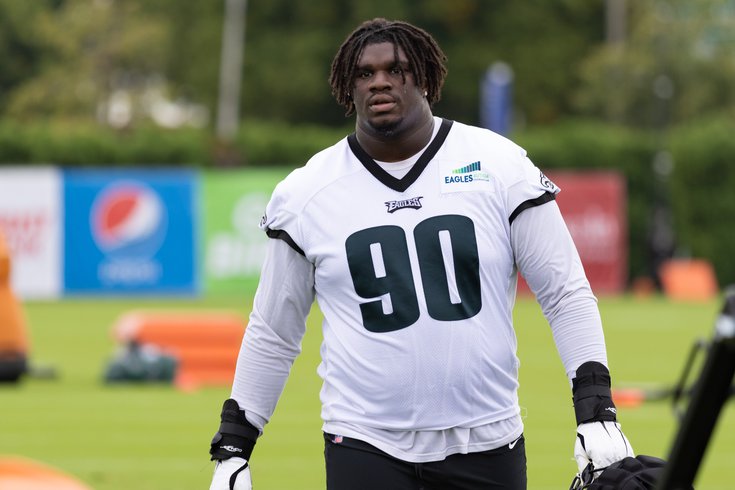 So how we feeling after the first preseason game?

The Eagles lost to the Jets Friday night, but as our own Shamus Clancy noted earlier, the final scores never actually matter at this time of year, especially when the starters play only a single series.

But man, what a series that ended up being. The offense marched right down the field, Jalen Hurts got hit late, Nick Sirianni and the linemen were livid over it, but Hurts jumped right back in and capped off the drive with a slick touchdown pass to Dallas Goedert.

Other takeaways from Friday night:

• The new Eagles linebacker's great camp continued with an interception early on.

• Cam Jurgens, who was drafted to eventually take over for Jason Kelce, sure does play like Jason Kelce.

Practices are also continuing on and the 53-man roster is beginning to take hold as the Eagles head into joint practices and preseason game No. 2 in Cleveland later this week, and so far:

• Hurts targeted DeVonta Smith heavily in the second-year receiver's return to the field on Sunday.

• Jimmy took a look at three trades that make sense for the Eagles.

• Then a trade actually did happen. JJ Arcega-Whiteside was sent to Seattle for DB Ugo Amadi. The tight end experiment didn't work out.

That's all from us, with more to come. What's everyone else saying about the Eagles?

The Eagles will have joint practices with the Browns in Ohio on Thursday and Friday ahead of their preseason game on Sunday afternoon.

Reuben Frank on why:

Sirianni believes spending time away together is valuable when it comes to his favorite core value – connecting.

The Eagles spent four days in Florham Park last summer for joint practices and a preseason game with the Jets, and Sirianni said the value of sequestering the team together for a few days was clear.

It’s the same reason Andy Reid still takes his teams away to a small college campus for training camp, just like he did his entire 14-year stay with the Eagles.

“As far as going away, I think that's good,” Sirianni said. “I felt last year that there was some good bonding and some good connecting going on in the hotel when we were against the Jets.” [NBCSP]

The Eagles were one of the big winners this offseason thanks to a run of high-profile trades and signings, but is that enough to take the NFC East away from the Cowboys?

Austin Mock used his NFL projection model for The Athletic to run a sim of the NFC East 100,000 times, and because Dallas has a more surefire bet at quarterback with Dak Prescott, they maintain the edge in his findings.

And what Mock had to say about the Eagles' chances:

Jalen Hurts rounds out one of the best rosters in football and the Eagles become contenders in the NFC with Super Bowl hopes. Hurts is a serviceable quarterback in the NFL, but there are questions about his ability to raise a team’s ceiling. He can prove everyone wrong this year by being more efficient through the air while continuing to confound defense with his legs. If Hurts can consistently play at an above-average clip, the Eagles have a ceiling as high as any team in the NFC. [The Athletic]

Jalen Hurts was a perfect 6-for-6 in his lone series Friday night. MVP campaign incoming? That's what Rich Eisen Show co-host Chris Brockman came to the table with in the program's Overreaction Monday segment. That and an NFC East title for the Birds.

Eisen doesn't buy Hurts for MVP, but "One of the things I'm about to talk myself into over the next three weeks is that the Eagles in the NFC East," he said.

Jordan Davis. Keep an eye out, and I'm already...and I know my Michigan man (the Lions' Aidan Hutchinson) and Jordan Davis' [Georgia teammate] that was drafted first overall (the Jaguar's Travon Walker) will be pegged as defensive player of the year candidates. Do not sleep on Jordan Davis, who is creating major problems and wreaking havoc. I like the Philadelphia Eagles." [Rich Eisen Show]

Throughout camp, there have been two common things often said about Davis. 1) He's BIG, and 2) He's MEAN.

So how promising was Hurts' perfect drive actually?

Yeah, it's preseason, but former quarterback JT O'Sullivan found a lot to like reviewing the film over on his YouTube channel The QB School.

O'Sullivan published a comprehensive breakdown of Hurts' performance – the good, the bad, and the ugly – in the playoff loss to Tampa last week, and between both, you can learn a lot about proper footwork, reads, and ball placement.

Check it out below: