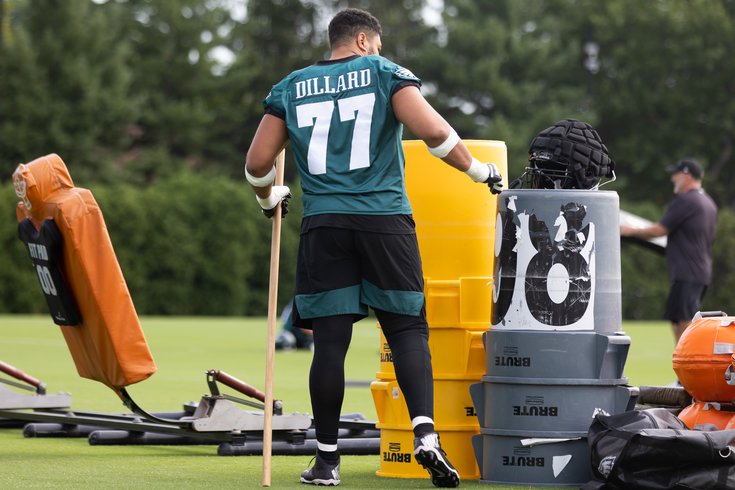 Prior to an Eagles training camp practice, Andre Dillard uses a trash can to rehearse what he's going to say to Derek Barnett if Barnett acts like a jerk again.

Day 11 of Philadelphia Eagles 2022 training camp is in the books, and it was a spirited practice highlighted by a couple of fights. We have a lot of notes today, so let's just get right to them.

• We may as well start with the fights, which both involved Andre Dillard. The first was during OL-DL 1-on-1s. Derek Barnett attempted a bull rush, and Dillard not only held his ground, but was also physical with Barnett on the rep. Barnett then took a swing at Dillard, and it was on. The fight went to the ground and was broken up quickly, with Brandon Graham cackling through it all.

In the ensuing 11-on-11 period, Dillard got into it a little bit with Patrick Johnson, but nothing physical immediately evolved. After that session, Dillard screamed some obscenities at seemingly nobody specific. He then tried to cool down a bit during positional drills.

When 11-on-11s started back up, Johnson attempted a physical bull rush on Dillard, with Dillard once again anchoring well, winning the rep. Johnson continued to battle after the whistle, causing Dillard to wind up and throw a left hook that connected with Johnson's head. And again, it was on. A pile formed, the fight broke up, and Dillard emerged helmetless.

Dillard was then escorted off the practice fields with a physician. It was unclear whether he got kicked out of practice or got hurt.

Back in June, I took a look at Dillard's 2021 season, and felt that he didn't often play with emotion.

• Play demeanor: There are moments where Dillard just stops playing on certain plays. My perception is that he seems to have an internal clock in his head on how long he thinks a play should go, and when that clock expires, he stands and watches instead of playing through the whistle. There's also very little emotion in Dillard's game. He rarely celebrates with teammates on the field after big plays or scores, and he has unlively body language at the conclusion of plays. I'm not necessarily knocking him for that — it's just an observation. But if given the choice between no emotion and some emotion, I'd like for my left tackle to play with some emotion and enthusiasm.

He certainly played with emotion today, which I think in his case is a positive. Beyond the emotional play today, I think that Dillard has had a legitimately good camp.

Brandon Brooks was a guest at Eagles practice today, and in a casual chat with reporters after practice, he liked seeing some fire from Dillard as well.

• Jalen Hurts had a down day, in my opinion. He had three ugly underthrows:

And then just generally speaking, during a session in which the offense was backed up against the shadow of the end zone, Hurts could not get anything going, and the defense dominated.

On the plus side, Hurts did throw a pretty ball in 11-on-11s down the left sideline to Watkins, who hauled it in for a score. Watkins subtly extended his right arm into Zech McPhearson, giving a slight shove before separating at the last second to make the play. Well done by Quez.

Hurts verdict: Stock down, but I think Eagles fans can feel OK about a down day after he went 6 for 6 for 80 yards and a TD in the first preseason game. 📉

• Above we mentioned DeVonta Smith, who made his return to the field after missing five practices as well as the first preseason game with a groin injury. He had the play of the day today, leaping high to snag a throw down the left sideline behind Maddox and McPhearson. Both DBs fell to the ground, and Smith then turned upfield. Impressive hops by Smith on the play.

Smith was also involved in a brief scary moment. During the "backed up" session, Hurts led Smith into traffic on a slant route, and T.J. Edwards accidentally popped him. Smith went down hard, but was able to get right back up. This is probably where we should also note that Edwards is always around the football.

• Josiah Scott recently started getting reps at safety. Today he got safety reps with the first team defense, and I can't recall seeing him at corner recently. He might just be a safety now. In my opinion, this transition should be viewed as positive news, as opposed to J.J. Arcega-Whiteside's last gasp move to tight end this offseason.

If Scott's move to safety is indeed an encouraging sign for Scott, that should be viewed as alarming news for backup safeties like K'Von Wallace and Jaquiski Tartt.

• You saw Kyzir White step in front of a Zach Wilson pass on Friday night for an interception. Today he punched the ball out of Kenny Gainwell's hands for a forced fumble and recovery.

• In other fumble news, Hurts and Jason Huntley had a bad exchange that led to a fumble. Huntley has speed, but I think his inability to run through contact showed up on Friday night.

• A few small points on the receivers and tight ends:

• Patrick Johnson will be remembered for the fight today, but he had a hell of a practice otherwise. He smoked Kayode Awosika around the corner for a sack, and he blew up a zone read, swallowing up Gardner Minshew for a loss of a few yards on a run play. Beyond those two plays, Johnson was buzzing around football all day, and creating disruption in the backfield. He is very clearly second on the depth chart behind Haason Reddick at the SAM linebacker spot, putting some distance between himself and rookie Kyron Johnson.

• The "backed up" session was one of the liveliest of camp so far, and as noted above, it was dominated by the defense. I think the highlight of that session was on a 3rd and 3 with the offense still inside their own 10. Pre-snap, Nick Sirianni yelled, "Nothing stupid, Derek!" in the direction of Barnett, lol.

One more other quick note on Barnett — After practice was over, he walked off the field with Patrick Johnson, and both players were chuckling. I don't know what they were talking about, but as noted, they were the two Dillard combatants today.

• The Eagles cut undrafted rookie SAM Ali Fayad and OL Bill Dunkle today. The team has to get down to 85 players by Tuesday. If I have to predict the next three cuts, I'll go with S Jared Mayden, TE J.J. Arcega-Whiteside, and WR Lance Lenoir.