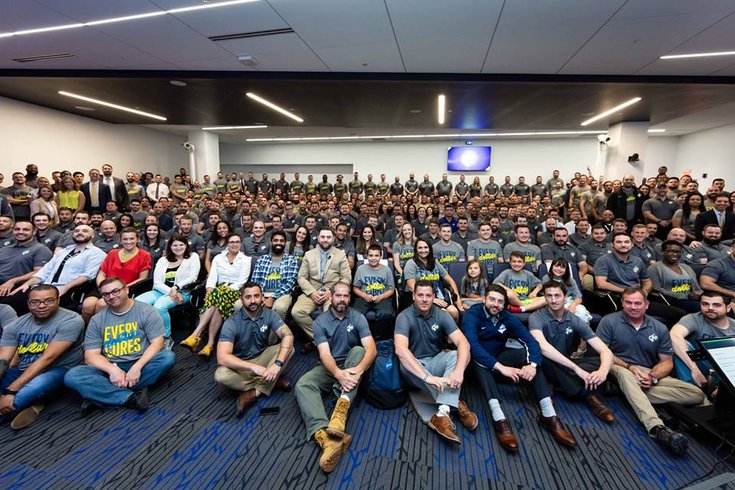 Power Home Remodeling in Chester, Delaware County ranked as one of the nation's best places to work in a recent Glassdoor survey.

Job search site Glassdoor has unveiled the results of its latest Employees' Choice Awards, which ranks the nation's best places to work, according to its employees.

In step with last year's results, Chester, Delaware County's Power Home Remodeling has once again earned top marks, with employees voting the home renovation firm to the No. 15 spot in the U.S. This is a small jump from last year, when it was ranked No. 16.

Parameters for the rankings require the companies have more than 1,000 employees. After analyzing 45 million anonymous company reviews, Glassdoor compiled the rankings with particular emphasis on the company's pros and cons, growth opportunities, compensation and benefits, culture and values, senior management, work-life balance, and if they would recommend the company to a friend. Glassdoor also weighs the company's six-month business outlook.

Employees at Power Home Remodeling praised the company for its growth opportunities, noting the company gives back both to employees and the local community.

Also appearing on this year's list is software company SAP, which is based in Germany but has its U.S. headquarters in Newtown Square, Delaware County. SAP fell from No. 11 to No. 27 this year, still lauded for its company culture and diversity.

In New Jersey, the only ranking company is New Brunswick's Johnson & Johnson, which ranked No. 49 thanks to its company culture and its fostering of a good work-life balance.

Tech companies in Silicon Valley and the Bay Area dominated much of the Glassdoor list, including Google, Facebook, and Linkedin, all of which each ranked in the Top 10. Power Home Remodeling managed to outrank some other big names, however, including Trader Joe's (No. 23), Microsoft (No. 34), and SpaceX (No. 48).

The No. 1 spot went to Bain & Company, a global management consulting firm based in Boston.