It appears evident that the Simmons camp would take any small crowd of fans booing and blow that up to an extreme. 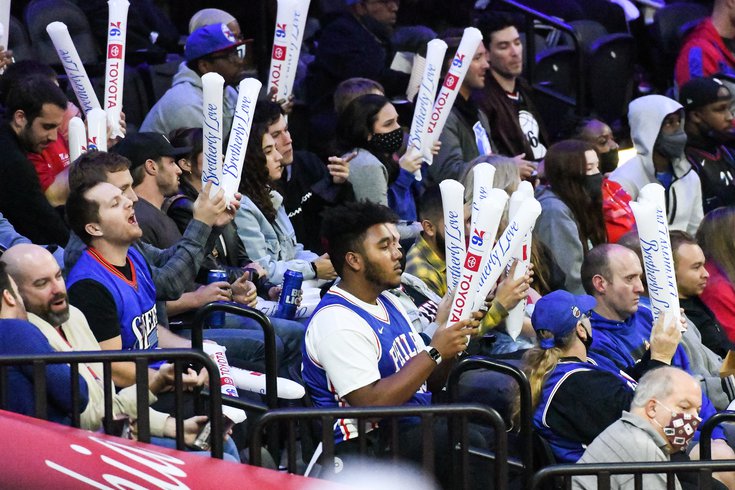 PHILADELPHIA, PA - OCTOBER 28: Fans cheer during the Philadelphia 76ers game against the Detroit Pistons on October 28, 2021 at Wells Fargo Center in Philadelphia. (Photo by Kate Frese/PhillyVoice)

The latest blockbuster from Kyle Neubeck further illustrates how broken his approach was in forcing an exit from Philadelphia.

Simmons and his camp are reportedly baiting the Sixers fans into booing and possibly worse, to solidify a grievance against the Sixers as an organization. This is small, petty, and dangerous if true. Beyond the obvious nonsense of baiting any fan base to putting anyone on a pro-level in harm’s way – this is irresponsible at best to anyone actually dealing with mental health.

It de-values people’s actual claims of issues with mental health – which still carries a negative association with a lot of people unfamiliar with its severity.

It was just meant to further irritate you into becoming outraged that he would dare show his face here again. The latest report implies it was a ploy all along to get back money lost – because of Simmons' inability to be a decent teammate. That’s the other main issue here that can’t be lost – this wasn’t brought on by any outside force(s), rather Simmons himself.

This was a plan before it got leaked and Kyle reported on it. This was meant to bring you in as the final collaborators – Sixers fans to put the final nail in Simmons’ case by doing exactly what he thought you would do. It’s just hard to take anything this guy says or does at face value, and as more comes out it appears his decisions are made on a whim. He signed off on this so it’s hard to feel sorry for someone who routinely follows bad advice.

This should weigh heavily against Simmons, if not to invalidate his mental health claims, then to mark his evidence as tampered.

Simmons is planting evidence – himself – inside the Wells Fargo Center with hopes we will confess to a crime we didn’t commit. Sixers fans have every right to boo that crumb whenever he comes back, and at no point should that be used against any fan base.

We love our team and the guys who are playing for it. The arrival of James Harden has solidified the Sixers as championship contenders. Joel Embiid winning the MVP would be a victory for the Process — to those who hated it but still stood by him. Tyrese Maxey is turning into one of the more gifted young point guards in the NBA. Basketball is back in Philadelphia and that cloud of negativity is gone to Brooklyn.

But he’s back – on purpose. They knew he wasn’t going to play in this game for a while, who knows — maybe a part of the deal to trade him in the first place.

“So what about us, Shander? What are we supposed to do??”

I’m not entirely sure. What I would want you to do is kill him with kindness and blow up his spot. I’d prefer if everyone went out and showed up in Simmons jerseys and gave the kid a standing ovation. But I also understand the vitriol that flows through the veins of most Sixers fans – a lot who supported this man while he was here for so long.

I don’t pretend to be delusional, nor will I insult you with some roundabout way to credit Simmons, like some stupid version of that with Carson Wentz. Simmons deserves to hear it, he deserves to be ridiculed and exposed as a fraud, but that also helps his case.

Again. If Ben Simmons truly suffered from issues with his mental health, then this is the worst possible decision he can make. The added element from Neubeck’s report of Simmons and his camp planning this, further illustrates how low-level of a plot this was. Exposed two days before it even happened. Be it the Nets, Klutch Sports, Simmons’ family, or some confidant, someone is putting this kid in a terrible position.

Again, that’s if you believe him.

Kill him with kindness, boo, get mad or throw his jersey on the floor. All predictable responses to one of the more bizarre situations going on in the NBA. Maybe there is a way to convey to Simmons how little we care and want him in our history, but it most likely will be reduced to a bunch of fans booing.

It also appears evident that the Simmons camp would take any small crowd of fans booing and blow that up to an extreme.

This whole thing has been about extremes, from him on the floor to his exit, to this warped sense of entitlement that someone owes you something in return for your actions.

There are plenty of people who are working hard every day to stay above water in the NBA. There are also even more people on the planet who are dealing with a misguided stigma surrounding issues with mental health. Ben Simmons failed them both.

Do what you wish, it’s not going to change the thickness in these decisions and maybe it truly is the final nail in this chapter.