Eytan Shander: Are we headed for full stadiums this fall — and is that a good thing? 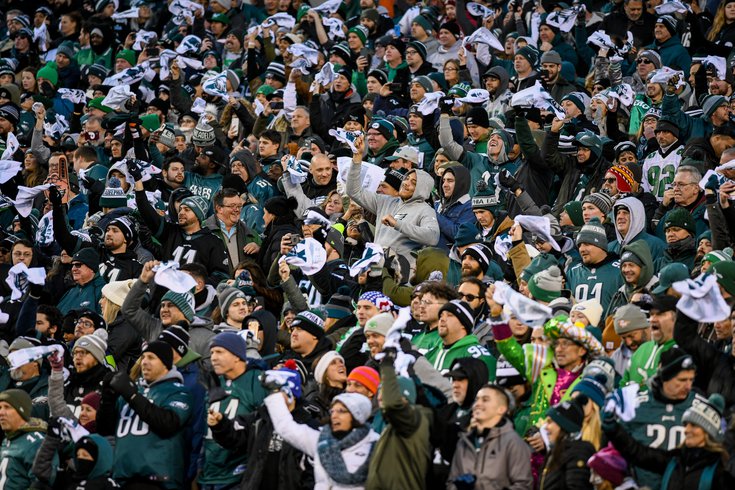 Eagles fans put themselves at risk for another Eagles chat with Jimmy Kempski.

I can’t believe I’m actually thinking this out loud, but I’d be shocked at this point if NFL stadiums aren’t full of fans. It’s getting to the point where the NBA and NHL could have fans by the end of July. I’d bet you NFL preseason games will have fans in some capacity.

I’m definitely not advocating for this by any means, yet here we are, fresh off a Memorial Day Weekend full of activity. The country did not ease back into any sense of normalcy, we dove headfirst into the deep end.

Seriously. After watching videos from Philly, Atlantic City, OCMD, Houston and beyond of people flooding areas with little to no protection – even Pretty Boy Floyd was getting down and dirty without a mask – I’m left asking professional sports leagues, “What’s taking you so long?”.

Thousands of people flocking beaches up and down the East Coast left a lot of us wondering the remaining severity of the virus. But we are still told by the CDC to the nation’s top TV doc that this thing ain’t over. Herein lies the biggest issue sports will face in keeping people out of stadiums. The optics of keeping people outside of a large arena while those same people have frequented plenty of other large gatherings, well, that won’t go over well.

Let’s be honest, we aren’t there yet and nobody from Troy Vincent to Stephen Ross would try and convince you otherwise. The NFL hasn’t had to make any drastic changes nor rush to start a season simply due to dumb luck in the calendar year. The league – according to Yahoo! Sports – is planning on having coaches back this week and minicamp starting mid-June! Do you realize we have a better shot of watching Carson Wentz clips leak from camp before Bryce Harper swings at a single pitch? (Side note: MLB needs to get this thing going fast, like now.)

I don’t know how we reverse what happened this past weekend, especially since we are heading into full-blown summer. The only thing that would cause a major setback would be an increase in COVID-19 case numbers, but even that comes with questions. How serious are the new cases? Where are they centralized, if at all? How many were already sick or at significant risk? It goes on…

Again, I’m not an advocate of ‘herd immunity’ but it’s worked in some parts of the world. Memorial Day Weekend may have been a first step in mixing asymptomatic people with others who when/if they get it will also be asymptomatic.

I know so many people found comfort on social media by tweeting videos of people partying to exploit or point the finger at different groups of people. The videos were used as weapons to attack cultures. But the point they all missed — and ironically helped build — was the opposite. Everyone, every group, all of us in some capacity went out and didn’t give a damn.

While our freedoms seem to be limited by the day, one thing that should remain is your choice on whether to go to a game. You have every right to hold off until there’s a vaccine. Say no to any game until it’s safe according to your own standards. I admire and mostly agree with your stance, but fear we are in the growing minority. Barring Dr. Fauci getting on TV with drastic numbers, pleading for Americans to return to quarantine, expect fans in full capacity at NFL games.

Hey, it’s already happening and this is May. Give it time, come September it will be like nothing ever happened. Crazy, isn’t it?

The immortal words of Vince Young will ring true this season as the Philadelphia Eagles coach will win Coach of the Year. Looking at early odds...

The Eagles have already been predicted to be notably better this year than the team that won the divison last season. Both inside and outside Philadelphia, the experts seem to agree Doug P’s offense got a major boost. Let’s not forget the coaching staff around him. It seems like free agency was kind enough to the Birds to continue supporting Jim Schwartz. Add the tougher schedule and the heightened expectations, if you can pay that off by winning the division and 11 to 12 games in the process, you are a lock. The longer you wait, the less value you will get on Pederson, so taking him this early makes the most sense.

The Bucs are going to be the biggest disappointment in sports since that Formula E racer hired a professional gamer to race for him in an e-racing charity event.

How can you win the award if you can’t even win your division, Mike?

The Colts were really good with Andrew Luck. Inconsistent at best with Jacoby Brissett. They aren’t fooling anyone with Old Man Rivers.

Coaching bias. Won the Super Bowl last year so would have to go undefeated this year to win the award.

Stefanski is going to have to rely on Kirk Cousins. Fin.

Hey, the team will be vastly improved, but nobody wins Coach of the Year by going 8-8 and missing the playoffs.

Yeah, the Bills are going to win the division, but it’s EXPECTED. Plus, they were playoff-good last year.

The division is too tough to run away with, and it’s no surprise to see them back in the playoffs.

Not often a guy will try and pin his hopes of winning CoY on a RB, but here we are. No knock on Henry, but I like my chances on Wentz.

This is one of those sucker bets. Flores is a good coach and looks to have a handle on things, but no way Miami is talented enough to take over that division. Looks good on paper though, so easy to bet.

That’s Super Bowl Champion and 2020 NFL Coach of the Year Doug Pederson to you.