And it's time for the Eagles brass to pull the plug... 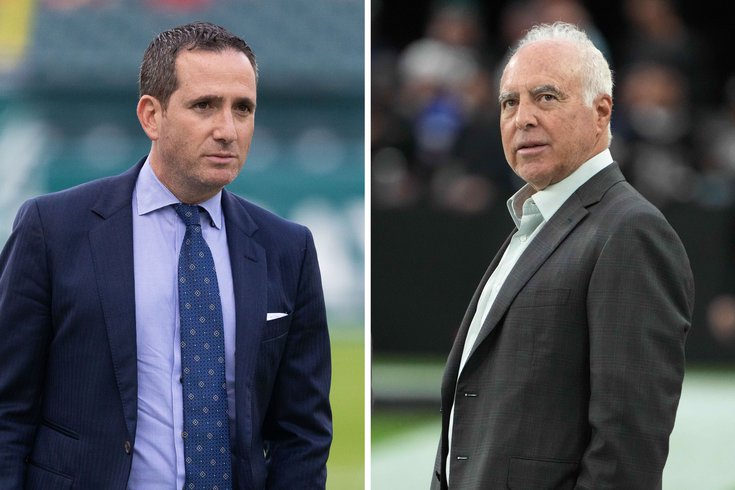 How much longer will we be subjected to this experiment?

It’s not working. The Eagles defense is clearly broken. Everything we were told about being patient and allowing it to grow, it’s nonsense. We don’t need a full season’s worth of games to determine something this glaringly obvious isn’t working. It’s hurting the team – both on and off the field.

I’m sick and tired of hearing the excuses from the people who began this experiment in the first place. The people who brought this nonsense to our city. We’re told it just needs time, and to be patient, and that any interior disagreements – or worse – have been smoothed over.

Then I watch what I saw on Sunday. I go back to what they’ve told me about the defense, how all of the above is a work in progress. I haven’t been this insulted since I was told Mack Hollins runs great routes.

After this past Sunday, there’s no good reason to continue with Jonathan Gannon as the defensive coordinator. The situation is worse than rock bottom, it’s underground.

Let me stop you right now with the “Well, Sirianni and Hurts are getting a full year, why doesn’t Gannon?” nonsense. Wait. Does anyone actually believe that? For the small percent who may, it’s not about time. This is about what we are watching – including what we’ve seen with the offense. I’m no huge fan of the head coach and I am rooting for the QB – even though I’m not sure either will be here next year. But what’s undeniable is the team established an identity over the past two games on offense – something we’ve yet to see on defense. The box scores on offense looked the same from Detroit to LA, with drastically different outcomes. The team showed consistency and commitment to a run-game.

My partner on The Middle, Harry Mayes, disagreed with me earlier in the week on how they came to that commitment. It got me thinking that it should matter that Sirianni and the offense tried to come out throwing, and how that shows a continued trend toward too much passing. But I stand by my praise of their ability to adjust – especially because we crushed this Eagles team for moving away from what worked against the Raiders. They made the wrong adjustment then, and the right one this past Sunday.

It doesn’t mean Sirianni gets a 10-year extension or Hurts is named starter-for-life, but we saw two consecutive weeks of progress. We haven’t seen a damn thing from this defense except high numbers for opposing QBs and interior frustration. It’s hurting the team every week, highlighted once again this past Sunday.

For the fifth game this season a QB completed at least 80 percent of his passes. That's almost hard to comprehend and clearly you can't win that way in the NFL. It’s almost as bad as saying a team can win by giving up more points than the other team. Stupid, right? This is a disaster. The Eagles are allowing opposing QBs to complete 75.5 percent of their passes on the season. That's better than Drew Brees' single season record for completion percentage (74.4)!

We also saw the ramifications of a defense allowing a QB to complete so many passes – all the while keeping their offense on the field. It physically drained the Eagles defense, who looked noticeably gassed. This is going to be a huge issue moving forward, where the defense just doesn’t have enough bodies nor energy to compete in the fourth quarter. Justin Herbert had all day – the Eagles couldn't get home even when they did blitz – and was basically begged by Gannon to keep the football.

How is this even a reality? Without a doubt this is the worst the defense has ever looked in my lifetime. I’m sure you can find a unit that gave up more yards in an area, or more points, or had worse players on the field. But this is a collective failure, and to make matters worse, it’s compounded by the fact there are good players on this defense. They continue to be failed by a system that should never have existed in the first place.

Howie Roseman and Jeff Lurie are on the hook – once again – for bringing shame to this team, this fanbase, and ultimately the league itself. These positions are highly coveted and should be fully vetted. How can anyone watch the glaring issues this defense has – that they refuse to fix each week – and think this was the most qualified person for the job?

This can’t continue. If they truly are moving on from key players after this season, then they cannot allow Gannon to oversee any rebuild. There’s no “He’s gotta get his guys” when there’s no system to build.

To quote my other partner from The Middle, “We all see it… we all see it.” If I see it, if Barrett Brooks sees it, how bad do you think it looks for players on that team?

Russell Wilson is coming back to the Seahawks and Aaron Rodgers is returning to the Packers — at least that’s what this line is telling me. It will be interesting to see how much late public money comes in on GB once Rodgers is officially cleared, but we do know about Wilson. Just having him back doesn’t guarantee the Seahawks step in and win this game, they weren’t playing exceptionally well when Wilson was healthy. The Packers are riding a ridiculous 8-0 ATS streak, most recently covering against the lowly Chiefs. Seattle is awful covering spreads on the road, just three out of their last 10. Take the Packers while you can.