Eytan Shander: 'We need to focus on how we speak' 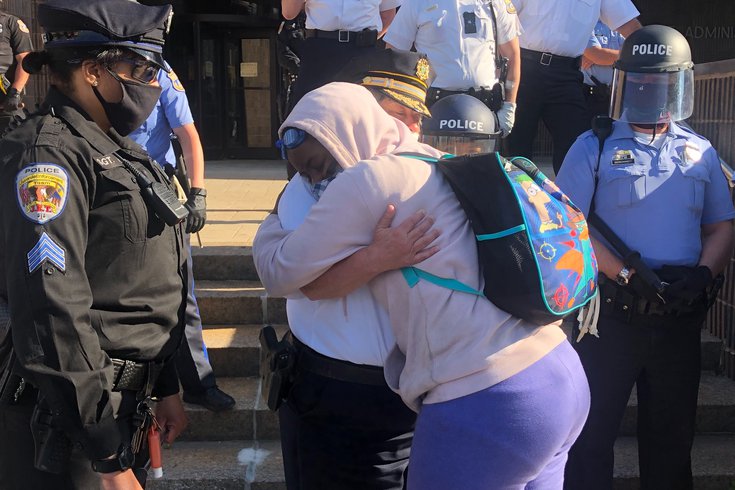 A police officer in Philadelphia embraces a member of the community.

Ludwig Wittgensein coined the “Language Game” as means to show how vital context and region are to words and their meaning. He said to speak a language is “part of an activity, or form of life.” It’s woven into how we think, and then act. So yes, it’s important to distinguish between a protest and a riot. It’s necessary to understand the social construct of the term “race” despite this all happening as a result of “color.” This doesn’t fix the problem, but is a vital first step in activating our minds to change.

I’ve put together some clips of my shows over the past couple of days. I even grabbed a clip from 3 years ago following the murder of Philando Castille. We see progress, see a movement take a step forward, then – for a multitude of reasons – we see it pushed two steps back. Sometimes it’s after a year, other times it’s after a week. We didn’t forget Eric Garner and so many before him, we won’t forget George Floyd.

Two awfully disturbing pieces of information came out regarding the overwhelming bot problem with Twitter. For everyone who thinks they are safe from fake news after deleting their Facebook account, wake up.

Let’s start with COVID-19, and the ridiculous findings from a Carnegie Mellon University study showing how much influence was fake. They analyzed more than 200 million tweets over the past five months and found bots. Everywhere. Just like Elaine – fake, fake, fake – in the diner. Of the top 50 influential retweeters, 82% were bots and 62% of the top 1,000 retweeters were bots.

The Chicago Sun-Times exploited the social media site for doing something similar to what happened with COVID.

The information is already compromised before it gets to you. They hook you on being able to voice your opinion but limit and control everything after you hit "tweet". pic.twitter.com/I8w6nKhDLG

Not good. It doesn’t matter how much money Jack donates nor what hashtag they put up on their bio. It’s just as controlled and monitored as any other social media site, or any other public online forum.

It’s the ultimate waste of time and energy. Going back and forth with a bot, something that will never see nor hear your side of anything, it was programmed that way. Good luck out there. Be smart. And stay safe.