ESPN's 'The Last Dance' is dancing around the good stuff... 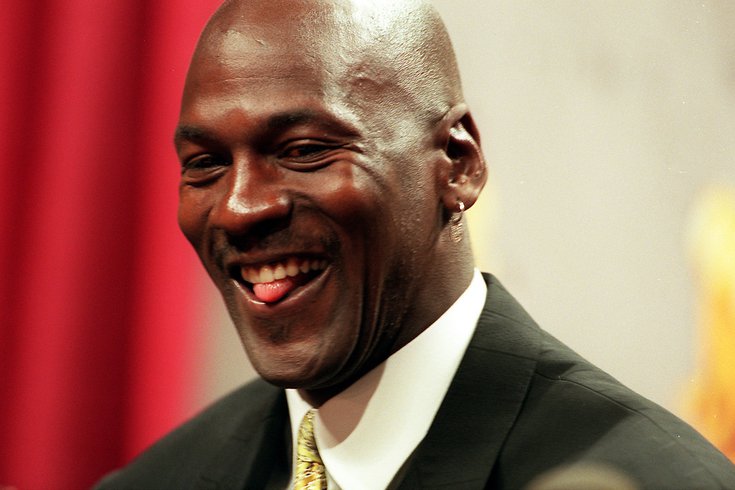 Michael Jordan looks on during a press conference in Chicago.

When I was fifteen years old, I switched high schools and repeated 10th grade. One thing I’ll never forget about that summer was attending the UNC Basketball Camp, staying on campus in the historic Chapel Hill dorms. We played basketball in the mornings – bussed to different gyms around the area – and listened to former UNC players talk to us in the afternoons. We sat in the Smith Center, watching people like Phil Ford, Hubert Davis, and even Dean Smith himself speak to us. We learned what it takes to be a better basketball player and person.

We even got to physically meet two incoming freshmen that year, you may remember them as Rasheed Wallace and Jerry Stackhouse – yes, I’m that old.

The highlight of the camp came one day starting with a bunch of whispers.

Imagine being 15 years old in 1993 and hearing Michael Jordan was in the building, the same damn building as you. It was the same day as Ford’s speech to us, and there was a huge “Tarheel” blue curtain marking off a side hoop. You could only hear the ball bouncing and hitting the rim. MJ yelled something, and next thing you know the curtain came down, and we saw 15 minutes of Jordan shooting around. He never spoke to us, but that moment of knowing how many young kids would kill to just see him shoot, that moment was enough.

So, like you, I grew up having — and still have — a strong love for Jordan as the best basketball player ever. Nothing I write next will change that, not for me.

Kyle Neubeck wrote a fantastic piece on where the Last Dance comes up short, specifically in the area of gambling. Not to go full Ken Burns on it, but you can see how Jordan himself being involved in the making of the documentary could present a roadblock in raising, and then answering, some pretty important questions. Michael Jordan bet on everything. Like, everything. That’s really the underlying theme throughout the series so far. It drove him to bet more if he lost, and he would bet on anything from those he could control – like his own golf game – to things maybe a little out of his control – like results of things he wasn’t in.

So how could we believe that he bet on everything, including his own game of golf, and never ever place a bet on himself or the Bulls to win. How is it that Jordan never bet on basketball games HE played in?

Maybe more importantly, where in the world am I led to believe he wouldn’t bet on his squad? Someone who is that competitive combined with a deep need to gamble isn’t stopping right at the edge of the cliff. The difference between Jordan and Pete Rose would be the impact a manager could have on a game, as well as the fact that there’s nothing that would ever indicate Jordan would take a dive — the same thing the leads to his gambling, that competitive drive, would prevent him from ever intentionally losing. He seems compulsive enough to simply bet himself out of a bad loss, as opposed to throwing a playoff game. They can’t keep giving us smaller anecdotes about betting with security guards, arena workers, and “Slim” and then expect us to not ask any questions.

You would have to think people are simply scared to admit what’s becoming more and more obvious —that Jordan bet on basketball — because they fear a tarnished image.

Again, even it it came out tomorrow that MJ bet on his team to win – and they did – it wouldn’t take away from his abilities, nor would it drop him below LeBron James in some ridiculous sports talk radio debate. Look at everything in front of you, all the circumstantial evidence. You don’t need me to reach a conclusion.

One of the most vulnerable moments you will see of Jordan came in the form of a conversation with Jerry Seinfeld.

MJ looks so comfortable with Jerry. That face as Phil kicks Seinfeld out feels like two buddies getting in trouble in class. pic.twitter.com/X9imfIiKIP

It was amazing, because in that short clip you see the two chatting, then Phil Jackson throws Seinfeld out of the locker room. There are two genuine moments where MJ clearly doesn’t care how he looks in front of the camera. The first is a POV shot of Phil while he’s throwing Jerry out, you can see Jordan give a face like “Oops, my buddy just got caught by the teacher.”

The second moment was right after it, where Seinfeld made a quick joke and Jordan laughed. Like, he really just laughed. It wasn’t anything on a commercial, not a laugh on Space Jam where he needed twenty takes, just a genuine laugh that looked like he was comfortable. And that's something we found out Jordan strived for but rarely got, comfort. More of the genuine, vulnerable moments please!

Hey, so I have a new show. Thanks to Jakib Media and SB Nation Radio (Gow Media) for allowing me to take my show to the next level… The Second Level to be exact. My new midday show airs 11 a.m.-1 p.m. from Monday-Friday on SB Nation Radio. The best way to listen is download the app or go to sbnationradio.com. Please follow/subscribe to my twitch channel so you can watch everything for free! And be sure to check out Eytanshander.com.

I’m truly conflicted at this point on moving forward with Westworld after the third season. It should come as little surprise – if you’ve been reading my "emotional" recaps – that I’ve been more down than up throughout the eight episodes. The show changed and took on a completely different feel. It should have simply rebooted with a new story, instead of forcing storylines to connect in such a short period of time. Think of how different some of the more fundamental concepts felt this season, compared to how Westworld initially introduced them.

There may not be a better metaphor in regard to character depth changing than simply looking at this season’s plot. Gone were the competing timelines, something that carried into season two after the first season mastered it. That depth in the writing was lost in the characters. Just start at the top. Both Dolores and Maeve were reduced to single-minded tasks with very little divergence from their plan. There were no challenges for Dolores outside of another gun battle with her on “God Mode” and Caleb there for moral support. Think of the stark contrast between that and the Wyatt/Dolores dynamic in the first two seasons.

Then there's Maeve, poor Maeve. She went from the most complex of hosts – not to mention played by the best actor on the show – to being exploited by everyone promising to reunite Maeve with her daughter. She spent the entire season in a loop, just not hosting at a brothel. Think of the stark contrast between deep decisions and connections established last season with Maeve traveling through the parks. That was lost as she was a hired henchwoman with her daughter as the dangling carrot.

Lastly, what the heck happened with Bernard and MIB this year? Backseat would be putting it lightly. They buried two of the strongest and – again – most built up characters in the show. For what? To watch Marshawn Lynch bust through a police barrier? To see new characters who were barely on enough to care about eventually die? They replaced Bernard – the most intriguing personality – with a bunch of filler and flashbacks. It's a total indictment on the writers, as they were given a two-season gift at the goal line but were intercepted trying to throw the quick slant — something Lynch knows something about. Nobody puts Bernard in the corner.

MIB was made out to be a huge element to the story, but nothing happened. He played Ford’s game, had some crazy scene hanging over after Season 2, was barely visible outside of making some wild proclamations and beating the crap out of his other personalities. Not much of his presence this year made sense, outside of him being a key part in getting Dolores to Solomon, there was nothing MIB provided. How could you waste Ed Harris like this? Killing the MIB at the end - after answering very little about all of the things they built up about him – was so odd. We still have zero closure on the final post-credits scene in Season 2.

Aaron Paul was solid. I expect a bigger role from him next year – if I’m back – as maybe he can break out of the beta/Jesse role. Would be great to see Paul step out of that comfortable #2 role and be dominant, without needing the person in charge to die or set off an EMP.

- Get $20 off your next live event at seatgeek.com – use code SHANDERSHOW.

- If you live, work, or play in NJ. PointsBet has a crazy offer that’s only available through my code SHANDER. And you will get up to $1000 spread out over 4 bets ALL risk-free! Sign up any way or with this link with the code already in.