But the Eagles will always be more important... 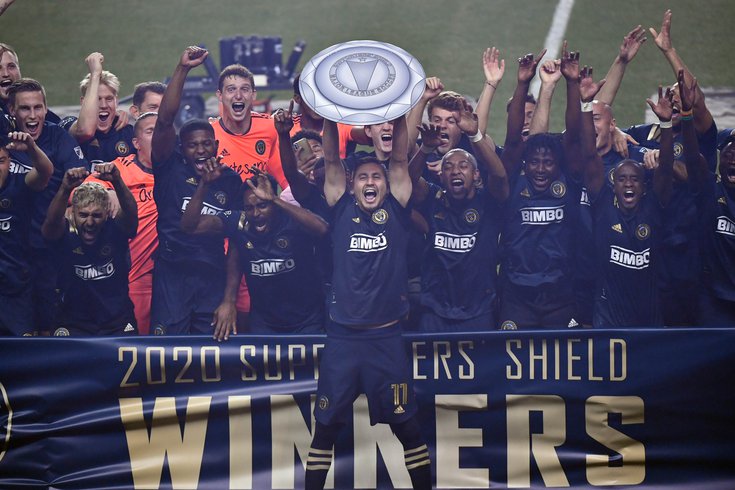 The Union won their first ever hardware of any kind this weekend.

This truly is a football town. No, not a Futbol town, but a fully immersed NFL city. It’s our identity. No matter how much pub Ben Simmons and his large friend Joel Embiid gets, we always come back to one thing. The Flyers go on a playoff run and it captures the city... for a week or two.

We just had the best season in 11 years for the Philadelphia Union, and local sports experts laughed that we even have a soccer team.

Ok, you win. If that’s all you want shoved down your gullet then I’m happy to oblige. But at least understand what we are missing. It’s the true joy of being able to celebrate stuff without having to know every single detail. We shouldn’t ask fans to become basketball, hockey, or soccer fans overnight as a team goes on a ridiculous run. They can – however – be welcomed in the group celebration without fear of being called ignorant, or other fans asking where they’ve been for the past __ years.

The Philadelphia Union deserve a ton of love for what they did, and I won’t pretend to hammer out extreme details. Most of you wouldn’t even get them if I did. The easy way is to say thank you.

Thank you to so many loyal fans of the game and the club. Thank you for sticking out a ton of bad seasons to finally watch your team finish as the best in the MLS.

Thank you, Jim Curtain and his players. Thank you for creating a culture of belief and hope, for allowing players to shine at their best. The guys bought into it and the culture grew from hope to winning.

Thank you, Chris Albright and your front office team, for having the guts to go with your vision. This team was not built with high-priced acquisitions, instead through savvy moves and buying into a team element. A former player using insight from his time on the pitch to build a winner.

Now, go out and win.

We care about all teams, but we don’t care equally about them. It’s just a fact. Sure, if someone were to come in and try to take away the Union or Phillies from us, we would fight like hell to keep them. But nobody can honestly say any other team outside the Eagles gets nearly as much attention.

That’s why no matter what happens with the Flyers, or if J.T. Realmuto leaves for the Mets, or if the Sixers lose again in the second round, or even if the MLS team finishes with the best record in the league… it doesn’t matter. None of it does.

The only thing that matters in this city right now is whether Carson Wentz can turn this around and win a historically bad division. This makes me sad. We are passing over great paintings in a museum to look at Garfield cartoons.

This isn’t an assault but rather a plea. I understand nobody has the time to be “4 for 4”, it’s been proven with radio ratings for decades. The Flyers don’t rate, and most people can’t really talk about them. The Phillies are boring, and so are the people who only care about that team. The Sixers provide pop but they’ve become reduced to “Did the process work (insert phone number)”.

It’s not too late to do a couple of things in changing who we are as fans, without having to alter our DNA.

1) Start by acknowledging we have teams and athletes in this city that you don’t pay attention to and recognize that as being ok. If you are someone who brags about paying attention to everything (although we know you don’t have the time) understand you are the anomaly.

2) Be happy for people that are winning things in your city, and don’t let your own ignorance be the cause for dismissal. “Well, the Union ONLY won the regular season trophy, so wake me up when they win it all.”

3) Enjoy the rest of your day

Eagles bet of the week

The number one bet of the weekend for this game is the D/ST to score a TD.

You can take them now or simply wait as you get closer to kickoff, but the odds should not change. This is more about Daniel Jones than any opportunistic defense the Eagles have, which they don’t. Jones is so bad, a poor man’s version of Wentz – who is really a poor man’s version of himself – that he will turn it over. It’s a given. The Eagles should have multiple opportunities to pick off Jones, but the real damage comes with pressure.

Keep an eye out for that strip sack and return, especially with their offense being pinned down near their own endzone. You will get a huge return on the bet!