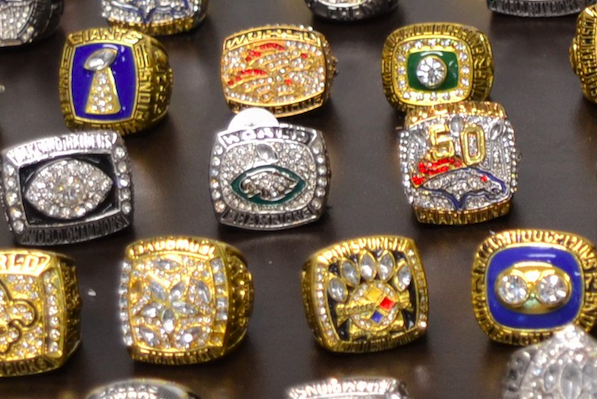 Most Philadelphia Eagles fans were probably never going to cough up $11,127 for a limited edition Super Bowl ring — even though, credit to the diehards, they're sold out.

Seriously, why not just wait for the knock-offs to arrive from Hong Kong?

Philadelphia Customs & Border Protection agents were waiting, too, and announced Tuesday that a large shipment of fake Super Bowl rings had been intercepted last Friday after arriving from Hong Kong earlier in the month.

The shipment contained a total of 108 rings representing Super Bowl winners throughout the history of the NFL. If they had been authentic, they would have had a combined MSRP of $1.08 million.

CBP officers "noted the poor craftsmanship" of the rings and contacted the NFL to verify their authenticity, since the league holds the trademark to the rings.

Officials said it's likely the rings would have ended up on internet shops at cheap prices.

"Customs and Border Protection officers are like offensive linemen in that both are on the frontline and work hard to protect something important," said Casey Durst, CBP Director of Field Operations in Baltimore. "CBP officers intercept counterfeit products at our nation’s Ports of Entry before they could harm U.S. consumers or businesses. We will remain vigilant and we will continue to advance our detection capabilities in order to secure our homeland and keep our communities safe and our economy prosperous."

The making of the actual Eagles Super Bowl rings was documented for posterity in a video filmed at the facilities of memorabilia manufacturer Jostens.

There are cheaper versions of the Super Bowl ring available for sale and one lucky fan will also win the team's World Championship Ring Sweepstakes.