The families have filed lawsuits against Cosmo DiNardo 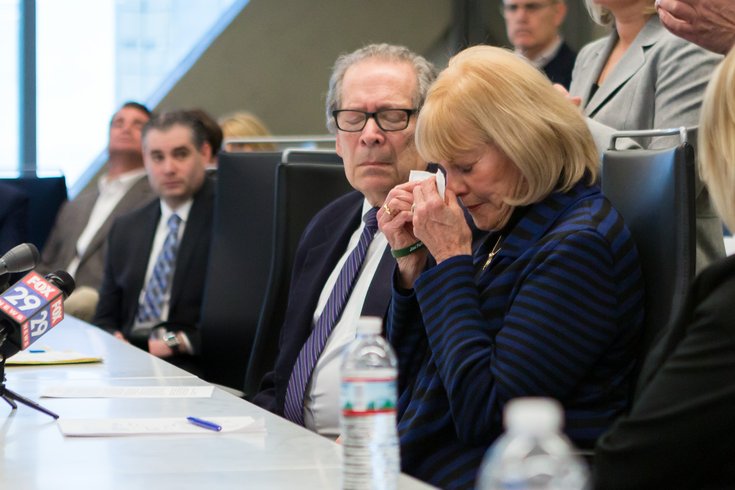 Sharon Patrick and Richard Patrick Jr., the grandparents of the late Jimi Patrick, share their grief after announcing a wrongful death lawsuit against their grandson's alleged killer, Cosmo DiNardo, on Monday, March 5, 2018.

Patrick, 19, of Newtown Township, was getting ready to meet some friends at a local Chick-fil-A. He had been at a party the prior night and appeared tired.

"He was just standing right in front of me," Sharon Patrick recalled. "I said, 'Are you waiting for me to get up to kiss you goodbye?' I stood up and I kissed him goodbye. I told him that I loved him and he told me that he loved me. Then we hugged each other."

But no one felt the pain like the families of the victims.

Three of those families addressed reporters Monday at a Philadelphia law office, displaying their grief as they shared vignettes of their loved ones. Earlier in the morning, each family filed a wrongful death lawsuit against DiNardo, his parents and his cousin Sean Kratz, who allegedly participated in three of the slayings.

"We miss Jimi every day," Sharon Patrick said, sitting beside her husband, Richard. "There isn't a day that goes by where I don't cry or think of Jimi. He was so important in our lives. We just valued him so much."

Jimi had finished his freshman year at Loyola University in Maryland, where he had earned a four-year scholarship. A perpetual scholarship is being established in his name, Sharon Patrick said.

She remains in contact with about 20 of her grandson's friends. They visited at Christmas and over spring break to talk and cry about Jimi.

She recalled a journal entry from his time at Holy Ghost Prep in Bensalem. Jimi wrote that his life goal was to make a difference in people's lives.

"I was so proud that he wrote that in that journal," Patrick said. "It's important to make a difference in people's lives and he wanted to do that. I think that gives you a really good evaluation of our Jimi." 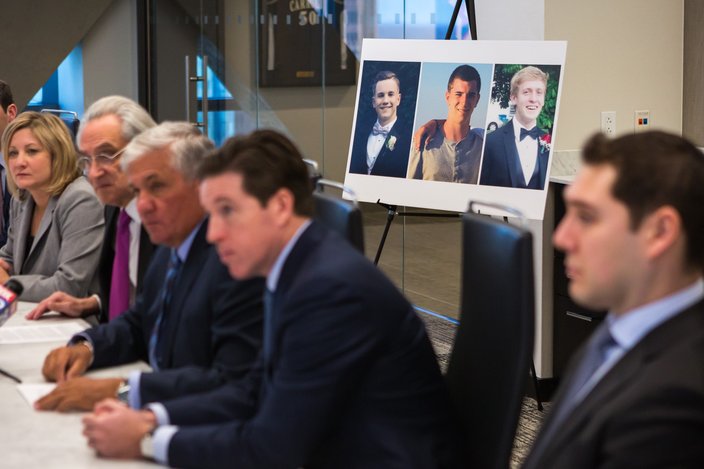 Each of the four victims allegedly was gunned down on the DiNardo family farm in Solebury Township after meeting DiNardo for an alleged marijuana deal early last July.

DiNardo and Kratz are accused of placing three of the bodies in a pig roaster and lighting it on fire before ultimately burying the bodies in a common grave elsewhere on the 90-acre farm.

The first of the four victims – Patrick – was the last found by investigators. After allegedly confessing to the killings, DiNardo told investigators where to find Patrick's body in exchange for removing the death penalty from consideration.

In December, both DiNardo and Kratz pleaded not guilty to a litany of charges for their alleged roles in the gruesome quadruple homicide and attempted cover-up.

"It's undescribable, the emotions I feel and the loss," said Melissa Fratanduono-Meo, the mother of Thomas Meo. "I never thought I would feel this and lose my son."

Meo, 21, of Plumstead Township, Bucks County, had completed a year at East Stroudsburg University, but was working in construction at the time of his death. A wrestler in high school, he enjoyed spending time with his girlfriend and playing with his younger sisters.

"He was bright and funny," Fratanduono-Meo said. "He was a lot of fun."

Finocchiaro, 19, of Middletown Township, Bucks County, was an "awesome person" with a "huge heart," according to his mother, Bonnie Finocchiaro.

"He would do anything for you, if asked," Finocchiaro said. "It didn't matter how big or small it was. For us as a family, it's a great loss. Nobody should ever have to deal with losing their child – and not in the way he was taken." 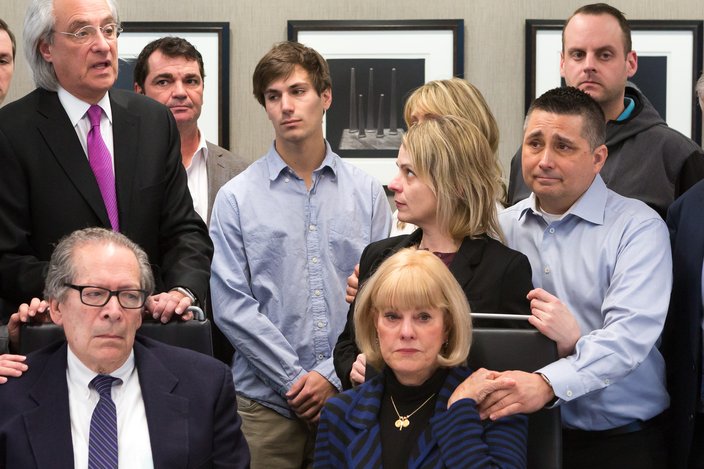 The families of Jimi Patrick, Tom Meo and Dean Finocchiaro listen as attorney Tom Kline speaks during a press conference at the law offices of Saltz, Mongeluzzi, Barrett and Bendesky on Monday, March 5, 2018.

The families' lawsuits allege the DiNardo family and their businesses failed to prevent an unstable Cosmo DiNardo from accessing his mother's .357 handgun and the business-owned equipment used in the grisly killings.

The lawsuits allege DiNardo had been previously involuntarily committed to a mental health facility, and had been banned from visiting the campuses of Holy Ghost Prep and Arcadia University in Glenside due to behavioral issues.

The DiNardo family should have known Cosmo DiNardo was legally prohibited from possessing a firearm, suffered from mental illness, including schizophrenia, according to the lawsuits.

The DiNardo family also should haven known that DiNardo regularly posted pictures and videos of him brandishing firearms and threatening to violently harm others, according to the lawsuits.

"Mentally-disturbed citizens and guns do not mix," said attorney Robert Mongeluzzi, who is representing the Meo family. "We have all been shocked and saddened by what has happened both here and in Florida. The parallels are remarkable."

According to prosecutors, DiNardo shot and killed Patrick with a .22-caliber rifle on July 5 while they were on a remote section of his family's farm. He then allegedly used a backhoe to dig a 6-foot hole and bury Patrick's body.

Two days later, DiNardo and Kratz allegedly killed Finocchiaro by shooting him with a .357 handgun as he left a barn on the farm, according to charging documents.

Later that day, they allegedly shot and killed Meo and Sturgis on the farm, according to prosecutors. DiNardo told investigators he ran over Meo's body with the backhoe to ensure he was dead.

The men then loaded the three bodies into a pig roaster and poured gasoline on them, according to charging documents. They allegedly set the bodies on fire and left the farm.

The next day, they allegedly used the backhoe to dig out a massive common grave, burying the tank with the bodies inside.

This lawsuits will help the families find out how DiNardo gained access to such weapons and equipment, Mongeluzzi said.

"Thre is no greater loss than a parent whose child has been taken from them, especially in such tragic and horrific circumstances," Mongeluzzi said. "They want to know what happened. They want to know how Cosmo DiNardo had access to these weapons and how this was able to occur."

The lawsuits, filed in the Philadelphia Court of Common Pleas, each seek damages in excess of $50,000.

"Had (DiNardo) not had access to the gun, the backhoe, the pig roaster and the farm itself, this crime could not have been committed," Kline said. "Those are the key touchstones of the investigation and of the lawsuit."

The family of Mark Sturgis, 22, of Pennsburg, Montgomery County, filed a lawsuit against the DiNardo family in December under the representation of Robert Ross. They did not join the other families Monday.

Attorney George Bochetto, who represents the DiNardo family, was out of the country Monday and unavailable to comment.