Have a fantasy football tight end problem? You're not alone... 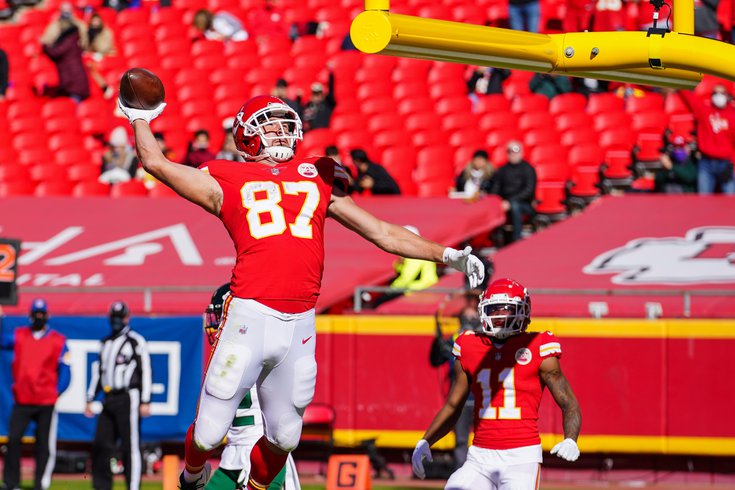 Tight end Travis Kelce has been pretty much a cheat code in fantasy football this season, when compared to every other NFL tight end.

If you are one of the lucky 10% or so of fantasy football team owners who has Travis Kelce on your team, you can disregard this article. Everyone else, we feel your pain.

Whether due to injuries or a changing landscape of scheme or just more substitutions across the NFL this season, tight ends have never been less relevant and less productive. It's almost been impossible to stream tight ends and get any kind of production whatsoever.

Zach Ertz is hurt and a shell of his former self. George Kittle is elite, when healthy, which he currently is not. Darren Waller — who is literally the second best fantasy tight end in 2020 — averages just 48 yards and less than half a touchdown per game.

The entire position is nothing but scraps. Which sort of begs the question to commissioners: is it time to just jettison the tight end spot?

Of course, the argument could be made that everyone is in the same boat and, why get rid of a position that has always been a part of fantasy? (Though this writer is firmly in favor of recent leagues' decisions to get rid of kickers.) But it's really lame to have most of your league praying for touchdown-or-bust players while more than half of the positional outputs each week is under six points.

Is this a trend? Or an anomaly? The stats below are half-PPR from the last two seasons:

So what is the reason for the drop off? Well, one has to do with the distribution of touchdowns. For a variety of reasons, perhaps an increase in cycling of tight ends on the field or more injuries, due to lack of practice time because of the pandemic, the top tight ends are not producing like fantasy owners think they should.

One of the most striking stats we found when comparing this season to last is how many players caught touchdowns. In 2020 so far, 67 different players at the tight end position in fantasy have caught a touchdown pass. Last year, through 10 games, 48 different tight ends caught a TD. Additionally, 31 tight ends had at least 20 catches, and this year it's 39.

This is great for the tight ends themselves, but not for fantasy football stats. Take a guy like Robert Tonyan, the seventh best tight end in the NFL this season.

After scoring 53.8 points (17.9 ppg) in Weeks 2-through-4 and getting on everyone's fantasy radar, the Packers undrafted free agent combined for 24.8 points in the most recent five week span (4.96 ppg). Perhaps it's because four other tight ends — Jace Sternberger, Josiah Deguara, Marcedes Lewis and John Lovett have combined to be on the field for 75% of Green Bay's snaps (Tonyan is on the field for 61% of them).

This is hardly a unique case. On the Bears, Jimmy Graham is the league's eighth best tight end, but he has fewer 10+ point games (4) than he does of games with less than six points (6). TE4 Mark Andrews has had five games scoring less than five fantasy points this season. TE3 Jonnu Smith has three games with less than four points and has scored just one touchdown in the last five weeks.

The 34.5% gap between the top tight end, Kelce, and No. 2 tight end, Waller, is astronomically bigger than the gaps at other positions so far through 10 games — just 8.5 % at quarterback (Patrick Mahomes to Russell Wilson), 3% at wide receiver (Davante Adams to Tyreek Hill), and 10% at running back (Alvin Kamara to Dalvin Cook).

So maybe next season, commissioners should just add another FLEX slot instead of forcing the dreariness and arbitrary position of tight end on fantasy team owners. The NFL is slowly transforming into a position-less league, much like the NBA is. The one guy who drafted Kelce in the first round in your league, even with great RBs and WRs still on the board, shouldn't be rewarded with this big of an advantage every single week.

Or maybe he should. Because if tight end is a position in my fantasy league next season, I am drafting Kelce.