On Wednesday, students across the country will leave class for 17 minutes, a min for each victim of the Parkland shooting 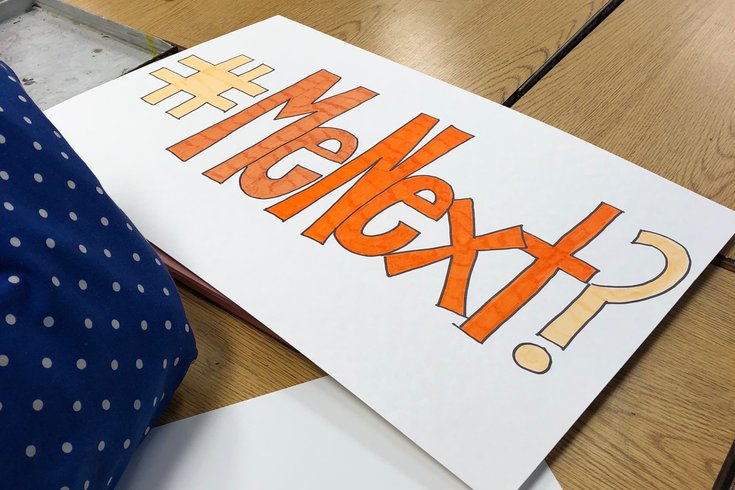 Students at Central High School in Philadelphia make signs to hold during a school walkout on Wednesday, one of many demonstrations against gun violence being held by teenagers throughout the country. In the aftermath of the Parkland school shooting, the #MeNext movement took flight on social media, predicting further tragedy if lawmakers don’t make gun control a priority.

Students across the Philadelphia region will abruptly walk out of class on Wednesday morning, joining teenagers across the country in a student-led demonstration aimed at ending school shootings.

As part of the National School Walkout, students will voluntarily leave their classrooms for 17 minutes – one minute for each of the 17 lives lost during the Feb. 14 mass shooting in Parkland, Florida.

The students hope their actions inspire lawmakers to toughen gun laws across the country. In the wake of the shooting at Marjory Stoneman High School, many students have called for universal background checks and bans on the military-style assault rifles frequently used by mass shooters.

"Talking about gun reform is not a new conversation," said Kaila Caffey, 18, a student at Central High School in Olney section of Philadelphia. "People have been talking about this for years. I think the fact that we have these student leaders – who are survivors of the shooting – come out on this national platform immediately afterward have made it more talked about."

Walkouts are planned at numerous schools throughout Philadelphia and its suburbs, including Central. There, students will join their peers nationwide by leaving school at 10 a.m. Several student speakers will address the crowd during a 17-minute event, which will include remembrance of the 17 lives lost in Florida.

"I think most people want to address gun violence on a national level," Caffey said. "There are some people who want to talk about what mental health looks like. ... There's a lot of pieces to the conversation."

William R. Hite, superintendent of the Philadelphia School District, sent a letter to parents last week, acknowledging that Philly students would be permitted to participate in the national demonstration. Students will be asked to gather in designated areas so that the walkouts take place in an organized and safe manner.

"However, schools will neither encourage nor discourage student walkouts, nor will we prevent students from participating or discipline them if they do," Hite wrote. "Regular activities will continue during the walkout, and students participating are expected to re-enter the building following the walkout."

"There is certainly interest among students in various schools, predominantly at the high school level," district spokesman Lee Whack said in an email. "That is part of the reason why we have put out clear communication to principals, teachers and parents/guardians." 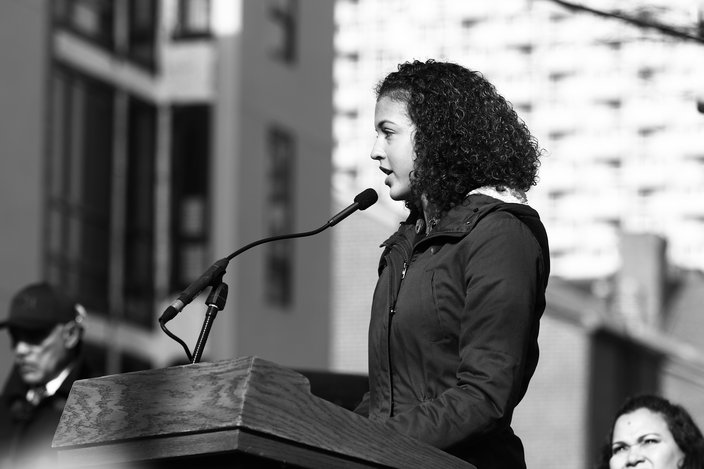 Kaila Caffey, shown here speaking at a prior demonstration, helped plan the student walkout that will take place Wednesday at Central High School in Philadelphia. Across the country, teenagers will leave class for 17 minutes as part of the National School Walkout, a demonstration against gun violence.

'THEY REALLY FEEL A LOT OF EMPATHY'

The demonstrations will not be limited to Philadelphia. Students at many suburban schools also intend to take part.

At Friends' Central School in Lower Merion Township, Montgomery County, students and faculty will line City Avenue for 17 minutes as part of a peaceful protest against gun violence. They will return to school to discuss the issue in discussion groups.

Galen Cassidy said the Parkland shooting has resonated with teenagers across the country, in part because the survivors have led the way. As senior, Cassidy was among 40 students and faculty who helped plan the walkout at Friends' Central.

"These people – my own age – are both heroes and victims," Cassidy said. "I'm struck by how much it would hurt for me to lose someone close to me by gun violence. ... But also the fact that these people are not any different than me.

"They're my age and they're getting involved in all this activism to bring about real change."

"I definitely think that the shootings build on each other," Cassidy said. "Every time you see one, it's a little harder to take it. It's a little more of a pattern. ... When you have shooting after shooting, it's clearly the fact that we're putting the weapons in people's hands to be able to do this."

At Garnet Valley High School in Glen Mills, Delaware County, students will hold a remembrance service at 10 a.m. for the 232 students who have died in school shootings since the Columbine shooting in 1999.

"They're going to have 232 backpacks labeled with the victims' names," Superintendent Marc S. Bertrando said. "As the students walk through the area that they've designated, there will be flowers that they'll be able to place on each of those bags."

"This is my 27th year in public education. I've never seen an event impact our students like this one did. It has had a profound impact on the students, as well as all the educators." –  Marc S. Bertrando, superintendent of Garnet Valley schools

The remembrance service – a voluntary event – was organized by students, Bertrando said. Advisers simply helped to facilitate a demonstration that ensured student safety and remained as apolitical as possible.

Such student activism – witnessed throughout the country – is atypical, Bertrando said.

"This is my 27th year in public education," Bertrando said. "I've never seen an event impact our students like this one did. It has had a profound impact on the students, as well as all the educators. Again, I can't really put my finger on why this particular situation had such a profound impact, because Sandy Hook was awful, as was Columbine.

"But for some reason, our high school kids especially have been really moved by what happened. In Garnet Valley, I haven't seen the political aspect of this. Our kids are taking the remembrance and respect approach, but they really feel a lot of empathy and sympathy for the families down there."

Likewise, the Upper Dublin School District in Montgomery County is permitting its high school and middle school students to gather outside their schools during the national demonstration. Only students and school personnel will be permitted. 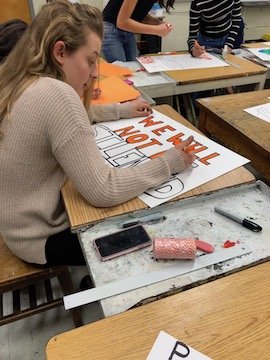 Leandra Brinkmann, a student at Central High School in Philadelphia, creates a sign to use during the National School Walkout, a student-led demonstration against gun violence.

"I am impressed by the desire of our students to have voice in the conversations that are swirling about us regarding past and recent episodes of violence in schools," Superintendent Deborah S. Wheeler wrote in a letter to parents. "I am even more impressed by the care that has been devoted by them to planning for what are intended as substantive yet measured and peaceful events on March 14."

At the district's high school, several students will speak against gun violence and bullying, while also stating their support for the Parkland families, Wheeler said. Similarly, students at Sandy Run Middle School will gather in silent reflection for 17 minutes.

Instead of a walkout, the Archdiocese of Philadelphia is encouraging each of its 17 high schools to hold a prayer service at noon. They also will include a period of silence in memory of the students killed in Parkland.

The day coincides with a universal visitation day, in which each of the high schools is hosting seventh grade students throughout the day.

"While we will not actively participate in general walkouts, we are working to ensure that the importance of this movement is addressed in our own way that is reflective of core Catholic identity," spokesman Ken Gavin said in an email. "This prayerful initiative will take into account the fact that 7th graders will be present during the day and may have different emotional needs."