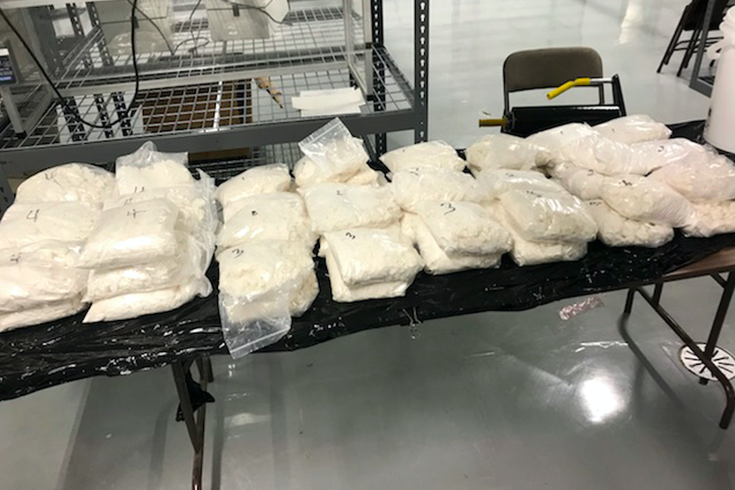 110 lbs (50 kilograms) of fentanyl seized from Chinese shipment at Area Port of Philadelphia on Monday, June 25, 2018.

Federal authorities intercepted nearly $1.7 million worth of fentanyl at the Area Port of Philadelphia last week, marking another seizure in an aggressive push to take the deadly synthetic opioid off the streets.

Customs & Border Protection officials said 110 pounds of the drug were found during a routine examination of a shipment of iron oxide that had arrived from China.

"Opioids, including fentanyl and its analogues, are a serious public health concern, and the importation of vast amounts of this deadly synthetic chemical compound is a national security threat," said Casey Durst, director of field operations in Baltimore for CBP.

Chinese suppliers have been linked to several cases in the Philadelphia area, including a local purchaser who used the since-shuttered dark web platform Alpha Bay and two men on the Main Line who were charged with making transactions to obtain fentanyl from China.

The synthetic opioid is 50-100 times more potent than morphine and has been largely responsible for a surge in overdose deaths both locally and nationally.

In response to the uptick in fentanyl shipments, CBP officials have increased preparedness training for its agents and dogs to safely detect and handle the substance.

"Customs and Border Protection remains committed to keeping our communities safe by combatting the flow of illicit drugs, including synthetic opioids, into the United States," said Durst.