In final bout, Bernard Hopkins knocked out of ring by Joe Smith Jr.

The 51-year old claims to have been 'shoved,' but maintains he won't fight again 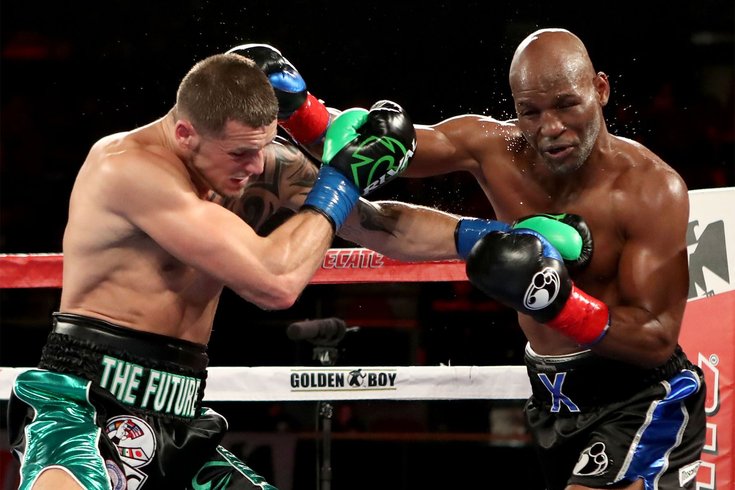 INGLEWOOD, Calif. — It always tends to end this way in boxing, and it doesn’t matter who it is. Boxing and age tend to eat its greats. It happened to Joe Louis. It happened to Muhammad Ali.

And on Saturday night, in the fabled, refurbished, Forum, in a fight billed as “The Final One,” it happened to Bernard Hopkins.

Joe Smith Jr., who was born on Sept. 20, 1989, 11 months after Hopkins’ pro debut on Oct. 11, 1988, threw a mild shock into the boxing world when he crashed Hopkins’ goodbye party by sending the 51-year-old legend and future Hall of Famer through the ropes to score a dramatic TKO 53 seconds into the eighth round of the scheduled 12-round light heavyweight bout.

Watch: @beastsmithjr knocks @THEREALBHOP out of the ring 53 seconds into round 8, ending the fight. #Final1 https://t.co/Pj2svLUlC9

It’s something no one wanted to see, yet it happened, ironically in the eighth, the very same round that Rocky Marciano ended Louis’ career 65 years ago in Madison Square Garden.

Smith (23-1, 19 KOs) now has a big name on his resume, doing something no other fighter ever did, and that’s stop “The Executioner.”

There was a sense from the opening bell that it was coming.

I’m done, I’m through. This is it. I have too much to lose. I have my daughter and my family to think about. ... I went out like a soldier. I know the fans know that.

When the end came, it literally arrived with a thud.

“I twisted my ankle. I couldn’t stand on my feet. They asked me if my ankle was okay. My leg was throbbing. It was killing me. The referee made the choice for me. I know for a fact, if I wasn’t pushed from the ring, the second half of that fight I would have come back and beat him. He was starting to fade out and he was getting tired. I have the kind of chin that could hold up to anything. He pushed me out of the ring.”

In the eighth, Smith cornered Hopkins, first landing a right behind Hopkins’ left ear. That punch seemed to stun B-Hop. Smith then followed with a left to the face, and another right, which sent Hopkins crashing through the ropes and down back first on the concrete surface under the ring. Hopkins disappeared amid cameramen and ringside officials, who tried to help him up, as referee Jack Reiss gave Hopkins a 20-count to the return.

But he appeared wobbly, out on his feet when Reiss reached 20 and waved it over.

But the replay doesn't lie. Despite the disappointing result, Hopkins isn't changing his minds about retirement.

“I’m done, I’m through. This is it," he continued. "I have too much to lose. I have my daughter and my family to think about. I’m happy with the other things that are going on in my life. I went out like a soldier. I know the fans know that.”

Hopkins entered in the ring in his old Executioner garb, with the black hood pulled over his head, to poor rendition of Frank Sinatra’s “My Way,” with the twist being “He did it Bernard’s way.”

Smith wasn’t exactly a joke. He stopped heavily favored Andrzej Fonfara back in June. Though he is extremely one dimensional. He comes forward, rarely uses his jab, and all he knows how to do is throw a hard right hand. In other words, a perfect foil for the cunning Hopkins (55-8-2, 32 KOs, 1 no-decision) and his counter tactics.

The 27-year-old found out quickly some of the old tricks by the old dog, like using his head as a third fist. Hopkins led with his large noggin right on Smith’s left eyebrow at around the 2:10 mark of the second round. But “B-Hop” didn’t really find a rhythm until the fourth round, when he outlanded Smith for the first time, 14-8.

This began taking a turn, though, that no one wanted to see. Hopkins, coming off nearly two years away from the ring, began showing that wear — and age.

Hopkins has always been that nebulous sports hero stuck between the two worlds of who he is, and who he wants to be.

The legendary Philly fighter began his career as a puncher, though was never really a one-punch knockout artist. Then he morphed into a tactician, and though his ingrained old-world skills allowed him to slip through the granite fists of Felix Trinidad, Kelly Pavlik, Antonio Tarver and Keith Holmes, he was never really a defensive stylist, either.

Outside the ring, the Executioner always yearned for respect.

The first decade of his career was spent as a peripheral contender who was largely ignored, to a defiant iconoclast, someone who was told constantly that he couldn’t do this and that, yet he continued to defy logic. Then, as his legacy and longevity grew parallel with one another, he transformed into a beloved, respected figure in the sport of boxing — a curious role he winces at today, because as he said himself, “You work for something your whole life to achieve, that respect, that feeling where everyone embraces you, and when you get there, you don’t know how to handle it, like a kicked dog welcomed into a loving home, it takes time to adjust. It’s still hard for me to hear people cheering for me to win, because I always drew energy on being the guy no expected to win.”

His career and life has been built on the unexpected.

On Saturday night, the expected finally arrived in the specter of a Long Island, New York, construction worker with a lethal right hand.

Smith was greeted with a spattering of boos afterward, but it was his moment.

“This is the best feeling in the world to do something no one else ever did before, stopping a great like Bernard Hopkins,” Smith said. “Every time I threw the right hand, he dropped his left. So I paused my jab out there for a second and threw the right hand, and I saw it hurt him. I landed the left hook to finish the job.

“I hit him with four or five clean shots and I knew he wouldn’t get up from that. This might have been his goodbye, but this was my coming-out party. I needed my career to continue. I’m a little lost for words, because I did exactly what I wanted to do. How often does that happen?”

Not to Bernard Hopkins. Not on Saturday night.