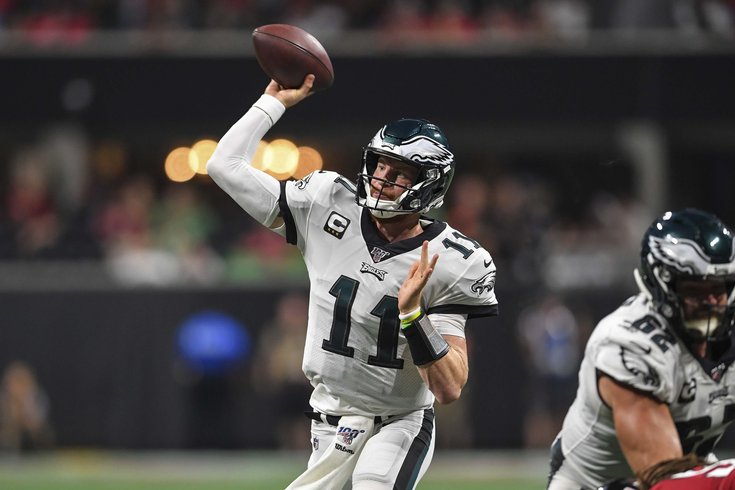 Philadelphia Eagles quarterback Carson Wentz (11) passes against the Atlanta Falcons during the first half at Mercedes-Benz Stadium.

Carson Wentz did his best to give an injury-ravaged Eagles team a chance to win in Atlanta, but a comeback attempt came up short in the fourth quarter, with Philadelphia suffering a 24-20 defeat at the hands of the Falcons.

Here's what I saw on Sunday night, or at least what I could turn into a coherent thought while trying to pick my brain off of the floor.

• Credit to Jim Schwartz, a play-caller who tends to prefer rushing with just his front four, for mixing in more blitzes than we're used to seeing from him. By catching the Falcons off guard with some pressure from linebackers and safeties, the Eagles ended up surprising Matt Ryan and keeping Atlanta in check.

The biggest dividend came midway through the third quarter when pressure up the middle from Malcolm Jenkins created a big takeaway for Philadelphia.

But that wasn't the only time they broke through the line to come up with a big play. Pressure came in the form of Andrew Sendejo early in the fourth quarter, and Matt Ryan was not even a little prepared for it, taking a big sack on third down to give the Eagles the ball back.

Philadelphia's ability to disguise their blitzes was as good as we have probably ever seen it during Schwartz's time in Philadelphia. It was the defense that allowed the Eagles to hang around in this game longer than the offense probably deserved to, and Schwartz deserves credit for breaking from his usual strategies. Sometimes you have to shake things up if you want to fool an opponent you've played a lot in recent years.

It's not like this came back to bite them, nope, definitely didn't happen.

• There were a lot of cowards in coaches chairs around the NFL on Sunday, with Cardinals head honcho Kliff Kingsbury proving to be an especially big idiot that cost his team a game with red-zone field goal attempts.

Doug Pederson, as he tends to do, did the opposite and showed some stones in the red zone. Wentz rewarded him in the third quarter with a touchdown strike to Nelson Agholor.

Beyond this being what the math says you should do if you want to win, it's also just better to watch. So thanks for that, Doug.

• I wanted to throw Nate Gerry's interception in The Ugly after he made a boneheaded attempt to run it out and was miraculously saved from his own stupidity, but listen, he still came up with a turnover and that means something.

Just take the easy touchback next time, brother. And maybe work on a new nickname? Yeesh.

• Few will remember this Wentz performance when it's time to reflect on the great nights of his career, whenever it eventually comes to a close. It was not his best night by a long-shot. But the second half was a very important one for Philadelphia's young quarterback, who managed to get his guys over the line without having anything close to his best stuff.

It's a performance reminiscent of some of Nick Foles' wins in years past, where you'd be mystified by some of his mistakes early in the game and then blown away by what he was able to do when the spotlight was brightest. The play of the game and the season so far came on a critical third-down late in the fourth quarter, when Wentz somehow fired a strike while he was being dragged to the turf for a potential sack. There are maybe five quarterbacks in the league who can make this play:

I’m at a loss for words at how Carson Wentz completed this pass. Unbelievable. pic.twitter.com/LzyInktuiS

Without the services of his two best receivers and with the offensive line struggling to keep him outright, Wentz consistently bought time and kept his team's hopes alive. That is the mark of a franchise quarterback.

Legacies are not built by putting up crazy numbers – just ask Matthew Stafford. Legacies are built when you're able to pull miracles out of thin air even when you don't have your best stuff, even when your receiving core is depleted, even when you have to take a trip to the medical tent midway through the game. It was an absolutely tremendous rally from Wentz and Co., and if not for an all-time bad drop from Agholor, we are talking about that one for a while.

• After lavishing all that praise on Schwartz for switching up his tendencies, it was a mortal lock that it was going to come back to haunt them in a big moment. Lo and behold, on a play that could have effectively ended Atlanta's chances to win, Philadelphia's blitz left them exposed and allowed Julio Jones to score a backbreaking touchdown on fourth down.

THE BEST RECEIVER ON THE PLANET.

After seeing blitzes for a lot of the night, Matt Ryan finally wised up and turned the tables on Philly. The lack of a deep safety was an absolute killer here, as it turned what would have been a frustrating first-down pickup into a gut-punch touchdown.

• The way you pull out a win after playing like trash for an entire half is by minimizing mistakes, getting a little bit of momentum rolling, and giving your playmakers a chance to come up big. What you can't do, which Corey Clement did, is fumble the ball on the opening kickoff and hand the opponent a golden opportunity to pad their lead.

You can't control or properly prepare for getting hit with a wave of injuries in the span of 30 minutes. It's hard to bounce back when your top two receiving options get hurt and other players are in and out of the medical tent all night. But it can be done, and mistakes like that fumble from Clement made it that much harder to do so.

• It may be true that the Eagles do not have a running back as good as Dalvin Cook, who tore the Falcons up in Week 1. But after watching Atlanta get gashed on the ground last week, after losing top receiving weapons early in the game, and while dealing with a potential Wentz injury, it's mystifying that the Eagles didn't make more of an effort to win this game on the ground.

The way the Eagles lined up on Sunday night, you would have thought they were trying to overcome a substantial deficit. But for most of the game, they were within one score and could have afforded to try to bleed out the Falcons on the ground. For whatever reason, Doug Pederson decided not to go that route, and when they did run the ball they didn't exactly mix it up or attempt to catch Atlanta off guard.

(All of this being said, they weren't exactly lighting the world on fire when they did run the ball, so maybe you just throw your hands up and say they were making the best of a bad situation.)

• Issac Seumalo had an absolute disaster of a game on Sunday night. Missed blocks, holding penalties, the whole nine yards. A lot of their problems up front can be traced back to him.

• You will not see many drops more crushing than the one from Nelson Agholor late in the fourth quarter. He had nothing but paydirt in front of him after Wentz tossed him a dime down the sideline, and he blew his best chance to be a hero.

Absolutely brutal. And then all Agholor did was go out there and... totally redeem himself?

Okay, maybe not totally redeem. They still lost. But football is an absolutely preposterous sport, I'll tell you that.

• A Falcons cheerleader took a hit on the sideline from Devonta Freeman and bounced back from it better than anyone on the Eagles' offense on Sunday.

• The Eagles thought they were within a field goal of the Falcons after Wentz dove for the goal line for a two-point conversion. But like all scoring plays, it was reviewed, and the officials showed off an innovative new way to make a mockery of the sport when they explained why the ruling had been overturned.

Ruling that Wentz was "giving himself up" at the goal line on a scoring play where you only have one chance to punch it in is an absolutely outrageous interpretation. If that play happens on first and 10 at your own 30-yard line, I can understand viewing it that way. But how fundamentally do you have to misunderstand football if you view a meaningless dive to protect yourself the same as one at the goal line for a quarterback with a history of health issues?

I'm not sure why it's so hard for the NFL to construct a rulebook that's built on logic and common sense, but they screw stuff up like this all the time, and only fix it when they screw up an outcome so badly that it becomes a national controversy. There has to be a better way forward than that.

• I would also like an explanation for why Wentz was ruled down as he was breaking free from a sack in the pocket. That's another new one. Protecting the quarterback is generally a good thing, but the officials went way past the logical extreme to do so.

• We'll have to wait and see how serious all these injuries are to guys like DeSean Jackson, Alshon Jeffery, Timmy Jernigan, Jason Peters (maybe?) and more, but it's early in the season to have so many guys banged up.