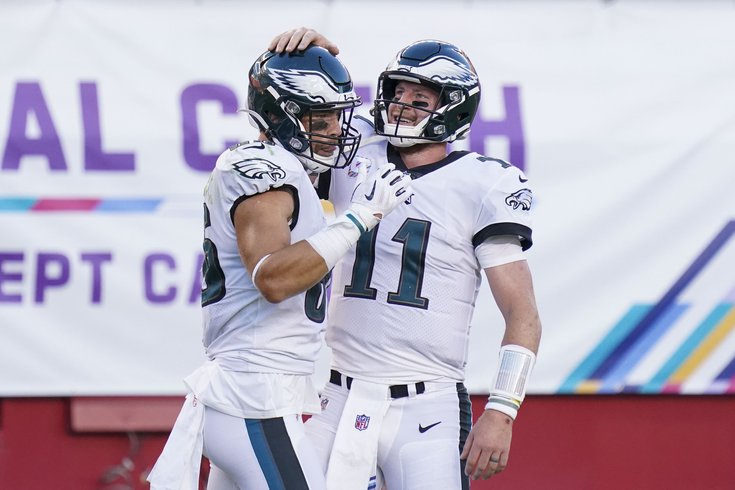 The Eagles look like a team missing most of its important weapons, but they are clinging to an 8-7 lead over the 49ers at halftime anyway, just 30 minutes away from a surprise road victory.

• Derek Barnett had himself a hell of a first half against the 49ers, and it came when you probably least expected it. Matched up against tackle Trent Williams, long considered one of the premier offensive linemen in the league, Barnett nonetheless made a big impact across the first 30 minutes, picking up a combined sack with Javon Hargrave and blowing up an outside run so bad that he made Nate Gerry look like a competent linebacker. Imagine that.

Barnett was the early highlight of the half for the Eagles on defense but he wasn't alone disrupting the 49ers in the backfield. Welcome to the spotlight, Genard Avery!

Finally getting into the mix after what felt like an insanely long wait, Avery came up with his first sack on a play the Eagles blew up in the second quarter, continuing a trend of the Eagles pressuring backup quarterback Nick Mullens, who couldn't do much more than dump throws off to George Kittle or overthrow his wide receivers. And Avery came up with another big play late in the half, forcing a bad throw from Mullens that dropped right into the arms of Rodney McLeod.

Avery applies the pressure and McLeod comes up with the clutch takeaway.#PHIvsSF | #FlyEaglesFly

Can they really lose the game where they came up with their first turnover of the season? Things are looking good right now.

• Philadelphia's third offensive series was one of the best they've had in weeks, and it says something that it didn't involve any especially creative plays or high-level execution for Carson Wentz. Aided by some cheap 49ers penalties that helped move them down the field, the Eagles ran the ball and relied on Miles Sanders, with the QB sprinkling in just enough to get them into the endzone.

Here's where Wentz deserves the most credit for their first scoring drive — he appeared to see the blitz coming on the play immediately preceding his touchdown run, checking down to a pass to Sanders out of the backfield that got him the ball with room to work with. With good reads coming few and far between for Wentz this season, you have to take what you can get. And he completed a layup throw for the pick up to boot.

The other big positive for Wentz is that his legs have been a legitimate weapon recently, and that trend continued on the option run that went for six points.

.@cj_wentz keeps it for the 11-yard TD run! #FlyEaglesFly

It's one way to work around the accuracy/consistency issues. Doug Pederson even drew up a designed bootleg for Wentz in the first quarter, and to the surprise of almost no one watching at home, it led to a nice throw for a first down to Greg Ward.

• We said it last week, most people believe it, and it remains true now: the Eagles are going to have to ride Sanders hard, because he is consistently their best and most dangerous weapon on offense right now. He's a YAC machine as a receiver out of the backfield, and he has cut out a lot of the B.S. that held him back as a runner in the early stages of last season. Sanders bursts through holes with purpose on most of his touches now, a departure from the hesitant, jittery running he flashed early on

They don't really have much choice but to give him the ball. Ward can only win so many battles seven yards from the line of scrimmage, and Wentz can only throw Ertz the ball so many times before a route gets jumped.

One surprise from his first half was the success Philadelphia had running the ball on the left side of the line, with inexperienced tackle Jordan Mailata doing a great job to open up holes for Philadelphia's lead runner. If not for a costly penalty Mailata took on a third-and-one around midfield, we'd be talking a lot more about the job he did in pass protection and run blocking.

• I'm not sure the Eagles are capable of bringing Jalen Hurts into the fold as a passer without Philadelphia burning down from the hot takes that would follow, but he has certainly made teams fear him a bit in the read-option game so far. Miles Sanders went untouched around the left side of the line on a Hurts play late in the first half because the 49ers were fearful of Hurts burning them on the option. I want to see more of it.

• Not often you're going to see me showing love to an Eagles linebacker in this space, but T.J. Edwards was pretty damn good in the first half.

• Credit where it's due, this is a great play to come up with the ball before it hits the turf. But this is a microcosm of Wentz's season, and the longer this miserable run of play lasts, the easier it will be to sum up his whole career with plays like this:

Tipped and PICKED for the @49ers interception! #FTTB

Wentz is having to make something out of nothing a lot of the time, but that's not an excuse to force plays that aren't there and spin himself into poor decisions. When you're making poor decisions as a rookie, the expectation is you'll grow out of those as you get more reps and better at film prepping for opponents.

The offensive line issues and wide receiver injuries are legitimate excuses, the latter especially so when you look at how the Niners defended Philly in the first half. They showed absolutely no respect for the deep ball with all of Philadelphia's speed threats out due to injury, forcing the Eagles to try to run against stacked boxes and beat tight coverage underneath.

But that's all the more reason Wentz has to be sharper on the plays that have to be made, the underneath/"layup" throws that are there to be had. Can't have him out there clapping like Al Horford when he throws ducks. Richard Rodgers was streaking open down the sideline on a first-half play that Wentz way underthrew, nearly turning it into an interception. Can't happen.

Before anyone thinks I'm being too negative, I would say there were encouraging signs throughout an average-ish performance in the first 30 minutes. But average isn't going to cut it with this group.

• Let's reemphasize how bad the Jordan Mailata penalty was here. If not for that penalty, the Eagles likely have two chances to sneak the ball through the middle of San Francisco's line to extend the drive. You move the chains there, and the offense is able to sustain more momentum and keep feeding the ball to Sanders. Too bad.

• By the time the second series rolled around for Philadelphia — two-and-a-half-minutes into the game, for those keeping track at home — they were already down one of their most important offensive players. Lane Johnson walking down the tunnel with his helmet off is not something you ever want to see unless it's part of a post-game celebration, and this banged-up line can't exactly afford to keep losing starters.

Johnson would return for the next series, so perhaps it wasn't a big deal, but it says a lot about where the team is at that these moments are enough to cause anxiety across the tri-state area.

Things only got worse from there. On the play where 49ers rookie Brandon Aiyuk embarrassed most of the Eagles' secondary, Darius Slay took what appeared to be a shot from the knee and went down near the sideline, hobbling back to the Eagles' side of the field in pain. Again, he would return to action after the scary looking retreat to the sideline, so there was good news, but I don't blame anyone for being sensitive to bad news.

• When is the last time you can remember an Eagles wide receiver making a play like this?

They have had plenty of "nice" players at wideout recently, but I feel like I watch wide receivers make game-breaking plays over and over again around the league. Are they really this bad at either evaluating talent at the position or executing to make the most of that talent?