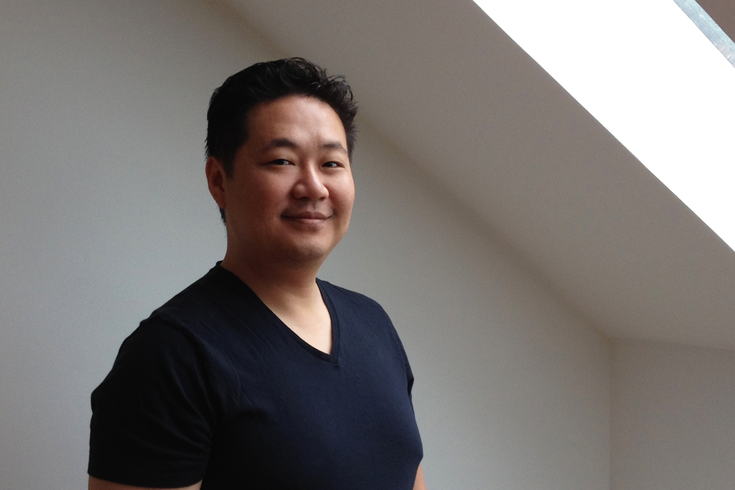 As an associate professor of Digital Media at Drexel University, the co-founder of Drexel's Game Design Program, the founding director of the Entrepreneurial Game Studio at Drexel's ExCITe Center, and an in-demand member of the global tech scene, Philly's emerging techies know Frank Lee very well.

Not into tech? You still might know him, but as the guy who brought Pong and Tetris to life on the face of the Cira Centre, setting and then breaking Guinness World Records in the process.

With his work at the Entrepreneurial Game Studio (EGS), Lee is molding the young minds creating the video games of tomorrow. In a medium where the possibilities really are endless, Lee is playing a crucial role in shining a spotlight on not only Philadelphia's talent, but on the city's potential as a gaming and tech hub. Below, Lee chatted about EGS's latest projects and what his dream Cira Centre game would look like.

In December, EGS kicked off a workshop series for kids in Philadelphia to try their hands at designing a new game to be played on the Cira Centre in fall 2016. How has the program been going so far?

One thing that I’m deeply passionate about is getting kids, especially girls, interested in STEM (Science, Technology, Engineering, and Mathematics) through their interest in video games. I have collaborated with Techgirlz for a while now to offer game design workshops to middle school girls. With funding from the Entertainment Software Association Foundation, EGS created two self-contained “Techshopz in a Box,” publicly available through Techgirlz. This makes our Game Design I and II curricula, which includes a Unity tutorial for facilitators, available to anyone with internet access. We have also worked with the Girl Scouts of Eastern Pennsylvania to host local troops for game design workshops where they have designed games for the Cira Centre on paper. Based on these past efforts, the idea of workshops, and ultimately a contest, for kids to make games for the Cira Centre was born.

This year, with funding from Intel, we are running workshops in the Drexel Expressive and Creative Interactive Technologies (ExCITe) Center for approximately 200 middle school students from partnering charter schools and the Girl Scouts of Central and Southern New Jersey. During these workshops, students will design games for the Cira Centre. We hope to have a public showcase of a selection of those games in late June or early July. To make this happen we’ve been very busy for the past two months, but I think we are on pace. The first of these workshops is scheduled for the end of March.
When we announced these Intel-funded workshops late last year we were swamped with interest from over 13 schools in both Pennsylvania and New Jersey. There were over 1200 kids interested in our workshop, which was much greater than our capacity. Time and time again, schools, teachers, and even some individual parents expressed the need for CS opportunities for students ages 11-15. I think this bodes well for our larger vision to build these workshops into a regional, and then potentially a national, contest for kids to make the world's largest video game.

Support for diversity in gaming & tech has really grown in the past few years. How do you instill those values in the undergrads creating companies of their own at EGS?

I make it clear that one of the core missions of EGS is to get young girls and women interested in technology through video games. We work extensively with Techgirlz as well as the Girl Scouts to get girls excited about computer science by making video games. With the Intel project, we’ve been actively partnering with organizations and schools that engage with youth in underserved regions within Philadelphia and stretching into Southern New Jersey. This fits well with Drexel’s strategic vision of becoming the nation’s most civically engaged urban university.

The EGS has a student lab with over 40 undergraduate and a handful of graduate students. By design, EGS is open to all students regardless of major, as long as they are passionate about games. We don’t require technical skills, and we don’t require any experience in game development because we want to get a diverse group of students with different abilities and strengths. There are a lot of barriers to entry for minoritized students. We want to encourage enthusiasm and help those students find the resources they need to build video games within Drexel, even if it’s not their area of study.

Our EGS students serve as role models for students that participate in our workshops. Many volunteer their weekend time to help us run these workshops. We hope that students in the EGS will carry the joy and desire to mentor young students with them, even when they leave Drexel.

Additionally, the EGS holds a weekly meeting for students, and at least once a term we invite in a games scholar, critic, or developer to talk to the group. Our most recent talks include Anita Sarkeesian, a feminist media critic, and Adam Bormann, the lead systems developer at Hangar 13. We hope that by bringing in a diverse range of experts on games we can inspire students to broaden their world views of not only what makes a good game, but also what a “gamer” or “developer” looks like.

In addition to Tetris and Pong, what classic video game would you like to see on the Cira Centre & why?

Pong on the Cira Centre was a love letter to the very first video game that I ever played; Pong on the Atari 2600. I made a realization then -  you don’t have to just watch TV passively; you can actually interact! Pong was also important culturally because it was the first commercial video game. However, Tetris was the first game that made me appreciate “design” in game design. Despite the minimalism of its game elements and mechanics, it is able to elicit such joy and passion. That same joy and passion is what I strive for while using the Cira Centre display.

I don’t have any immediate plans for a new game for the Cira Centre (other than the games students will design in our workshops). That being said, I do have some dreams.

The first dream would be to reach back even further in time, to 1958, when the very first video game, "Tennis for Two," was released. I’ve also thought about simulating early handheld LED games from my childhood like Mattel's Football, Basketball, and Baseball. Those would probably work well on the Cira Centre. I’ve also dreamed about making a game that utilized the display at the top of the PECO building as well as the Cira Centre display to create a single multi-building game. We will see.

What new games are you excited about right now?
From our own Entrepreneurial Game Studio, I'm really excited about Sole from Gossamer Games. The aesthetic of that game is awesome. From the commercial side, I'm keeping my eyes on both Mirror's Edge: Catalyst as well as Detroit: Become Human.

Which are you more likely to play & why: mobile, portable or console games?
While I play all games, I tend to play more on the mobile simply because I always have my iPhone with me. But I also think there is much more creativity in mobile games as well. Yes, I know that there are a lot of crappy games and knockoffs in mobile, but there are some amazingly creative games in mobile as well, that you would be hard-pressed to find on Consoles.