By Brian Hickey
PhillyVoice Staff
Lifestyle Five for Friday
from 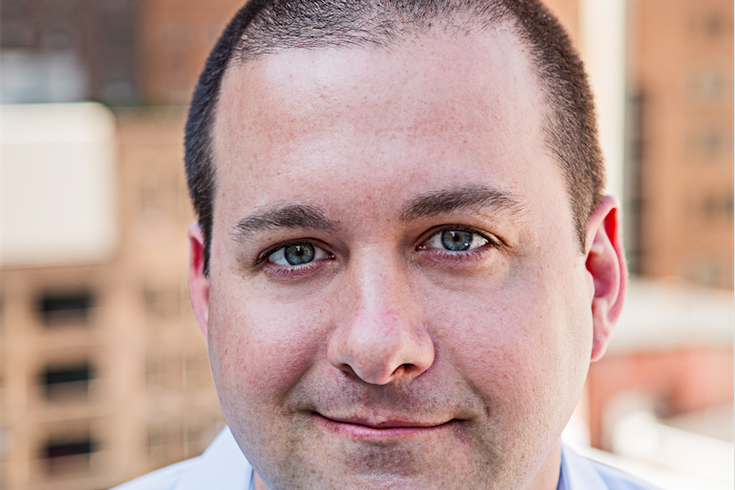 Michael Maher, the 33-year-old co-founder of Benjamin's Desk, has his eyes on redefining the Philadelphia area's real-estate industry.

Michael Maher, a South Jersey native, has quite an impressive resume, including time as a naval officer, co-founder and chairman of Philadelphia co-working network Benjamin’s Desk and an entrepreneur with an eye toward real estate, technology and the merging thereof.

The 33-year-old, whose wife, Jennifer, was integral to getting the co-working business idea off the ground, also co-founded a startup called Houwzer, through which he’s “on a mission to disrupt every angle of real estate. There's a paradigm shift that's happening right now, and I'm on the cutting edge of it all.”

The name of Maher’s years-old game is growth and disruption.

That was enough to pique our interest in having him break it down even further for PhillyVoice – full disclosure: we’re a Benjamin’s Desk customer – in a Five for Friday interview. Below, Maher shares details of his business roots and his plans for the future.

Let’s start off with Benjamin’s Desk. How did it come to be, how has it grown, and what’s the vision for the future?

My wife and I were looking for a place to work and canvassed the region for different co-working spaces. I’d read an article about The Makery in Brooklyn. I was fascinated by the real-estate aspect and collaboration in spaces like these. This was in 2009, and we started to look for spaces like that in Philadelphia and found Indy Hall.

My wife and I started to look at whether we could set up a business, real estate and technology. It’s a good match of the two. I got my MBA from Villanova, grad school was about real estate, and built a model around what it would look like to build a co-working environment that was [type of business] agnostic. With a Small Business Association loan and $100,000 on credit cards, we built Benjamin’s Desk.

The growth has been organic, but it’s about to accelerate. We’re seeing national players raise a ton of money, but small boutiques are failing. We’re a local company that represents all that’s great about local community-based collaboration. We have a vision and a team that can execute as good as the big guys and plan to expand our footprint in the region, not just in the city. Next year, [we hope to expand by] three to five locations, with that doubling or tripling in future years.

What does Benjamin’s Desk’s success so far say about the future of the sharing economy?

Co-working in a sharing economy plays into the millennial workforce trends. By 2020, 50 to 60 percent of the workforce could be independent contractors. They go to work, exchange ideas, build businesses together.

Your brother said that he considered you the “top young entrepreneur in Philly.” Whether you agree with him boasting like that or not, what would that be based upon?

I’d never consider myself to be in that category. I’m a humble guy who likes to stay behind the scenes.

One of the things I’m trying to do is leverage, what I’ve learned about leveraging businesses, with a parent company called Paradigm. It’s the holding company for Benjamin’s Desk but will also be the parent company for Shift Innovation, a consulting/management [firm] about workplaces, helping companies get their first space.

I found myself in a unique position to build something and surround myself with an amazing team that lets me step back and look at the bigger picture.

To a business-untrained mind, it seems like your Houwzer effort attempts to redefine the real-estate business. Is that the case?

It’s all about disturbing the traditional way to sell homes. We’re the first to sell homes for free; we only make money representing the buyer. And we have salaried real-estate agents instead of relying on commissions.

We built it from the ground up because we don’t believe [it warrants] 6 percent to sell a house anymore.

We subscribe to the triple bottom line; we care deeply about our agents and the community. It’s an interesting thing that no real-estate broker has done.

How did your time in the U.S. Navy, and life as a whole, prepare you for the world of entrepreneurship?

My time in the Navy served me well in terms of being able to be agile and focused at same time. Getting from Point A to Point B – in the Navy – is never a direct path. You have to have a plan, but you can never fall in love with that plan, so it’s analogous to business, where we’re trying to accomplish a mission.

The stakes are much higher in the service, but you need to be able to have a mindset where it’s OK to fail. Don’t be afraid of failure in the startup world, but you can’t accept failure either. It’s all about how you respond to failure.

I come from a family of athletes. My father was a coach, youth soccer [with the South Jersey Outlaws program], my whole life [starting as a youth in Middle Township, Cape May County]. He’s had dozens of soccer players go onto major programs across the country. The fact that he always instilled traits – for players, including myself – that, not only were they playing, but they were the captains of their teams. Keeping integrity but pushing well beyond comfort zones.

You never achieve anything great in life unless you’re willing to push yourself beyond your comfort zone. Valuing people and integrity matters. Those principles continue to serve me well.