Five matchups to watch Sunday night between the Eagles and Cardinals 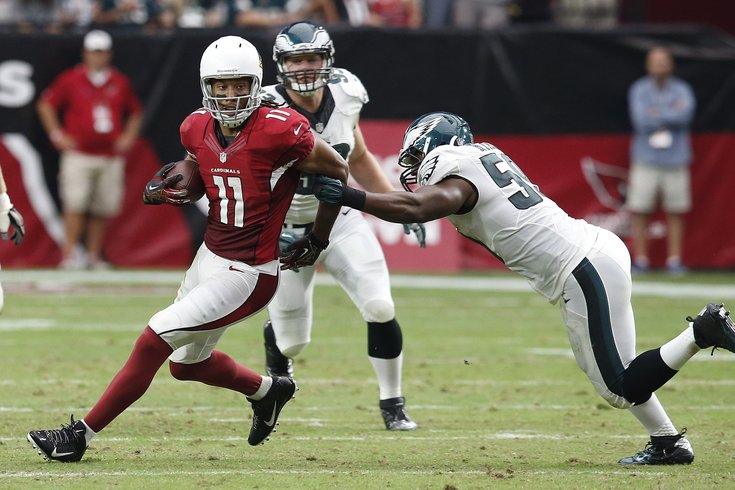 The Philadelphia Eagles are suddenly rolling after two consecutive wins over the Patriots and Bills. This Sunday night, they'll face the high-powered Arizona Cardinals, who are explosive on both sides of the ball. Here are five matchups to watch:

1) Larry Fitzgerald vs everybody

Can somebody... anybody... slow down Larry Fitzgerald? Here are Fitzy's performances against the Eagles over his career:

I'd say the Eagles should hit him in the knee with a tire iron before the game, but that'll just make him mad.

And then there's Malcolm Floyd and John Brown to contend with too. This is easily the best WR trio the Eagles will face this season.

2) The Eagles' offensive line against the Cardinals' blitzing defense

Per Chip Kelly, the Cardinals blitz more than any team in the NFL.

"They lead the National Football League in blitzing," said Kelly. "They blitz the most. I think they are right at about 50 percent. So one out of every two snaps, somebody is coming, and they bring them from all different areas. So they have continued what Todd [Bowles] was doing there and actually are doing it a little bit more. So it's something, we had a high blitz number going into the Bills game and really had to prepare for that. You always have to prepare for blitz, but these last two opponents, the Bills and the Cardinals, are teams that are really going to come after you. A big part of our preparation this week is trying to handle those blitzes and how we're going to be able to pick them up."

One thing Sam Bradford typically does that former Eagles quarterbacks like Michael Vick and Nick Foles often did not is get the ball out quickly. The Eagles' quick passing attack and the usage of Darren Sproles on screens are obvious counters to the Cardinals' aggressive blitzing scheme.

3) Fletcher Cox against the right side of the Cardinals' OL

The left side of the Cardinals' offensive line is strong, with Jared Veldheer at LT and Mike Iupati at LG. The right side, however, can be beaten. I suspect the Eagles will look to get Fletcher Cox matched up early and often on RG Ted Larsen, who is perhaps the Cardinals' weakest link along their line.

4) The Eagles' rushing attack against the Cardinals' athletic defense

The Cardinals have a very light defense. For example, their three-man front averages just 295 pounds. Linebacker Deone Bucannon was a safety in college, and weighs 211 pounds. Safety Tyrann Matthieu was a corner in college and weighs just 186. As you might expect from such a light group, they can all run.

Unfortunately, the Eagles employ somewhat of a finesse run game, often opting for slow-developing outside zone plays that athletic defenses can beat by swarming to the football. If there was ever a time to run it straight ahead, it would be this week against the Cardinals' undersized defense.

Let's not sugarcoat it -- The Cardinals are a better football team than the Eagles. When you're over-matched to the degree the Eagles will be this Sunday, ideally your special teams units can make a play to swing a game. Over the last two weeks, the Eagles have come up with enormous special teams plays. Can they summon one or two more?