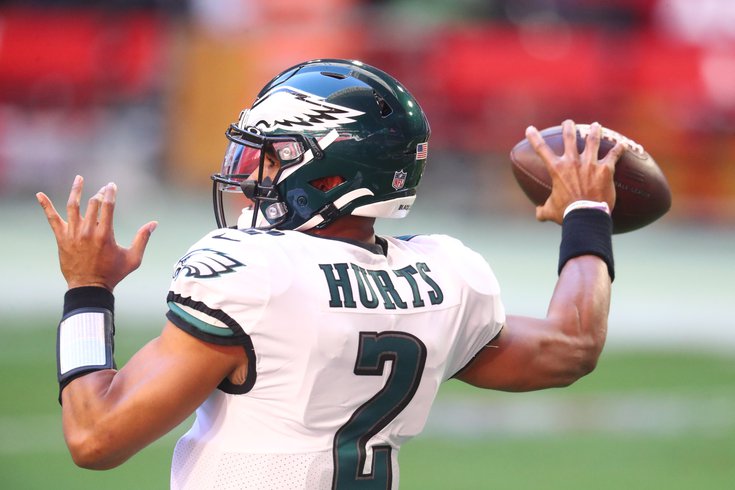 If you're reading this, you've surely gotten up to speed on the importance of Sunday's Eagles-Cowboys game, but just in case, we'll catch you up.

A win for the Eagles, paired with a loss by Washington (which also plays in the late afternoon slate) and the Giants (who must lost to either the Ravens this week or Cowboys next week) will set up an NFC East championship game in Week 17. A loss by the Eagles, or a win by Washington against Carolina will end Philadelphia's ridiculous playoff hopes and put them in position to draft in the top 10 this April.

Currently, the Eagles are two-point favorites, according to TheLines.com, but unlike last week, there are a ton more people picking the Birds to win this one after seeing Jalen Hurts burst onto the scene in his second start in Arizona last week. How will Hurts perform in his first Dallas Week? We've already broken down the injuries for both sides, provided our own predictions, and rounded up some from the local and national media. We've also provided picks for every game this week.

Now, as we do every weekend, let's take a look at some numbers to watch in this one, in the form of our five over/unders...

That's the current total being offered over at DraftKings, according to TheLines.com and as sportbooks tend to do, they have it pretty spot on.

Of our seven staffers picking this game, four picked the over and three picked the under. With the Cowboys issues at stopping the run and the Eagles issues at stopping the pass, this could could be a shootout. However, the Eagles average a mere 21.6 points per game, the seventh fewest in football. Dallas is in the middle of the pack averaging 24.1. Some simple math puts the teams at 45.7 combined total points.

But this is the NFC East, and these defenses can be beat. Expect this one to be a relatively high scoring affair with some helpful fantasy stats for those in a championship bout this week.

A week ago, my PhillyVoice colleague Matt Mullin incorrectly picked Jalen Hurts to go under, on his arbitrary total of 274.5 yards (passing and rushing combined). Hurts, of course, slammed the over, throwing for 338 yards and running for 63 more for a total of 401 yards.

We'll fight the urge to set our own arbitrary number at 400 yards, though the Cowboys do boast one of the worst rushing defenses in all of football, and Hurts should be able to move the ball effectively with his legs in this one, no problem.

One of the main things that surprised many was that Hurts had a "big boy" game in his second NFL start, posting real franchise player numbers by passing for 300+ yards and three touchdowns (and a fourth on the ground) — though he did only complete 54% of his passes. In the hope that Hurts is a player capable of posting those kinds of numbers week in and week out, we are expecting another productive day for the rookie from Oklahoma.

Carson Wentz was responsible for the vast majority of the Eagles' fifth-worst 23 turnovers this season, which is a big reason why we are going with the under on this one. Philly and Dallas have 47 combined turnovers in 2020, each team in the bottom five in this stat category. Which means that the teams, on average, turn it over 1.7 times per game apiece.

Will this be a sloppy turnover-fest? Hurts has protected the ball more than Wentz has, and Andy Dalton's veteran presence should help Dallas hang onto the ball as well. It's my expectation that this game will be played more cleanly and with a lot more offense than the first matchup.

This is just about the combined weekly average in receiving yards for the Cowboys' top trio of wideouts. With the Eagles secondary reeling from injury, there is almost no chance this number is below 175. The Eagles may be able to handle the ground game but there will be open receivers and receivers drawing mismatches — particularly with Rodney McLeod and Avonte Maddox sidelined.

There is a good chance Philly's top cornerback Darius Slay plays, after missing last week against the Cardinals and DeAndre Hopkins, which will give the Eagles some respectability in the secondary, but the weapons Dalton has to work with exceed the talent of the defense trying to stop them.

The Eagles offensive line has allowed an NFL worst 59 sacks through 14 games, and they were up to their old tricks in last week's loss to the Cardinals, allowing the agile and speedy Hurts to be pulled down six times. With veterans Lane Johnson, Brandon Brooks and Jason Peters sidelined — plus youngsters Andre Dillard and Jack Driscoll — the Eagles offensive line has started a remarkable 13 different line ups in 14 games, an NFL record.

DeMarcus Lawrence looms large on the outside and keeping him away from Hurts could be a struggle for the Eagles offense. It will be interesting to see if Hurts makes more quick passes to try and alleviate the struggle the offensive line might have in this one. Hurts will be able to extend several plays but not all of them.