Report: Barry Trotz to interview with Flyers on Friday

And he's the team's top choice for its next head coach 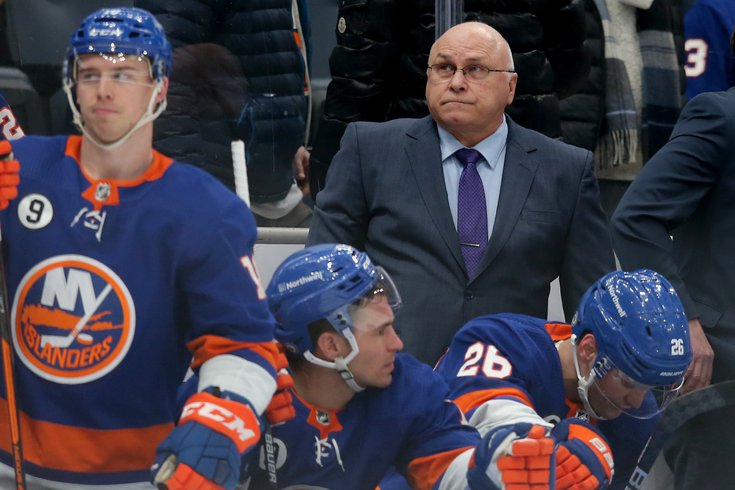 Barry Trotz was fired by the New York Islanders as their head coach on Monday.

Barry Trotz will interview with the Flyers on Friday, per a report from Crossing Broad.

He is the team's top choice to be its next head coach in a search that's critical to its immediate future.

Trotz, 59, was fired by the Islanders early last week in a move that caught most of the hockey world off guard.

The Isles had a down season, missing the playoffs in a schedule marred by injuries, COVID-19-related reschedulings, and an entire first month on the road because of construction delays to their new arena.

Many figured Trotz would have a lot more leeway after taking the club to back-to-back conference finals in 2020 and 2021, but Islanders president and general manager Lou Lamoriello said the team needed a new voice.

Trotz has coached 15 seasons in Nashville, four in Washington — winning the franchise's first Stanley Cup in 2018 — and the past four in Long Island. He's respected across the league for getting the most out of every roster he's given, making his teams, at minimum, a massive pain to play against.

For the Flyers, who have seen him firsthand from having him in the division with the Capitals and then the Islanders, Trotz would be right up their alley.

That is if they can land him.

In Elliotte Friedman's 32 Thoughts column for Sportsnet on Tuesday, he wrote that Trotz is a top candidate for the Flyers but that there's competition from Winnipeg, who interviewed Trotz on Tuesday (he's a Manitoba native), and interest drawing from Vegas, who fired Pete DeBoer after they missed the playoffs.

A return to Nashville could be in the mix too if Trotz rather go straight into management, and Friedman noted that if Trotz does take another coaching job, it could include a transition into the front office later on.

The Flyers do seem prepared to throw the kitchen sink at Trotz for their interview on Friday. They still owe money on Alain Vigneault's contract, but that won't be a deterrent.

Following up on @FriedgeHNIC's 32 Thoughts, can confirm per a source that Barry Trotz is indeed in the "top tier" of the Flyers' coaching wishlist. As I've reported previously, money will not be an object in their coaching search. Doesn't mean they'll get him, but he's a target.

Chuck Fletcher and co. were early into the coaching search when Trotz was fired, which likely created a massive change in the plans.

Other names thrown around as potential coaching candidates have been John Tortorella, Rick Tocchet, Jim Montgomery and Paul Maurice.