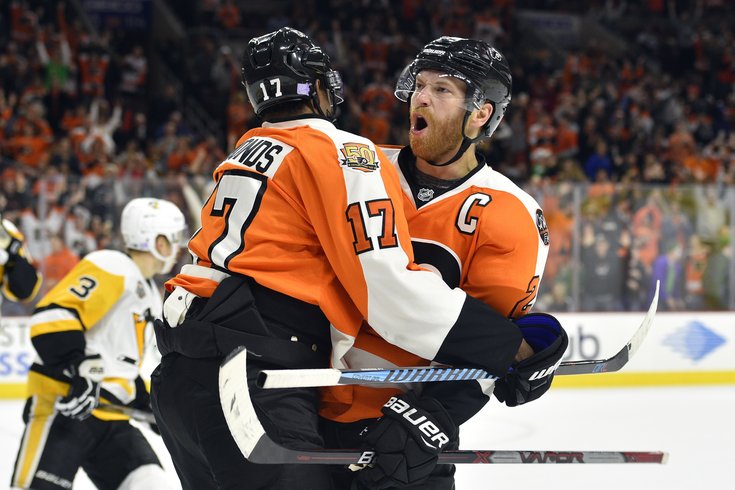 Heading in to play against the Pittsburgh Penguins on Saturday night, things weren’t going great for the Philadelphia Flyers, who were coming off their second loss of the season to the lowly Coyotes and were playing their cross-state rivals in the first game of a back-to-back.

They hadn’t gotten off to the start they many hoped entering their second season under head coach Dave Hakstol. Struggling out of the gate in his first season was understandable. But in his second, especially with the vast majority of players returning? Less than ideal.

And when looking to cast blame, one player’s numbers — or lack thereof — were jumping off the stat sheet.

As the captain, much is expected from Claude Giroux. Sometimes, it’s warranted. Often, however, it’s too much. Don’t believe me that there’s unrealistic expectations put on the 28-year-old center? You don’t have to look far into the past. In fact, you don’t even have to look into the past at all.

Through the first eight games, Giroux hadn’t found the back of the net despite logging more ice time than any other Flyers forward. It wasn’t for a lack of effort -- or opportunities.

Against the Penguins, that changed.

Giroux scored his first goal of the season seven minutes into the second period. And even though the Flyers ultimately lost the game, it was nice to see him get the proverbial monkey off his back — as well as those who were critical of the goose egg in his scoring column over the first two weeks of the team’s 2016-17 campaign.

What’s going unnoticed — likely due to a combination of the Flyers’ 3-5-1 record, their defensive struggles, and his lack of scoring — is that Giroux is actually having one of the best starts to a season in his career, at least statistically speaking.

He now has 10 points through his first nine games of the season. He’s also currently riding an eight-game point streak thanks to his goal in the 5-4 loss to Pittsburgh — his only pointless night was in the team’s season-opening win over the Kings.

More importantly, however — and this is the main point being lost on those who have ripped him for his lack of goal-scoring this season — Giroux has an NHL-leading nine assists, two clear of a large group at seven. He is also tied for second in points, along with linemate Jake Voracek, who scored a pair of goals on Saturday night.

And while goals get the glory, assists are often just as important. Either way, both result adding one to your team's total score. They're inseparable. Every assist on your stat sheet means the same thing as a goal to your team at large.

If both are of equal importance -- after all, there's a reason they're both worth one point -- then why does it seem like so many people are down on Giroux? Not only is he among the league leaders in points, which is nothing more than the total number of goals on which a player has contributed, but he's only once in his career notched more than 10 points in his first nine games.

In 2013, arguably the worst start to a season Giroux has had, it took until game No. 16 for him to find the back of the net. All he did that season was finish third in the NHL with 86 points (28 goals, 58 assists),

This year, he only had to wait until the ninth game of the season to score his first goal.

CLAUDE GIROUX SCORED A GOAL. What a play pic.twitter.com/IetqeomqrY

Coincidence or not, this came on the heels of some shuffling on the Flyers top two lines. Against the Coyotes on Thursday night, Hakstol opted to go with rookie Travis Konecny and Voracek on the top line in place of Brayden Schenn and Wayne Simmonds, who played alongside Sean Couturier.

On Saturday, it was back to Schenn-Giroux-Simmonds and Konecny-Couturier-Voracek. And even though they wound up on the wrong side of the scoreboard, the production was there, with each line producing a pair of goals (Voracek x2, Simmonds, Giroux). The Flyers also outshot the Penguins, 42-27, in the game, looking like a completely different team than the one that fell to the lowly Coyotes (by the same 5-4 score) two night earlier.

But because this is the latest loss in what has proven to be yet another slow start for the Flyers, it’s easy to lose sight of the fact that they’re second in the league with 31 goals scored, and Giroux has been involved in 10 of them. They're also tied for fourth in the league with an average of 3.44 goals per game.

Offense -- especially the top six forwards, and definitely Giroux -- is clearly not their problem, at least so far. That likely has more to do with their NHL-worst 35 goals allowed and 29th-ranked GAA (3.89). The Flyers have allowed at least three goals in eight straight games.

At what point does it cease to matter how many goals Giroux has scored?

When you're allowing close to four goals per game, as the Flyers proved in their last two games, you probably aren't winning a whole bunch of games. No matter how many times your captain scores.