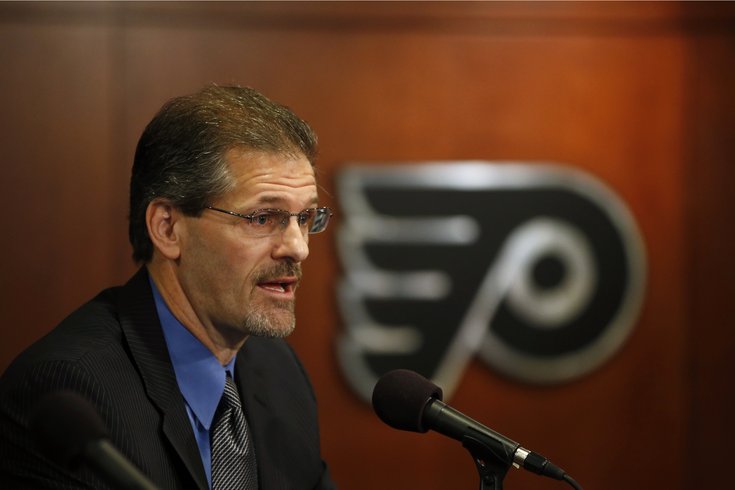 On Friday night, shortly after the Flyers dealt veteran defenseman Kimmo Timonen to the Chicago Blackhawks in exchange for a 2015 second-round pick and a conditional 2016 pick, general manager Ron Hextall held a conference  call with the media to discuss the trade and it's implications on their plans for the trade deadline, which is 3 p.m. on Monday.

Here's a full transcript of the Hextall's call:

On the conditional pick

Ron Hextall: It’s a fourth-round pick.  If Chicago wins the first two rounds of the playoffs it moves to a third… if they win the third round it moves to a second, and Kimmo’s got to play in half of the games.

Did you think you’d be able to get a return like this considering he hasn’t played a game in 10 months?

Hextall: Yeah, I did.  There’s a few things working in your favor.  First of all his cap number is friendly, so you have a team adding certainly a top four defenseman, maybe a top-two defenseman, at a cap number that is reasonable, so there’s value there.  Not only are you getting a player, but you’re getting a damn good person too.  A guy who’s going to work hard every day.  He’s a consummate professional.   He’s going to have a good influence on Chicago.  Players like this don’t fall off trees.  I understand he hasn’t played, but on the flip side of him not playing, he’s a rested hockey player and he’s probably in the best shape of his life.

Would you have made this trade if the Flyers had won the last two games on this road trip and were tied for a playoff spot right now?

Hextall: Yes.  There’s two sides to it.  There’s the future, there’s now.  The defensemen we have have been playing well.  When you can get this type of return and put Kimmo in a spot where he’s on one of the top couple teams in the league, this worked for both sides.

Does this preclude you from making any other trades?

How much insurance or investigation did the Blackhawks want with Kimmo’s medical condition?

Hextall: Well, [Blackhawks general manager Stan Bowman] and I have been talking about this for weeks, not days.  This is something that he reached out to me early when Kimmo started to skate and we started to talk.

I explained within my knowledge what I knew about the situation.  We did our due diligence here.  Stan probably felt like we did our due diligence, but he did his too and their doctors got to our doctors.  They went through a lot of stuff here to make sure they were comfortable with it and they were, as we were.  We would have had no problem playing him with our team.

Was this the plan all along?

Hextall: I’ll tell you how it all started.  Kimmo and I had a lot of talks just before he started skating.  For about two weeks we were meeting a lot. So every day he’d come in for an update, or most days we’d talk about where he was at, how he felt, the doctor’s appointments or whatever else was going on.

Part of the talks got to the point where OK, if we’re out of the playoffs… I asked Kimmo if he wanted to look at going somewhere and taking a run at winning a Stanley Cup.  That point is when we both started thinking about the idea.  Before that I don’t think he’d thought about it, and I hadn’t thought about it.  I’m guessing here but I want to say we were 10 points out of a playoff spot and it wasn’t looking good, albeit never say never.

So we started discussing it at that point, and I think that’s when both of us over the course of time got comfortable with it.  Kimmo did not have a no-trade clause in his contract, but if Kimmo wouldn’t have been amicable to being traded, we would not have traded him.  He’s meant too much to this organization to trade him if it was against his wishes.

Over the course of time we both got comfortable with the idea, and then we’re sitting here now, we’re close to a playoff spot, so Kimmo and I went back and forth – do you want to go, do you not want to go, do we want to move you…  it was a tough one.

In the end, I guess when we talked we both came to the agreement that this is going to work for both sides.  It gives him a chance to win the ultimate prize… and that’s not to say we don’t have a chance here, if you get in the playoffs you have a chance.  But I think the security of Chicago being in the playoffs versus us being out of the playoffs at this point is probably the thing that I’m guessing pushed Kimmo over the edge.

Were there any other teams involved?

Hextall: I had calls from other teams, and whenever I’d get a call I would talk to Kimmo about it.  He knows everything that happened through this whole process, and again I wasn’t going to move him to a team he didn’t want to go to, nor would I have moved him if he didn’t want to be moved.

Did [Patrick Kane’s] injury enter into this at all?

Hextall: No.  Stan and I came to the agreement last night just before our game.  I want to say it was about 6:30.  We just had to work through a few things between then and now.  But that wasn’t a factor.  We were talking about it before that.

Hextall: Well, you’re talking about a special player here, don’t forget.  I know Kimmo’s 39 years old, but this is a special player.  If he goes in there and plays the way he’s capable of playing, he’s going to give Chicago a big boost.

In the end they may have underpaid by a long shot for this deal.  There’s some risk obviously on their side; he hasn’t played all year.  But there’s so much upside as well.  If Kimmo had played all year and we’d have moved him right now, this wouldn’t have been the return.  I believe it would have been far greater than this.

It’s a fair deal for both sides and it got Kimmo to a situation that he’s comfortable with.

Do you worry about what the guys in the room think about this?  That it makes guys think you’re sellers and you’re not staying as is for the last 20 games?

Hextall: I don’t necessarily believe that.  You’ve got to remember, Kimmo hasn’t played for us all year.  I think we’re 62 games deep here, and we haven’t had him play a game.  I don’t look at this like we’ve taken away from our team.  [Our current team] has done a great job in the last month, and we’ve got to keep moving here.

We’ve got a lot of ground to catch and fighting the three teams right now, so we’ve got to get going.  Focus shouldn’t be the fact that we’re looking at the future, because we’re four points out right now and we’ve got to win hockey games.

How much did his performance bonuses affect any of this?

Hextall: To be honest, that wasn’t a huge concern for us.  Obviously it’s a small piece of it, but it wasn’t a huge concern.  I don’t’ believe we’re going to have a cap problem next year.  Obviously we’ve got Chris Pronger on LTI there and we’re not in a great cap situation, but we’d find a way to make that work.  It wasn’t like OK we’ve got to get rid of this because of the $750,000 that would go onto next year.  That wasn’t the case.

Are you actively looking to make any other deals?

Hextall: There’s some things we have to flush out here.  There’s a couple more games here, obviously one for us and for the other teams, so we’ll see where we’re at then, we’ll see what’s happening, and about our health after tomorrow night.  I don’t have the answer for you.  I might not give it to you anyway if I had it for you, but I don’t have it for you.

How have the last two weeks impacted your trade talks?

Hextall: Well, people call back and they ask what you’re looking to do.  Obviously we’re creeping up and getting close here, but there’s a certain price where you’ll take a look at different things.  This is an active time of the year.  It’s a time of year where you have to listen and you have to assess anything that’s kind of thrown your way, and look at today and look at tomorrow and make hard decisions.  It’s an intense time of year for us.