Hart left practice early on Tuesday after suffering the injury 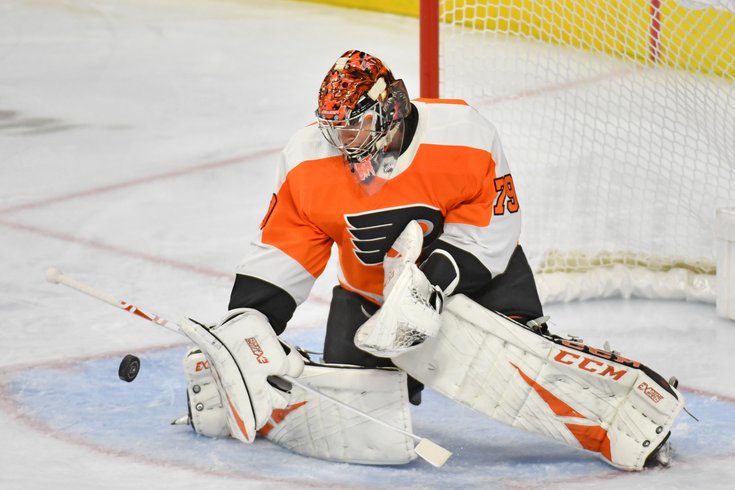 Carter Hart could miss as few as four to six games due to the NHL's upcoming bye week and All-Star break.

Philadelphia Flyers’ goalie Carter Hart will miss the next 2-3 weeks with a right lower abdominal strain after leaving Tuesday’s practice early with the injury, the team announced on Wednesday. In a corresponding move, the Flyers recalled goaltender Alex Lyon from their AHL affiliate, the Lehigh Valley Phantoms.

Like the Flyers, Hart has played his best hockey this year on his home ice at the Wells Fargo Center. He has the most home wins of any Eastern Conference netminder and the second-most home wins of any NHL goaltender with a 13-2-2 record, helping Philadelphia solidify itself as one of the more dominant home teams in the league this season. Hart leads all goalies with at least five starts in save percentage (.940) and GAA (1.68) at home.

The good news for the Flyers is that Hart might only miss four to six games because of the NHL’s upcoming bye week and All-Star break. However, it will not be the easiest of schedules for the Flyers in the meantime.

After facing the defending Stanley Cup champion St. Louis Blues, who happen to be first in the Western Conference this year, the Flyers should win against both the Montreal Canadiens and Los Angeles Kings at home.

The Flyers have struggled of late and are 3-5-1 in their last nine games, but if the season were to end today, Philadelphia would have the eighth and final spot in the East playoff picture.

While Hart is out, Brian Elliott will be the Flyers’ primary netminder. Elliott is struggling right now, as he currently has a .843 save percentage in his last seven appearances. He’s 9-5-3 on the season with a 3.16 GAA and .894 save percentage.

This is the 27-year-old Lyon’s first recall to the Flyers this year after appearing in 13 games for the Flyers over the last two seasons. He has a 4-3-1 record with a 3.05 GAA and .894 save percentage.

“I’ve gotten a lot better at staying ready for an opportunity,” Lyon said to The Inquirer. “I feel like I’ve been on top of my game for most of the year.”