Getting back on the rails: Storylines to watch for the 2022-23 Flyers 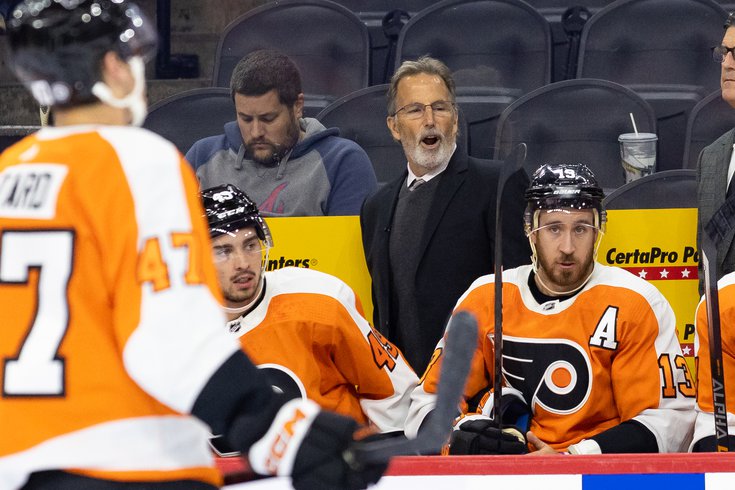 Flyers coach John Tortorella behind the bench during the home preseason game against the Islanders on October 4.

The new NHL season has finally arrived and with it maybe the most enigmatic year in Philadelphia Flyers history.

Claude Giroux is gone and an era of Flyers hockey closed on an embarrassing, frustrating, and in the end, apathetic whimper.

John Tortorella has been brought in to help usher in the next one, working with the banged-up, beat-down, and cap-strapped group that remained.

Once a franchise that was a playoff regular, always looking for that one final push to get to the Stanley Cup, the Flyers are now a team in limbo, with the way forward not entirely clear.

But they're going to try and find it nonetheless.

When training camp opened a few weeks ago, Tortorella stressed that his mission – through discipline, structure, and accountability – was to get the club "back on the rails."

If that's going to happen, these are the storylines that will be key to it.

By the end of last season, the Flyers had completely bottomed out. It was a run of multiple losing streaks, including the franchise's worst ever, and some of the sloppiest and lethargic hockey you could watch.

During the players' exit interviews, many of them, Cam Atkinson especially, talked about a need for better structure and an aspiration to be tougher to play against.

Atkinson specifically called back to his time in Columbus with Tortorella behind the bench as reference.

"I think going into next year, we need to find a way to have some more grit, some more jam, more ‘F you' to our game, on both sides of the puck, in our crease, defending our goalie and in their crease," Atkinson said at the time. "I thought we were a pretty soft team this year in my opinion."

Columbus was in need of a shift too when they brought Tortorella in as the coach several games into the 2015-16 season, and over time, steadily developed into a playoff team that didn't necessarily have the high-end star power, but had a relentless defensive system and a roster fully committed to it to be able to grind things out.

Those Blue Jackets teams became respectable and ended up earning one of the greatest playoff upsets in league history.

The hope now in Philadelphia is that Tortorella can come in and do the same here.

A matter of health 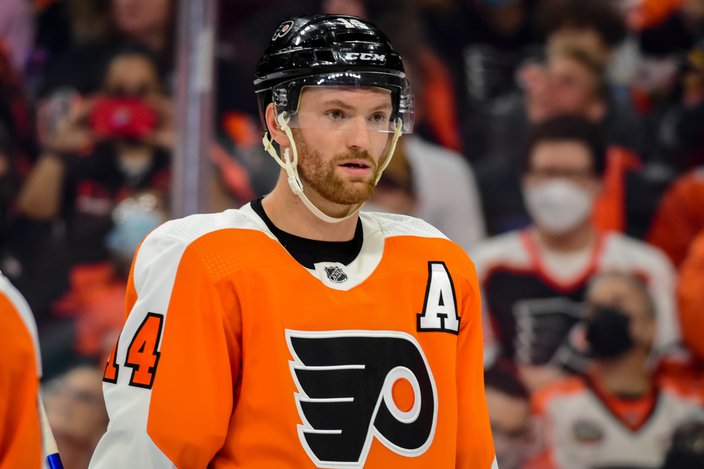 It wasn't the sole reason the Flyers fell apart last season, but it certainly didn't help either. Injuries plagued the Flyers and the bug followed them well into the offseason.

Joel Farabee felt a pinch in his neck working out at the beginning of the summer and needed disc replacement surgery in his neck (though he might be ready to play opening night), Bobby Brink tore a hip labrum and is out for months, Ryan Ellis is in danger of his career being over, and Sean Couturier after getting shut down last season with back surgery, re-injured his back at the start of camp and is week-to-week.

Atkinson will also miss the opener now with an upper-body injury that has kept him out of practice since the preseason wrapped up and is considered day-to-day.

Really, Kevin Hayes, after dealing with a nagging groin injury for much of last season, is the only player hurt from last season who came back into camp fully healthy and left it entirely unscathed.

Depth-wise, this roster is already pretty thin as is, so the Flyers really can't afford to get any further behind the eight-ball here and lose players for long stretches of time.

A matter of Hart 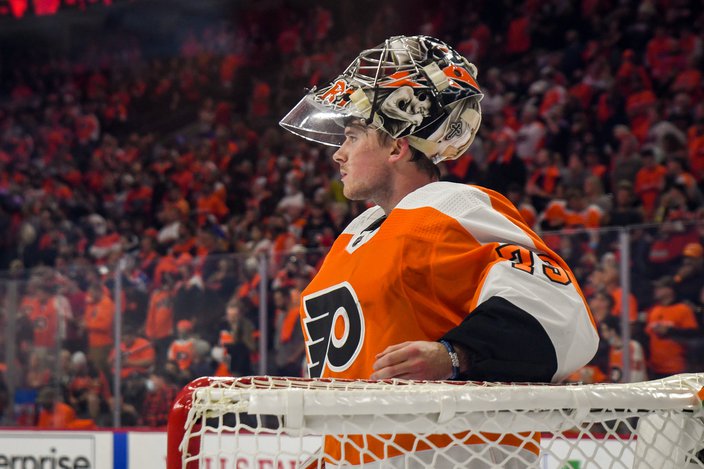 Look, goaltender can be a complicated position to talk about and is often the last position to fully develop. When everything in front of the goalie is going bad, they're not gonna look too good either. Yet at the same time, there have been plenty of examples of netminders standing on their heads and dragging okay at best teams a long way (think Carey Price and the 2021 Habs in the Stanley Cup).

Where does Carter Hart fall?

While he was coming up through the pipeline, he was considered the Flyers' savior in goal for a franchise that just couldn't figure the position out no matter what it did.

And when he finally arrived then got to the 2019-2020 season, he looked very much like he was going to be that guy.

But then came a very down 2021, and last year, when he showed flashes of brilliance in a lost season but still walked away with an underwhelming .905 save percentage.

Hart's still just 24 years old and can still very much be the long-term solution in goal, but he has to get back to the much more consistent form he had pre-pandemic in order to do so.

As a very serious side note, since there is no easy way to transition into this, we do have to acknowledge the uncomfortable cloud hanging over Hart as well.

In 2018, there was a sexual assault involving unidentified members of the Canadian World Juniors team, a team that Hart was the goaltender for. Hockey Canada settled with the victim out of court, but news of the settlement led to a large wave of public criticism toward the governing body's handling of the situation, which in turn led to the NHL opening an investigation into the matter. Hockey Canada and the London, Ontario Police also reopened their investigations of the case.

Hart was quiet for months, but when camp opened, said that he was fully cooperating with the NHL's investigation. When asked if his cooperation extended to Hockey Canada and the London Police as well, he wouldn't say.

All three investigations are still ongoing, and on Tuesday, Hockey Canada's CEO Scott Smith and its entire board of directors resigned. 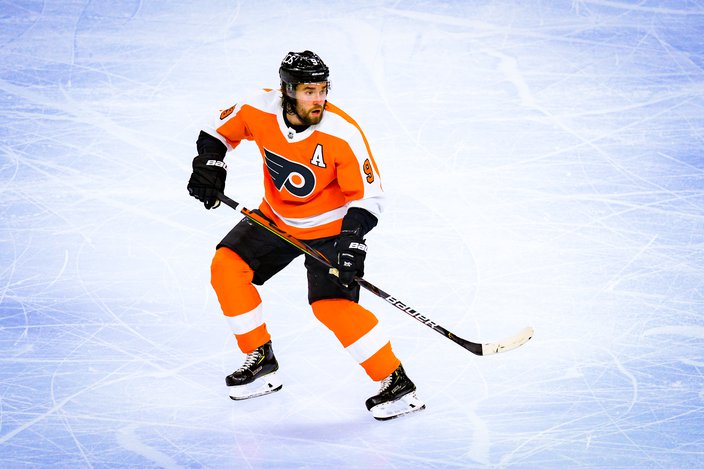 If a player in question wasn't hurt last season, then they likely underperformed.

There are a lot of names looking for bounce-back years, but two to keep an eye on in particular are Ivan Provorov and Travis Konecny.

Both were drafted in the first round of 2015, Provorov was projected to be a future cornerstone defenseman and Konecny a fiery, but highly-skilled winger in the mold of Boston's Brad Marchand.

Neither of them really looked like that last season.

Provorov, who was supposed to have Ellis as his partner on the top pairing, routinely ate up big minutes, but often looked as if he was playing on an island. He held on to the puck for too long, grew prone to careless turnovers with it, and got caught out of position trying to do way too much himself.

Frustration mounted, you could sense it during his exit interview at the end of last season, and trade rumors sporadically began popping up.

To his credit, he did start to clean things up in the last handful of games, and general manager Chuck Fletcher made sure to emphasize his importance to the team on a few occasions.

He's in a bit of a strange spot, and how he holds up with his new partner in the newly acquired Tony DeAngelo will be a big factor in figuring out what exactly the Flyers' defensive corps is going forward.

Konecny's in a weird spot too. He was the team leader in points by the end of last season, but his goal-scoring had fallen off.

Underlying metrics point to that being an anomaly, however, and the front office has hinted that they want to start looking to him to take on a bigger leadership role. With no true scorer on the roster right now, he could step up leading by example with a rediscovered touch. 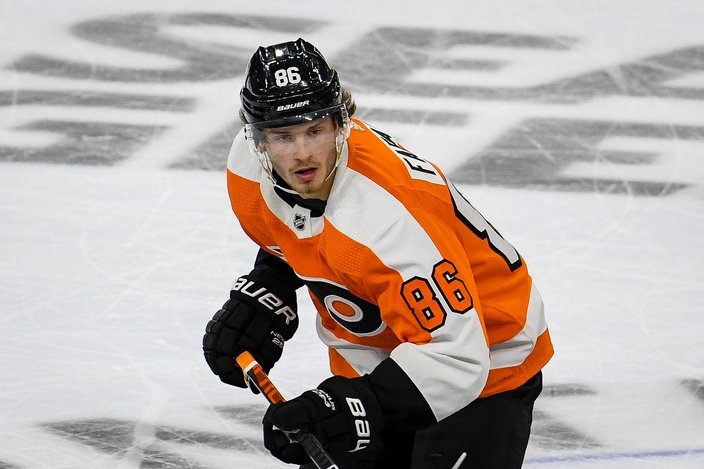 Speaking of stepping up, if there's any time for the prospects and younger players to really start making a name for themselves, it's now.

When camp opened, Fletcher said this was a real opportunity to earn jobs, with the chance for possibly 10 or more players 25 or younger to earn a spot on the roster. Heading into opening night on Thursday, there are 11.

Joel Farabee is 22 and likely has the best shot at becoming the Flyers' next star.

Morgan Frost has a one-year deal to finally realize the offensive potential he was drafted for in 2017. Owen Tippett, the key return in the Giroux trade with Florida, is also looking to finally find a steady spot in the NHL with help from a change of scenery. Wade Allison, after being stopped short of cracking the roster the past couple years because of injuries, has stayed healthy, and Egor Zamula showed promise on the back end late last season.

At the same time, 2019 first-rounder Cam York and 2020 first-rounder Tyson Foerster are a step away down with the Phantoms, and 2022's fifth-overall pick Cutter Gauthier is expected to join the team after a freshman season at Boston College.

The outlook of the team could change quickly if certain young guys can take the reins.

An eye on Bedard?

Look, it's no secret that we're all going to be looking at the standings for draft pick positioning.

All I'm going to say in that regard is consensus top pick Connor Bedard showed some real Flyers energy the other night.

Connor Bedard lays a nice reverse check and then yells “get shit on boy” at the defender 😂 pic.twitter.com/VG79vPTWU1

— Hockey Players With Animals (And Other Chaos) (@animalsofhockey) October 10, 2022