Art and fashion brings Ville Leino back to the Flyers

The former Flyer, through his fashion company Billebeino, worked with the team on a line of contemporary apparel 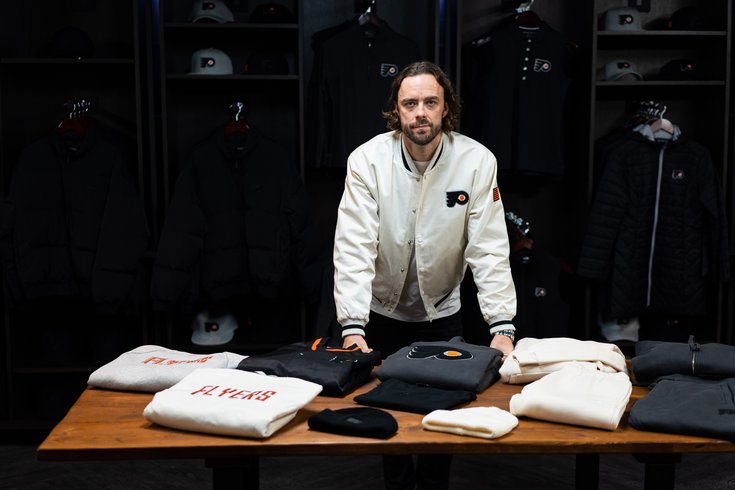 Former Flyer Ville Leino with his apparel collection inside the Cap and Collar store in the Wells Fargo Center's new club level.

During his playing career, he'd spend a ton of time fine-tuning his gear. He'd have to have the exact right stick and the tape on it had to be perfect. Off the ice, he was always buying clothes, constantly looking in stores trying to find ways to change things up and express himself.

He was highly creative, and his Flyers teammates – as that iconic line of Leino, Danny Briere, and Scott Hartnell helped push them all the way to the 2010 Stanley Cup Final – always saw that.

But when he left for the big contract in Buffalo after the 2010-2011 season, things on the ice weren't working out. Production underwhelmed, injuries were piling up, and in search of an outlet, Leino took up painting, which quickly crossed over into his interest in fashion with the establishment of his clothing company Billebeino in 2014.

Now, eight years later, things have come full circle. Leino's company is collaborating with the Flyers on an apparel line, which will be worn by the team on road trips and sold in the Cap and Collar store on the Wells Fargo Center's renovated Club Level.

"It always comes together," Leino said in a phone interview Wednesday. "Later on in my career, I got started with painting and was kind of releasing my expressive side and creativity...After I retired, I could put all my effort into it.

"It's been a fun journey and I feel like I'm still just getting started. It takes a long time to build a brand and to work in design. These are kind of my first years back in the NHL again."

The path back started a couple of years ago with Leino seeking out a potential partnership with the Flyers. Last year, Leino's company designed a set of beanies for players to take on the road and came into this season looking to expand, a process that has produced a set of bomber jackets, puffers, sweatshirts, hats, and womens items. 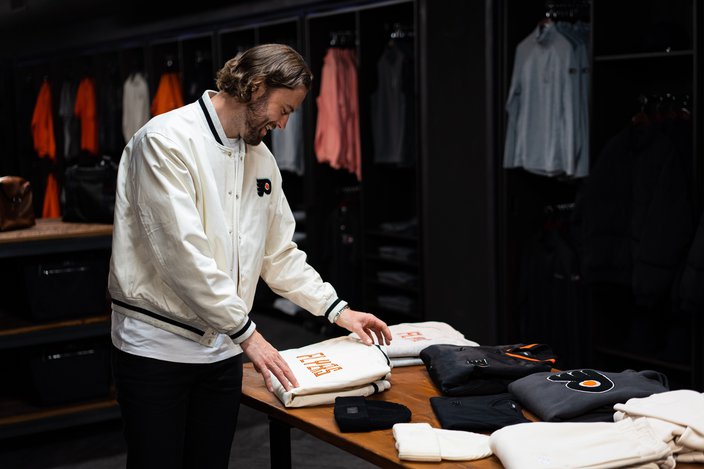 Former Flyer Ville Leino with his apparel collection inside the Cap and Collar store in the Wells Fargo Center's new club level.

The focus in the design, Leino said, was on comfortable, quality materials and a more contemporary look for the Orange and Black compared to what's usually expected of sports apparel.

"I've always loved the orange with the black and white," he said. "The colors are quite helpful, and it's easy to work with the logo. It's unique and simple, it's everything you want from a sports team logo.

"We were focusing on the embroidery, [working] in ur logo, simple on the side, and using very soft materials, good quality materials and trying to make the logos enough to stand out...It's something that a player or a fan I think could wear anywhere...Something I could wear in the bar or a nicer event and I think that was the approach more than the regular fan stuff. That was the approach to it and I think it worked out really nice."

The current Flyers seemed to think so too. A handful of current players – including James van Riemsdyk, who is the last holdover from Leino's run in Philadelphia from the early 2010s – joined in on a photoshoot to help launch the line and will be taking a custom kit that Leino designed on road trips, breaking away from the suits that hockey players have traditionally worn during travel for decades.

"They were super excited," Leino said. "Guys came in after practice, which was super nice, they didn't really have to...It's something different for them too. Everybody's been very welcoming and excited about it the whole offseason." 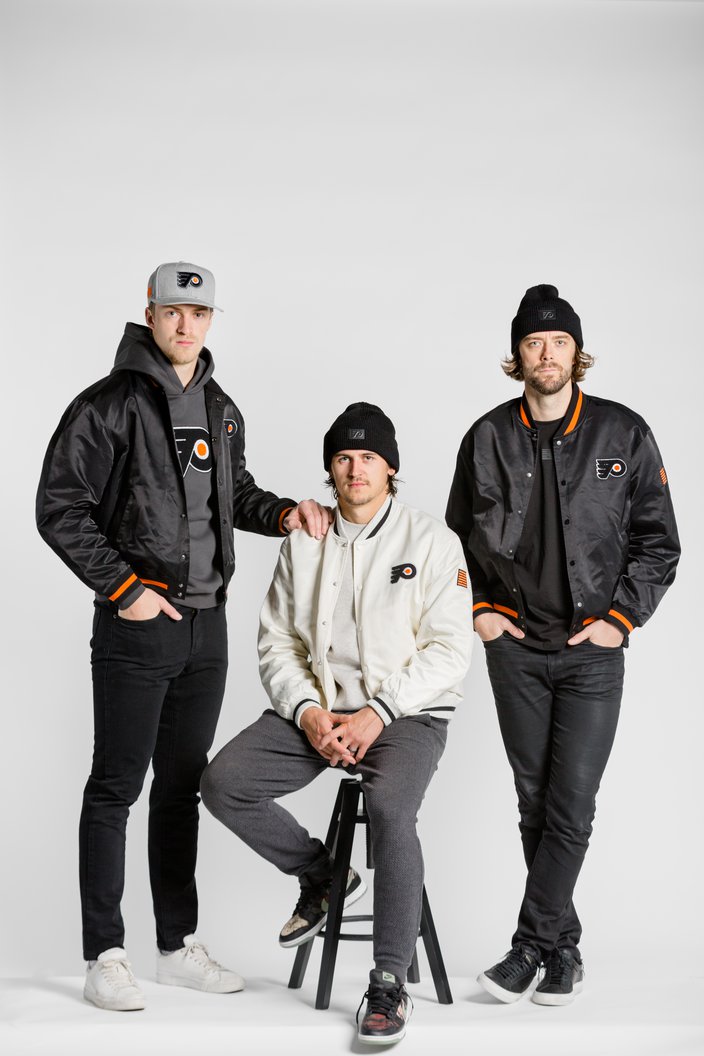 He's excited for fans to start seeing the clothes too because seeing them in pictures is one thing, but seeing them up close is another.

"There are not too many people seeing it live right now," he said. "The photos are the photos but seeing it live is, you can see the quality and how nice it is. So I'm very excited obviously, and the players saying it's nice is one thing you really want to hear."

Art is a deeply personal hobby, and for Leino, what was a creative outlet at first almost naturally led into his post-career endeavor. However, he knew that it would always bring him back to the sport. Just as much as art and fashion are a big part of who he is, so is the game he spent years playing, and the skills he took away from it too.

"Hockey was a big part and the NHL was a big part of my life," he said. "The Flyers were my best times, so all that kind of came together here. There are a lot of things in professional sports, you can accomplish with the business side and brand side. You want to strive for excellence and you want to have a good team and accomplish it with good people.

"There are all kinds of stuff you can take away from the hockey side, from being a professional and being around a team. So I think it was a great learning process looking back too."