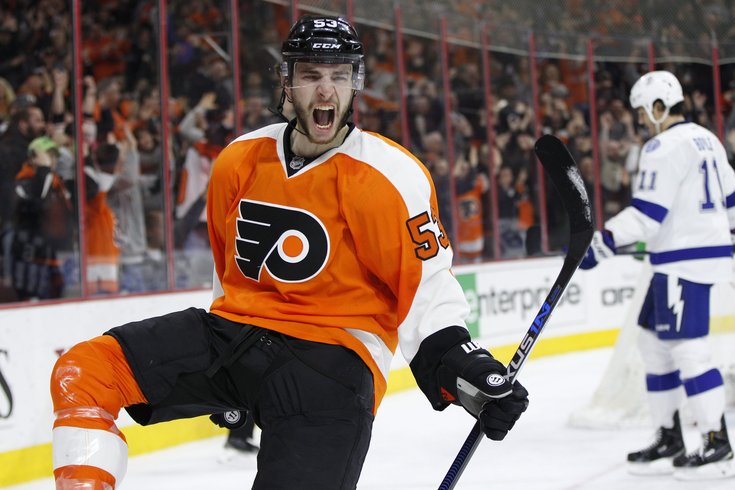 Flyers rookie Shayne Gostisbehere will, deservedly so, be heading to Vegas for the NHL Awards.

There was perhaps no singular day more important to the Philadelphia Flyers during the 2016 season than November 14, when defenseman Shayne Gostisbehere was called up from the Phantoms to replace an injured Mark Streit. A close second would be when Ron Hextall decided to keep him with the big club following Streit's recovery.

That decision paid off to the tune of 46 points (17 goals and 29 assists) in 64 games, including a stretch of 15 consecutive games with at least a point, setting a new record among NHL rookie defenseman. Gostisbehere's 17 goals this season set a new franchise record for rookie blue-liners and he came just three points shy of Behn Wilson's franchise record for points by a rookie D-man.

The 15-game point streak by Gostisbehere was not just the longest by a Flyers defenseman, but also the longest by a rookie of any kind. In fact, only three players in franchise history – Eric Lindros, Bobby Clarke and Brian Propp – have had longer scoring streaks.

And for this, the GhostBear has been been named a finalist for the Calder Memorial Trophy, given to the NHL's top rookie. The other finalists are Artemi Panarin of the Chicago Blackhawks and Connor McDavid of the Edmonton Oilers.

"I’m very humbled," the 23-year-old said on Monday. "It truly is an honor. Having the season I did last year, just to be associated with this award and the moment right now, it’s truly humbling. I didn’t expect to be where I am right now. It’s a compliment to my teammates, the coaching staff, and the front office for believing in me all the way."

I didn’t think I was going to make such an impact the way I did, but I came in wanting to contribute to my team, doing anything I could to help along the way.

If Gostisbehere wins, he'll be the first Flyer ever to win the award. They've previously had two runners-up: Ron Hextall in 1987 (won by Luc Robitaille) and Bill Barber in 1973 (won by Steve Vickers).

"It’d definitely be cool to be the first Flyer [to win the Calder Trophy]," Gostisbehere said. "Anything for the Flyers organization and the fans … it would definitely be pretty cool."

The 78th-overall pick in the 2012 NHL Entry Draft, Gostisbehere already won the team award for best defenseman, the Barry Ashbee Trophy, and became the youngest player in team history to do so.

The numbers clearly prove just how important he was to the Flyers.

"I think that’s the mentality I had from day one," he said when asked when he knew he belonged in the NHL. "I didn’t think I was going to make such an impact the way I did, but I came in wanting to contribute to my team, doing anything I could to help along the way.

"That’s what stuck with me the whole way is just put your individual stuff to the side and keep your teammates always with you, and do whatever you can do to help the team."

And he did just that — a lot of it in ways that won't show up on the stat sheet.

But if you watched the Flyers for any considerable amount of time this season, you know what I'm talking about. Like the time he made a diving catch at the blue line to keep a puck in the zone. Or some of the pass breakups and poke checks he pulled off that left you asking, "Where the hell did he just come from?"

The competition, however, is stiff. Panarin, considered by many to be the favorite, notched 77 points in 80 games for the Blackhawks, including 30 goals (and seven game winners). McDavid, the first-overall pick in last year's draft, posted 48 points (16 goals, 32 assists) in 45 games, including five game-winning goals.

And Gostisbehere is well aware of what he's going up against.

"I don’t really look at it like that," he said when asked who the favorite is. "I think it’s just three tremendous candidates. I think the rookie class speaks for itself. There’s plenty more guys who could have been candidates, but of course Connor McDavid and Artemi Panarin, they’re tremendous, first-class hockey players and they definitely deserve their spots."

The winner will be announced during the 2016 NHL Awards -- which will be hosted by actor Will Arnett -- on June 22 in Las Vegas.