A focus of Eagles defense will be stopping tight ends 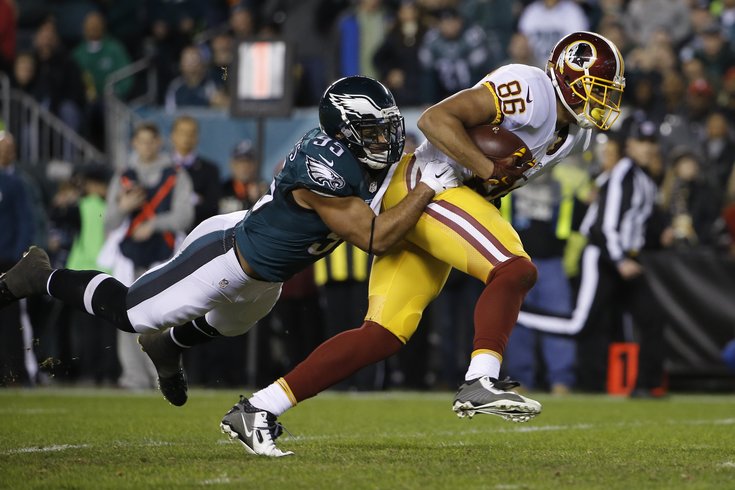 Jordan Reed destroyed the Eagles in the playoff-eliminating loss to the Redskins last season.

During the Chip Kelly era in Philadelphia, the Eagles targeted safeties who had the ability to drop down into the slot and cover receivers man to man. It is why they signed Malcolm Jenkins, a former cornerback, in free agency, and it is what made Walter Thurmond, another former corner, a solution on the back end as well.

While the Eagles have made the switch from a 3-4 defense under Kelly and Billy Davis to a 4-3 under new defensive coordinator Jim Schwartz, it appears the Eagles will still put a high priority on safeties who can cover.

The difference, however, is that Kelly and Davis used to talk about safeties who could cover slot receivers. Schwartz seems to be more geared toward safeties who can stop tight ends.

"The way offense is run now, particularly with multi-dimensional tight ends, you saw the emphasis our team put on those tight ends and some of the contracts that those guys got, you are other using them in a lot of different ways," said Schwartz.

"You're lining them up as wide receivers. You're motioning them and doing all those different things. And if you have a safety that's not comfortable playing out there like a corner, you're going to be in trouble. So it's probably just an eye toward getting ready for those situations. They detach a tight end, put him on the back side. There are a lot of teams that do that. They're a big body. They can throw a fade and do a lot of different things that way. Our safeties have to be comfortable executing that. Both of our safeties and a lot of our safeties, let's put it that way, have corner in the background. That's for a reason."

In his most recent season as a defensive coordinator in Buffalo, Schwartz played in a division that included Patriots tight end Rob Gronkowski. In fact, in 2014, the Bills faced the No. 1, No. 3, No. 6, and No. 7 ranked tight ends in the NFL, in terms of receiving yards.

Schwartz undoubtedly saw on film what kinds of mismatches those types of players can cause for defenses.

In 2015, in the playoff-eliminating loss at home to the Washington Redskins, the Eagles were torched by Redskins tight end Jordan Reed, who went off for nine receptions, 129 yards, and 2 TDs on 11 targets. Both touchdowns came against linebackers. It was clear the Redskins saw a mismatch they could exploit there.

Schwartz also seems to emphasize coverage ability from his linebackers but noted that if they have coverage deficiencies, opposing offenses will exploit them.

"It's very rare you're going to see people line up with two-back, tight end in the core and two wide receivers," Schwartz explained. "Those days are long past. You see that ten snaps a game maybe. A lot of times you're playing three wide receivers, detached tight ends. You better be a multi-dimensional (linebacker). You can line up in space, line up in the box, cover man, play zone. If not you're going to be a target for the offensive coordinator. You're going to be a target for the quarterback."

This offseason, the Eagles added former Schwartz linebacker Nigel Bradham, who is known for his coverage ability, as well as Rodney McLeod, a complete but undersized safety with very good coverage skills.

Schwartz spoke in glowing terms about his new safety tandem of Jenkins and McLeod.

"I'm sort of violating my rule with judging too much into this time of year," he said. "Both of those guys are veteran players and you can see that right away. They're both multi-dimensional. They communicate very well. They can cover a lot of ground. They can blitz, they can play man, they can play zone. I'd be very surprised as the year went on if they're not one of the better safety tandems in the NFL. They've been very impressive so far."

For as much of a leader as he was and for as good as he was in the run game, I'll bet Schwartz had no interest in watching DeMeco Ryans trying to run with those guys.