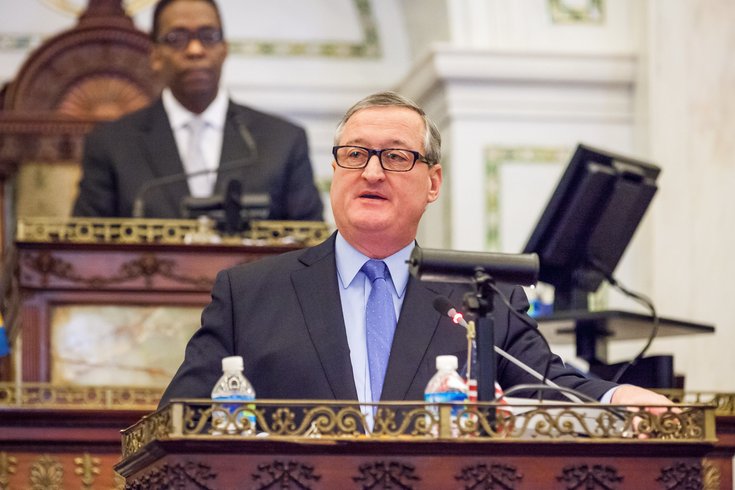 Mayor Jim Kenney is "sickened" that two Syrian families were reportedly denied entry to the United States after their flight landed at Philadelphia International Airport Saturday, he said in a statement.

The two families, who identify as Christian, were reportedly sent to Doha, Qatar by federal officials Saturday following an executive order signed by President Donald Trump.

Trump signed the order Friday that bans Syrians from entering the United States indefinitely and bars the ability for refugees to enter the country for 120 days and immigrants from seven countries – including Iraq, Syria, Iran, Libya, Somalia, Sudan and Yemen – from entering for 90 days.

"I am sickened by reports that federal officials, without knowledge or cooperation of PHL Airport staff, detained and then turned away two Syrian families," Kenney said in the statement released Saturday afternoon. "By several accounts, these families waited months to obtain the proper documentation so they could come to our country legally. And still, they were sent back to a war-torn nation that has used chemical warfare against its own people. The Trump administration very well may have just given these families a death sentence."

Kenney said that the order, carried out by the U.S. Customs and Border Patrol, is "expected to cause several more immigrants to be turned away from PHL in the days to come."

Philadelphia has welcomed about 260 refugees from the seven countries put on the new "ban list" in the last few years, according to the statement.

"Banning immigrants and refugees is not only unjustifiably cruel, it also puts Americans at home and serving abroad at great risk," Kenney said. "By refusing to allow entry to any immigrants from these seven nations, even those who have helped American troops as interpreters and fixers, we are enabling anti-American radicalization and endangering the lives of many."

Sarah Assali, a 25-year-old relative of the six held at the airport, said they had immigrant visas and were approved for green cards, Philly.com reported.

Assali told the news publication that her relatives, from Damascus, were told that their paperwork was invalid but weren't given any further explanation.

A protest is planned from 2- 4 p.m. at PHL's Terminal A Sunday. The event is sponsored by the West Philly Coalition Against Islamaphobia, Jewish Voice for Peace - Philadelphia, Women's March PA and more.

"We will NOT be silent as human beings fleeing war and terror are denied sanctuary," the Facebook's event page reads.

The scheduled protest will join others that have broken out at airports across the United States in response to the ban. Many demonstrators gathered at John F. Kennedy International Airport in New York Saturday.