1 in 6 U.S. residents get foodborne illnesses annually, with about 128,000 hospitalizations and 3,000 deaths

Food recalls have increased significantly during the last six years, according to an analysis conducted by a nonpartisan consumer advocacy group.

Overall, food recalls rose by 10 percent between 2013 and 2018, according to the report. More startlingly, all meat and poultry recalls jumped by 67 percent during that span while the most severe of those – defined as Class 1 recalls – jumped by 83 percent.

The U.S Public Interest Research Group Education Fund outlined these issues – and others – Thursday in a report dubbed "How Safe is Our Food?" The group, which bills itself as an independent consumer watchdog, held several press events across the country, including one at Thomas Jefferson University in Philadelphia. The report came out amid a partial government shutdown that is now 27 days long and has curtailed some federal food inspections.

Food recalls made headlines throughout 2018.

More than 12.1 million pounds of beef and another 164,000 pounds of ground turkey were recalled for salmonella contaminations in 2018. There were multiple recalls of romaine lettuce infected by the E. coli bacteria. And recalls of Ritz and Goldfish crackers also were issued.

"Much of this is preventable through simple and common-sense things that can prevent contamination and help make people's food safe," said Viveth Karthikeyan, a consumer watchdog associate for PIRG.

The report recommends water used for irrigation be tested for hazardous pathogens, pointing to a March 2018 romaine lettuce recall from Yuma, Arizona.

In that case, the U.S. Food and Drug Administration determined an E. coli outbreak most likely originated from infested water. That outbreak sickened more than 200 people and killed five others. 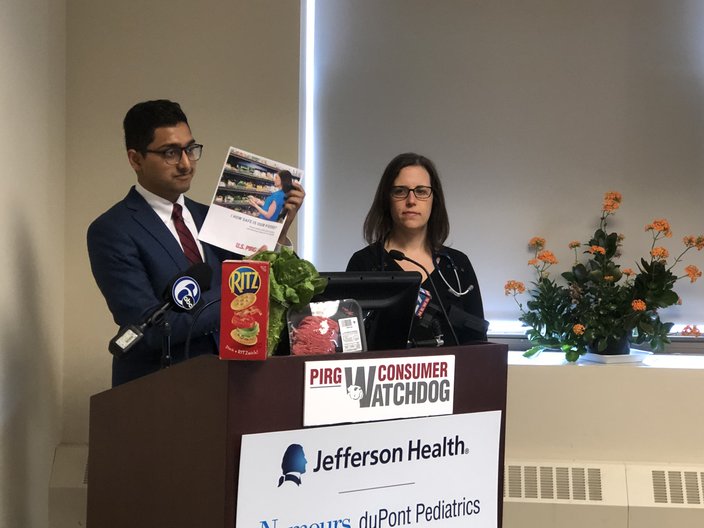 THE 'LAST LINE OF DEFENSE'

"Currently, it's legal for meat to be sold if, in a batch, they discover some salmonella in it," Karthikeyan said. "They can still sell the meat. We're recommending that the (U.S. Department of Agriculture) change that policy."

Other policy recommendations include enforcement consequences for recurring violations of food safety protections, and a requirement that meat processing plants label the most common pathogens as hazards likely to occur and address them in their safety plans.

But the plan also calls for policy changes in the recall process, too. It urges legislators to grant the USDA mandatory recall authority for contaminated food and to penalize companies that continue to sell products after a recall.

Last year, some retail stores failed to pull salmonella-contaminated Kellogg's Honey Smacks cereal from their shelves, according to the report. That prompted the FDA to issue two additional notices.

"Our recall system is the last line of defense in our food system," Karthikeyan said. "Making sure that we can get food off of store shelves and out of people's homes is vital in minimizing the public health impact of contaminated food."

The U.S. Centers for Disease Control and Prevention estimates that 1 in 6 U.S. residents get foodborne illnesses each year. Some 128,000 people are hospitalized and about 3,000 die.

"Most often, food-borne illness causes diarrhea, which can progress to a more severe and life-threatening infection as well," said Dr. Amanda Micucio, a Jefferson Health pediatrician at Nemours Children's Health System. "Although diarrhea may seem harmless, it can cause dehydration. And dehydration can be a big problem for our littlest ones."

Micucio said children younger than 5 have the highest rates of food-borne illness.