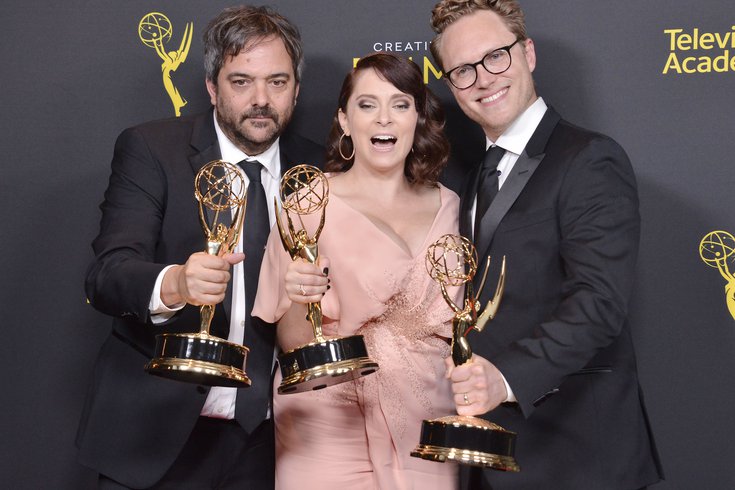 Adam Schlesinger, on the left, died Wednesday morning following complications from the coronavirus. He was 52. He stands next to his 'Crazy Ex-Girlfriend' collaborators, Rachel Bloom and Jack Dolgen, after winning the 2018 Emmy for outstanding original music and lyrics.

Adam Schlesinger, a Grammy-winning songwriter and co-founder of the pop-punk band Fountains of Wayne, has died from complications of the novel coronavirus. He was 52.

Schlesinger, who grew up in New Jersey, died Wednesday morning after a week-long battle with the virus. His death came one day after his family released a statement acknowledging Schlesinger had been hospitalized after testing positive for COVID-19. He was sedated and placed on a ventilator.

At the time of the statement, Schlesinger's condition seemed to be improving. "We are cautiously optimistic," his family said.

From his work with @fountainsofwayn to his award-winning credits in TV, movies, and stage, millions of fans caught that radiation vibe Adam Schlesinger was groovin' on. A sad, sad loss for Jersey's music scene.
https://t.co/7ZYnXdoT2n

Schlesinger, who grew up in Montclair, Essex County, formed Fountains of Wayne with Chris Collingwood in 1995. The band's name was inspired by a lawn-ornament store in Wayne, Passaic County. The band is best known for its 2003 single, "Stacy's Mom." The band was nominated for two Grammys that year, including best new artist and best pop performance.

Schlesinger eventually won a Grammy Award for his work on "A Stephen Colbert Christmas: The Greatest Gift of All!"

In 1997, he was nominated for an Oscar and Golden Globe for writing the theme song for "That Thing You Do!," a film starring Tom Hanks. The actor, who recently battled his own case of the coronavirus, tweeted, "There would be no Playtone without Adam Schlesinger, with his That Thing You Do! He was a One-der."

There would be no Playtone without Adam Schlesinger, without his That Thing You Do! He was a One-der. Lost him to Covid-19. Terribly sad today. Hanx

He also wrote music for several other movies, including "Music and Lyrics," "John Tucker Must Die," and "Josie and the Pussycats."

Schlesinger served as the executive music producer for CW's "Crazy Ex-Girlfriend." He was nominated for 10 Emmys, winning for outstanding music and lyrics in 2018. He composed music for several other television and radio shows, including "Crank Yankers," "Too Late with Adam Corolla," and "The Howard Stern Radio Show."

Schlesinger recently wrote the score for Sarah Silverman's off-Broadway musical, "The Bedwetter." He was also working on the upcoming Broadway musical adaption of the '90s sitcom, "The Nanny," with his "Crazy Ex-Girlfriend" collaborator Rachel Bloom.