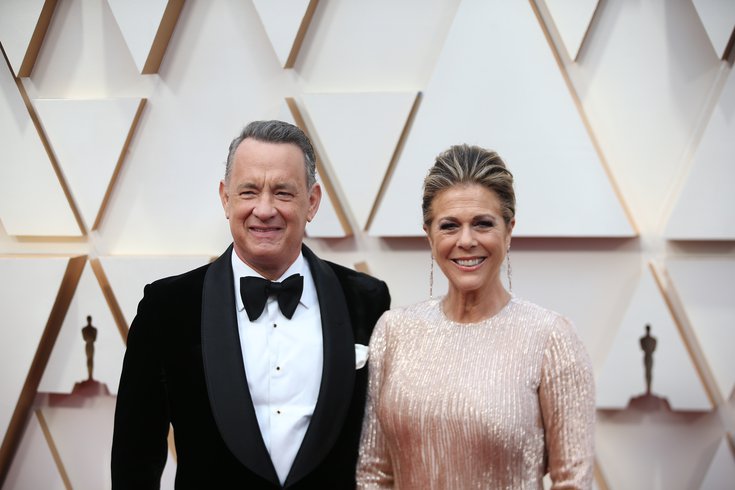 Tom Hanks and Rita Wilson have tested positive for the novel coronavirus, Hanks announced on Wednesday. The beloved couple of 31 years are the first-known celebrities to have the virus. Both are currently undergoing treatment in Australia.

The novel coronavirus had quite the day on Wednesday, from the NBA suspending the season to President Trump suspending travel from Europe.

Despite the never-ending news on the virus — which is now a pandemic, according to the World Health Organization — the real cherry on top was finding out that Tom Hanks and Rita Wilson were both diagnosed with COVID-19.

After suffering from mild cold-like symptoms in Australia, Hanks and Wilson decided to get tested for the virus and both tests came back positive. Despite the diagnosis and self-isolation, Hanks appeared to be relatively upbeat about the whole thing. "Not much more to it than a one-day-at-a-time approach, no?," he said.

While news of the coronavirus has many people in a tizzy, you better believe when the news came to light about the beloved Hollywood couple the internet flipped out.

Some people were just downright apathetic about the coronavirus pandemic ... that is, until it affected everyone's favorite actor.

Everyone gangsta until Tom Hanks gets Coronavirus... #COVID19 pic.twitter.com/l8FAGaU4Qx

News: you should all be worried about coronavirus!
Me: I don’t give a fuck 😑
News: Tom Hanks has coronavirus
Me: pic.twitter.com/GrW9esmF6N

This person has a really good question about the potential movie about this whole scenario.

Ok but if there is eventually a film about Tom Hanks being diagnosed with COVID-19/Coronavirus who will play Tom Hanks because if it were about anyone else, Tom Hanks would play them but because it's actually Tom Hanks, who plays Tom Hanks???

This person who said things they wish they could take back.

References to "Cast Away" were naturally made in light of Hanks' required self-isolation.

14 days in isolation is nothing for #TomHanks pic.twitter.com/L2VNdOhrQN

Also, there was just a lot of sadness when fans heard the news.

out of all men it had to be tom hanks, i hate it here pic.twitter.com/VyFfDDW38G

I will bitch slap you, coronavirus. You ain’t taking #TomHanks. pic.twitter.com/9c5tSp4mlr

me pushing the coronavirus out of tom hanks pic.twitter.com/ZSNvKz5ZPy

Despite the concerns, however, the actor seemed to be in pretty good spirits. Following the news, their son, actor and director Colin Hanks, assured fans that both his parents were doing well and are expected to make a full recovery.

Their youngest son, Chet — who doesn't like to wear shirts — posted a video onInstagram discussing his parents' health. "I just got off the phone with them. They both are fine. They're not even that sick," Chet said. "They're not trippin' but they're going through the necessary health precautions obviously."

Tom Hanks' son Chet gave an update on his parent’s condition after they tested positive for #CoronaVirus.