The fizzy, clear, lightly carbonated alcoholic beverage is back, baby 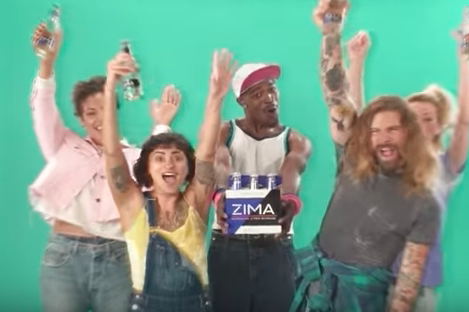 Zima, that clear alcoholic beverage that burst on the scene in the mid-‘90s, played a formative role in the young lives of a great many drinkers of a certain age. Released during the era of Crystal Pepsi, when everything was “going clear,” Zima was marketed as a “unique alcohol beverage,” and alternative to beer.

The brand, owned by Coors, was pushed in commercials, like this one, which is also essentially the entire year of 1994 shortened into 30 seconds:

Zima, which resembled a slightly harder version of Sprite, but contained so little alcohol that it made Smirnoff Ice taste like Jack Daniels, was hugely popular for a very short time, until all of a sudden, it wasn’t.

The story of its fall has been studied by advertising branding experts for years as a cautionary tale of what can happen when a brand suddenly goes from cool to uncool.

Brendan Koerner’s exegesis in Slate back in 2008 is probably the definitive chronicle; the short version is that young women became the primary drinkers of Zima, and men therefore avoided it, even though they had been the original target market. It also didn't help that David Letterman, then in his early days on CBS, was mocking Zima nightly.

Zima stumbled along for another decade, and a couple of retoolings, mostly involving tweaking the alcohol content, failed. Zima was ultimately discontinued in the U.S. in 2008, although the beverage remained popular in the Japanese market pretty much all along.

So, it was quite a shock when the parent company, now MillerCoors, announced early last year that Zima would return, in a limited edition, in the summer of 2017.

"Put on your choker, bust out your portable CD player and dust off the pager,” the press release read, “Because Zima's back.”

Zima returned to a very different world, and a very different beer industry, one with exponentially more options for drinkers. The craft beer phenomenon, after all, was barely in its infancy during Zima’s heyday. Yet, despite all that, the Zima revival made a surprising impact, drawing tons of media coverage and even getting people to drink the stuff again after all these years.

Put on your choker, bust out your portable CD player and dust off the pager,” the press release read, “Because Zima's back.”

In an interview last month with the Milwaukee Business Journal, MillerCoors CEO Gavin Hattersley described the Zima revival as “The most polarizing decision we've made in our senior leadership team.”

But he called the move, which he said he’d pushed for, a success, stating that the company sold out of its entire 39,000-barrel run during the re-release, which ran from July 4 to Labor Day.

Zima was, famously, one of the first food-and-beverage brands to market itself with a website, and in the relaunch, it used tech to its advantage again, not only with a new website that looked straight out of the Netscape era, but with newer-generation social media sharing tools. Last summer, you may have seen friends posting pictures of themselves holding Zima bottles and sharing what ‘90s music they were listening to while drinking it.

The revival, it appears, will continue, as the brand’s verified Facebook page stated in late December that Zima will indeed return in 2018, although it’s unclear when, or for how long. Hattersley had said in last month's interview that the brand was “thinking about” another return, but a Facebook post later confirmed it:

Is Zima going to replace the world’s beer, as it did in that commercial? No, and Hattersley said in the Business Journal interview that Zima will not be released as a “year-round” brand. But, it's unlikely return in 2017 demonstrated that nostalgia appears to know no limits.