From being rapped about by Eminem to having his guts laid out on the operating table, Green is not lacking in material for his stand-up 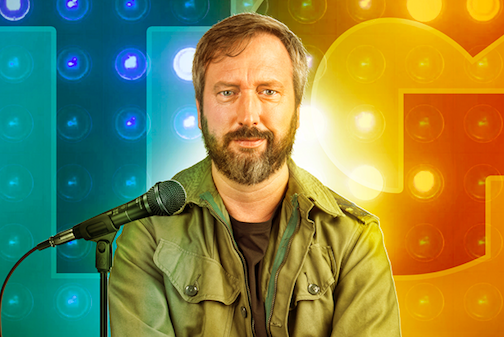 Courtesy of Pulse PR /for PhillyVoice

It doesn't matter that he can't vote – Tom Green says today he is "living the American dream as a Canadian."

Green admits the Land of Liberty has treated him kindly over the past three decades. He credits "The Tom Green Show" with really putting him on the map as a household name.

RELATED READS: Steven Wright remembers happier times as a producer on 'Louie' | Colin Quinn wants you to shut up and enjoy the show | Plastic Cup Boyz diss Philly for having 'only two comedy clubs'

"'The Tom Green Show' on MTV – that was the moment when people knew who I was around the world," he told PhillyVoice during a recent interview previewing five shows at Helium Comedy Club this weekend.

In addition to his success on MTV, Green has appeared in a number of mainstream movies, including "Road Trip," "Charlie's Angels," "Stealing Harvard" and "Freddy Got Fingered," in which he coined the phrase, "Daddy would you like some sausage?"

One momentous occasion Green said he likes to relive from time to time during his stand-up routine was his stint on "Celebrity Apprentice" in 2009.

After spending three weeks filming "Celebrity Apprentice," (now)-President Donald Trump fired Green after he went out drinking with Dennis Rodman on the night Green was tasked with being the team's project manager.

"When I was on the show, for three episodes – about three weeks – I was working with the President. There would be times you're hanging out in the hallway, chatting with Trump. Of course, at the time, nobody knew he was going to be President. He was just Donald Trump from 'The Apprentice,' and it was kind of hilarious," Green said.

"I don't know if he was trying to be hilarious, but the reason I wanted to do the show was because I always thought it was funny to watch him fire people. His bluster was something that was interesting to me at the time."

While Green said he doesn't make a point of talking about politics during his stand-ups shows, he does enjoy reminding his audience how he worked with Trump.

"I'm sort of taking the approach of – I'm Canadian. This is your problem," he quipped.

In early 2000, Green was diagnosed with and treated for testicular cancer. Many remember he wrote, directed and starred in a one-hour MTV segment that documented the surgical procedure of removing his right testicle. The episode received wide critical acclaim, with TIME magazine calling it "one of the top 10 moments in television in the year 2000," said Green. It raised awareness of the reality of the risk of testicular cancer and encouraged thousands of young men to get checked early and often.

"Cancer was a real curveball," he confessed.

"The thing I'm most proud of is that it did save lives. I've had hundreds of people come up to me over the years and many more people…sometimes with tears in their eyes…The whole thing about testicular cancer is if you catch it early, then your survival likelihood is very good. So, I think that that's been quite something I'm proud of and something I'm happy to say had a good impact on people. If you ever feel like something is wrong, don't waste any time. Go to the doctor. Don't be embarrassed. Don't be ashamed to have the doctor check you out in a sensitive area."

Green said everything is now fine with him, health-wise, and he's felt no long-term effects from cancer.

We couldn't let Green go without asking him about his short-lived marriage to Hollywood sweetheart Drew Barrymore. The couple wed in the summer of 2001 and split a mere nine months later, ending their union officially in October 2002.

"I've gotten to the place in my life where I don't really talk about it," he said.

"It was so long ago and really has nothing to do with my life or what I'm doing."

And that was that.

As for what Philadelphians can expect from this weekend's performance at Helium, Green said to prepare for "an absurd, high-energy show."