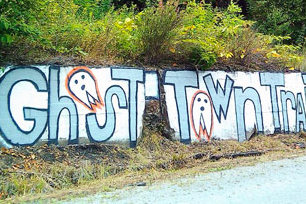 The Ghost Town Trial, a 46-mile stretch in Indiana and Cambria counties, has been designated Pennsylvania's 2020 Trail of the Year.

With more than 12,000 miles of trails across the state, picking Pennsylvania's best is a tall order.

Every year, the state Department of Conservation & Natural Resources selects its Trail of the Year in order to encourage travel and use of Pennsylvania's trails. Two years ago, Fairmount Park's Forbidden Trail was chosen as the 2018 Trail of the Year.

In 2020, the nod goes to the 46-mile Ghost Town Trail that runs along an old rail route between Indiana and Cambria counties in Western Pennsylvania.

“Rich with the history of railroading and former coal mining towns along its 46-mile route, the Ghost Town Trail, like so many rail trails throughout Pennsylvania, captures the spirit of an industrial past and the promise of a recreational future,” DCNR secretary Cindy Adams Dunn said. “And again, we see a rails-to-trails conversion spawning economic benefits with establishment of new businesses and increasing patronage at others. Restaurants, bike shops, clothing retailers and outfitters, hotels, and motels. The list goes on and on.”

The Ghost Town Trail is cooperatively managed by the Cambria County Conservation & Recreation Authority and Indiana County Parks & Trails. Its name comes from the history of small coal-mining communities that developed along the railroad corridor.

The trail formed in bits and pieces, starting in 1994 with a 12-mile segment that expanded until the 32-mile main stem was completed between Blairsville and Ebensburg. It's currently 5.5 miles shy of become the first continuous loop of rail trail in the eastern United States.

Ghost Town Trail was previously designated as a National Recreation Trail in June 2003 and ranked seventh on the “Best Hiking Trails in the United States” list by American Towns Media in 2016.

An estimated 80,000 visitors enjoy the trail each year. Detailed trail maps and information about Ghost Town Trail can be found here.