One teen tried to climb the tree and remove its star, police said 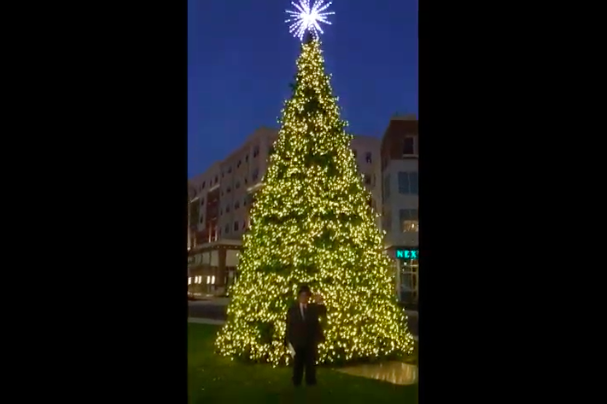 Glassboro Mayor John E. Wallace III filmed a Christmas tree lighting ceremony for the town to view in lieu of a gathering during the coronavirus pandemic. The display was later vandalized by two teenagers, according to police.

Authorities responded to a report of a disturbance at the scene of the display around 2:10 a.m. Witnesses said one man was climbing the Christmas tree in an attempt to remove the star at the top.

Several lights on the tree were removed, while others were no longer illuminated and multiple branches were broken.

When police arrived, one of the suspects dismounted the tree and fled the scene on foot.

Witnesses who were at the park provided their accounts and descriptions of the suspects to police, including a video that Rowan Police were able to use to identify 19-year-old William Fowler, of Demarest.

Further investigation revealed that a large Santa Claus decoration in the park had been knocked over and damaged. Surveillance video from the area helped authorities identify 19-year-old Matthew Lubicky, of Delran, as the person allegedly responsible for sacking Santa.

Fowler and Lubicky also allegedly attempted to rip locked bicycles from a wall mount. Fowler is also accused of kicking the rear bumper of a parked car, causing damage.

The total cost of damages and additional cost of labor to repair the Town Hall decorations is estimated at close to $6,000, police said.

Glassboro's tree lighting ceremony took place without an audience this year as a precaution during the coronavirus pandemic. The event, led by Mayor John Wallace, was uploaded to YouTube for the public to view.