The crash happened at a club in the Poconos. Authorities say the driver was not drunk 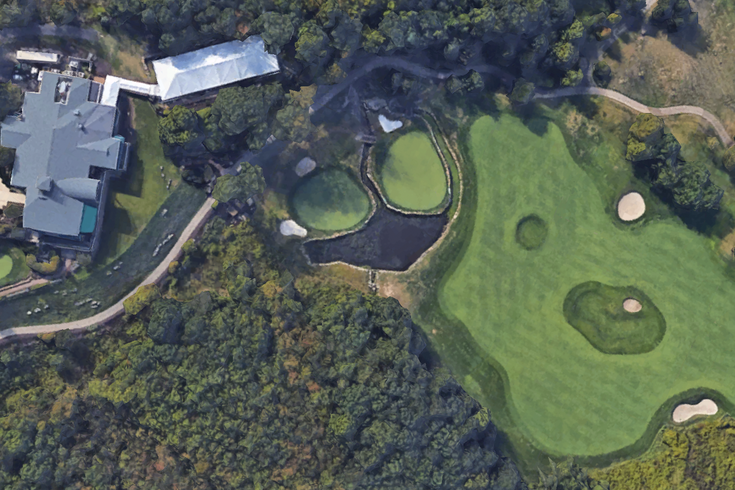 At Glenmaura National Golf Club in Moosic, Pennsylvania, a man drove his car into a creek on the course after an argument with his wife, who had walked away from him. He was sober and didn't cause any damage to the course, so no charges were filed.

In the 2000s, Glenmaura hosted the PGA's Northeast Pennsylvania classic for an eight-year stretch, and the club's banquet venue overlooking the 18th green has become a popular place for couples to tie the knot.

But with any wedding comes the possibility of drama, sometimes aided by alcohol and the self-importance that comes with looking nice. It can lead to regrettable actions that everyone in attendance will remember forever.

Should you happen to be the fool, you'll never live it down — or be invited to the weddings of anyone else there, if they can help it.

A golf enthusiast with the popular Firepit Collective got word this month about an argument between a husband and wife during a recent wedding at Glenmaura National Golf Club, which is in Moosic. It's unclear what the marital strife was about, but at some point, the wife got out of the couple's Chevy sedan and walked onto the golf course.

The intrepid husband decided to follow her — in their car — and wound up getting stuck in the rocks along Covey Swamp Creek near the 17th green.

Any good wedding ends with a car in a creek. According to people I talked w a husband and a wife had an argument at a wedding held at a golf club in PA. The wife got out of the car and walked onto the golf course, and the husband, undeterred,followed in his car. He ended up in pic.twitter.com/FWA9j4PtsK

The creek fronting the 17th green (misjudged the wind). The cops were called and the husband was…SOBER (did not see that coming) there was no damage to the course and no charges were filed
The member who was responsible for the wedding can’t hold an event at the club for 2 yrs

This just goes to show that arguing with a spouse impairs the mind all on its own, no need for alcohol.

Golf Digest dug up a little more information about the incident and learned that police were called to the scene. Since the man was sober and no damage was done to the golf course, there were no charges filed. The car was later hauled out of the creek, but not before the glorious photo of the blunder reached the internet. What would this incident be without a good golf joke?

Although the driver escaped legal consequences and the public humiliation of being identified, the people who held the wedding at the golf club have been banned from having any events there for the next two years.

At least the guy can say he didn't drive into the Atlantic Ocean, but he may need a miracle to repair his marriage.