The 11 people arrested worked at Plainville Farms locations; the alleged abuses – which authorities say includes kicking and throwing the birds – were uncovered by PETA 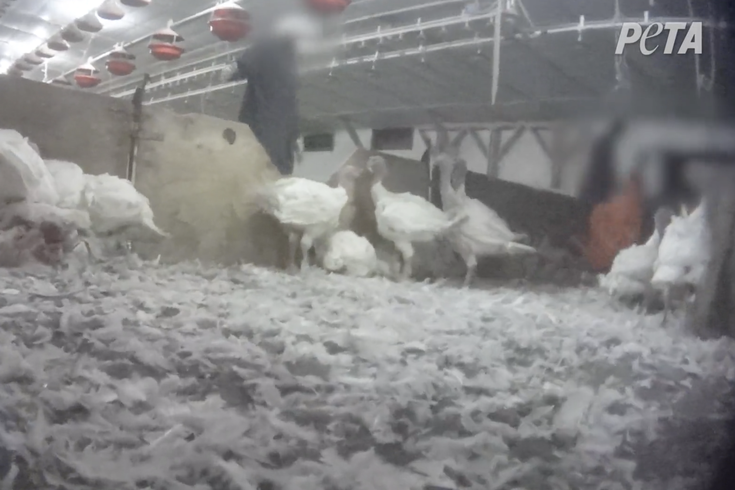 Eleven former farm workers in southeastern and central Pennsylvania have been charged with animal cruelty for allegedly kicking, throwing and stomping on turkeys at farms owned by a regional supplier for grocery stores, Pennsylvania State Police said.

The charges against the former employees of New Oxford-based Plainville Farms come after a lengthy investigation by People for the Ethical Treatment of Animals, which sent an undercover staff member to gather video evidence of inhumane treatment at the company's West Sadsbury and West Fallowfield facilities in August 2021.

During the course of the investigation, authorities learned that the 11 employees were hired as "turkey catchers," who are responsible for loading live turkeys onto trucks and are required to adhere to animal welfare policies.

In one instance, a worker was filmed attempting to break a turkey's neck, but when it didn't die, he left the convulsing bird on the floor of a shed. On other occasions, instead of intervening, a supervisor joined in on the abuse, kicking a turkey and berating the undercover PETA investigator for not doing the same and working too slowly, the animal rights organization said.

“Nothing can take back the suffering that all these helpless and gentle turkeys endured at Plainville Farms, but these charges show other meat companies that cruelty has consequences,” PETA spokesperson Daniel Paden said.

Plainville Farms supplies turkey meat to grocery stores, including Wegman's and other chains. Whole Foods, after learning of PETA's findings, pulled the company's products from its shelves.

"(Global Animal Partnership) does not tolerate, and unequivocally condemns, the cruel treatment of any animal in our program," the organization said.

Plainville Farms said it launched an internal investigation that included the input of an animal welfare expert.

“Plainville remains committed to the highest welfare standards for our animals and customers. We believe that it’s important for incidents like this to come to light in order to challenge our industry to do better,” said Plainville Farms CEO Matt Goodson, who said the company cooperated with the investigation and fired the employees who have been charged.

Three of the people charged — Joseph Nunez Rosario, 41, of York; Christopher McCardle, 37, of Gettysburg; and Mitchell Buckley, 23, of Aspers — previously worked at the Chester County farms where PETA conducted its undercover investigation.

“Animal abuse is inhumane and cruel and will not be tolerated by my office or any law enforcement in Pennsylvania," Chester County District Attorney Deb Ryan said. "We thank the PETA for their advocacy in bringing this information to the attention of PSP’s Bureau of Criminal Investigation."

One more person facing charges was not identified by police.

Goodson said Plainville Farms has hired a third-party vendor to handle turkey catching and will use both stationary cameras and body cameras on workers to ensure that welfare standards are maintained.

PETA said it has submitted a complaint to the Federal Trade Commission alleging that Plainville Farms is engaging in false advertising by making claims on its packaging that turkeys on its suppliers’ farms are “humanely raised” in a “stress-free environment.”