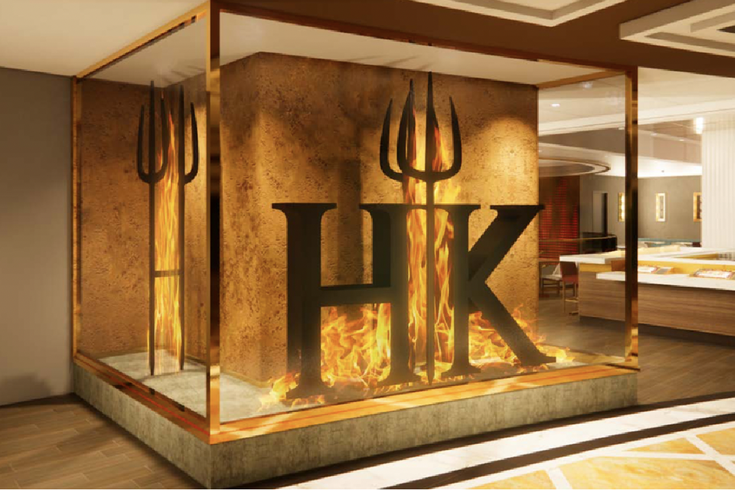 Gordon Ramsay will bring his Hell's Kitchen restaurant to the East Coast with a new location at Caesars Atlantic City in summer 2022.

Famed restaurateur and chef Gordon Ramsay is on track to open his third business in Atlantic City this summer, debuting his Hell's Kitchen concept at the Caesars Atlantic City casino.

The British chef and author is expanding his partnership with Caesars Entertainment in New Jersey, which already includes his Gordon Ramsay Steak at Harrah’s Resort and Gordon Ramsay Pub & Grill at Caesars Atlantic City.

"Atlantic City and visitors throughout the tri-state have been so supportive of Gordon Ramsay Steak and Gordon Ramsay Pub & Grill, so I look forward to having them experience another one of my signature concepts,” Ramsay said.

An open kitchen design will feature red and blue themes surrounding a centerpiece with mosaic tiles that will be visible from every table in the restaurant.

The menu is set to include Ramsay’s classics like Beef Wellington, the Hell's Kitchen Burger and Sticky Toffee Pudding. The bar will serve a selection of classic and signature cocktails, from a traditional Negroni and Old Fashioned to the Smoke on the Boulevard served in a lantern adorned with dry ice.

Set to enter its 21st season on Fox later this year, "Hell's Kitchen" will eventually crown the head chef of the new restaurant in Atlantic City, where a portrait will be hung with other previous champions on the winner's wall.

The new restaurant is taking over a space previously occupied by the Dusk nightclub, Planet Hollywood and a boardwalk beer garden.

Ramsay has 13 restaurants across multiple U.S. cities in addition to 40 international restaurants. He holds seven Michelin stars in his portfolio.

An opening date has not yet been set for Hell's Kitchen at Caesars Atlantic City, but the restaurant is on track to open during the summer.