All The Skies, a new shop and resource hub, marks five years of progress for Gianna DeMedio. She wants others to get there, too 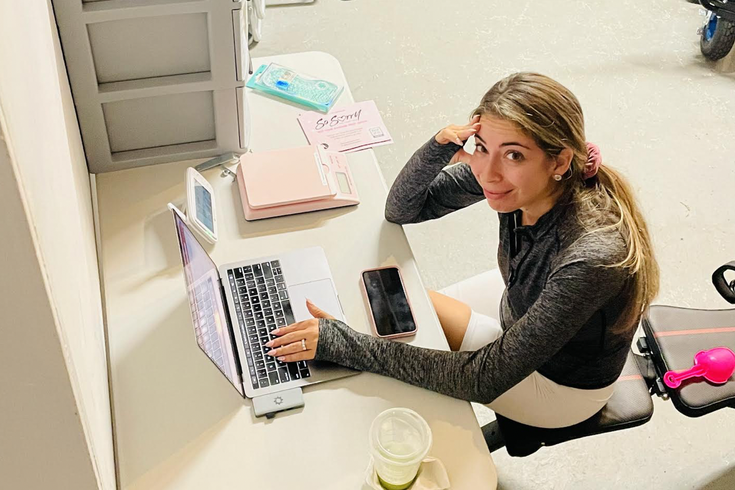 Gianna DeMedio, 32, of Longport, New Jersey, created All the Skies as an online shop and resource for people who are grieving the loss of loved ones.

DeMedio was shattered by her dad's death, which happened just two weeks before Father's Day, but she didn't immediately know the depth of the grief she was facing. She poured her attention and energy into helping the people around her cope with the loss of the lovable Gary DeMedio, who had a big mouth and a taste for cigars. Gianna just wanted to be a rock for her family.

"It's really ridiculous how grief makes you feel like you need to get up and start running right away," said DeMedio, who lives in Longport, Atlantic County. "I was very hard on myself and so worried about everyone else in my family — because they're all grieving, too — and I wanted to put on a brave face to make sure that they were all OK."

It worked until it didn't. DeMedio went home to her apartment one day — she was living in Philly at the time — and was blindsided by a tsunami of emotions. She collapsed to the floor in panic and wound up spending a night at the hospital.

That's when DeMedio, a former public relations officer at Jefferson Health, knew she was faced with a much longer journey to process the loss of her dad.

Initially, DeMedio got a huge boost from the Eagles. To this day, a part of her believes that her dad's rambunctious spirit had something to do with the team's improbable Super Bowl LIV run, which began in the months after Gary's death. It was a moment of catharsis for her in that difficult first year, but she's been doing the long-term work of healing ever since.

Now DeMedio, 32, is ready to share her wisdom and wit with others who are struggling to cope with loss.

This week, DeMedio debuted an online boutique, All The Skies, that will serve as a resource hub and gift shop dedicated to people who are grieving.

"It was something my dad always said to me," DeMedio explained. "He would say, 'I love you more than all the oceans and all the skies.' It just felt very symbolic and like it fit the mission of what I'm trying to do."

That mission entails helping people confront and examine their grief in an honest, reflective way — both alone and with the help of others in the same boat. DeMedio embraces everything from bawling one's eyes out to finding solace in dark humor, whatever it takes to actually deal with the pain.

DeMedio also has a podcast, "So Sorry For Your Loss," that's now more than 50 episodes in and has included a wide range of guests across various topics related to grief. The tag line for the podcast is a simple, "Grief Sucks," much in the way you might picture Gary DeMedio shouting, "Dallas Sucks."

In one recent episode of the podcast, Gianna interviewed Courtney Veale, a star in the Bravo series "Below Deck," about the actress coping with her dad's Alzheimer's diagnosis — a different type of loss. Other episodes feature men talking about their grief and encouraging others like them to challenge misguided expectations about seeking help to deal with depression.

The launch of All The Skies has been a do-it-yourself learning experience for DeMedio, but she pushed to get the boutique up and running for Father's Day this year.

"Something that I try to tell people going into these parent holidays, or a death anniversary, is to really try to be cognizant of your own self," DeMedio said. "Be as selfish as you possibly can be, because it's very easy to ignore the feeling and say, 'I don't want to acknowledge this,' or 'I don't want to make myself sad.' But you kind of need to, and you can't escape this. You can't just skirt grief."

DeMedio's online store features a curated collection of 40-50 products that address different needs of people who are grieving, whether it's over a parent's death or anyone else whose absence has left a hole. Some of the items on All the Skies are grief books that DeMedio says have been transformative for her, including a few that offer an edgier take on how to heal. She's also worked with wholesalers and manufacturers on a collection of jewelry, greeting cards, gel bead eye masks, and an apparel line with simple designs on soft shirts. 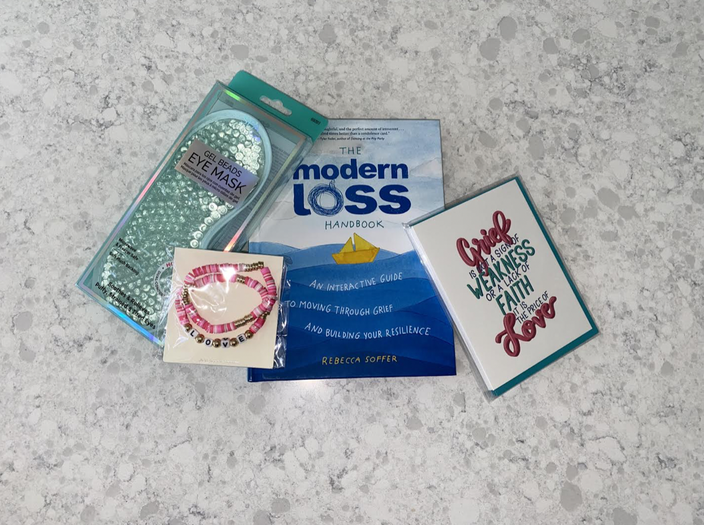 All the Skies has a range of books, jewelry, apparel and other items to help with grief. 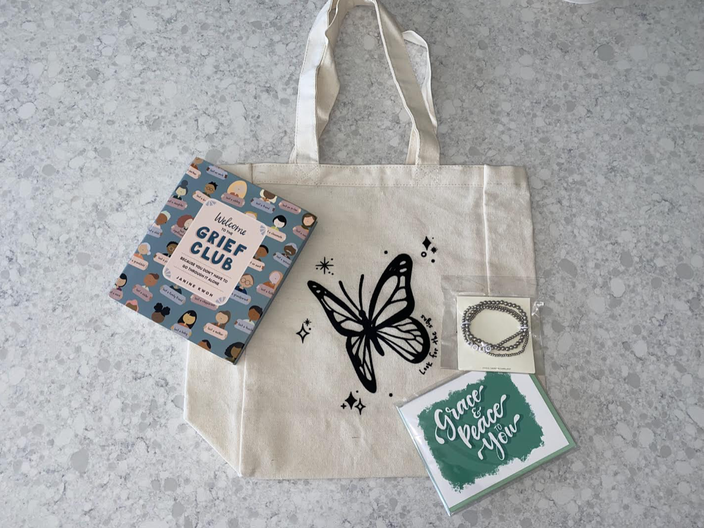 A sampling of products available at All The Skies.

"With the apparel, I really want to create a sense of community — because grief can be so isolating," DeMedio said. "If you see somebody else wearing it, you're going to be like, 'Oh, they lost somebody, too.' Maybe that's something to open up a conversation, or just help somebody to feel like they aren't the only person on Earth going through it. It's very easy to feel that way in grief."

DeMedio is also developing an extensive resource guide that will contain the best books, article and media she's found along her journey that have helped shape her outlook on healing.

"It's all these resources that I've seen over the years that I would have loved if somebody could have handed them to me in the beginning," DeMedio said. "It's my favorite books, podcasts, support organizations, social media accounts and YouTube and TED Talks about grief. It will be a downloadable PDF."

DeMedio wants All the Skies to fill a deficit in grief resources for people in their twenties, thirties and forties, whose needs often don't get as much attention as those of widowers and children.

"What about those of us in the middle bracket?" DeMedio asked. "I wanted to open something that was a lot more modern, where people like myself can go and see themselves reflected in the products."

When her dad died, DeMedio didn't predict that she would ever become a voice for a community of people overcome by loss. She was moved to help others when she encountered how often people seem to remain stuck, eventually falling silent about their grief with the passage of time.

"I was really just struck by how people don't know how to — or don't want to — talk about this. And I very strongly felt, at the beginning, like my life was never going to be better. That was it. I was stuck in this really dark place," DeMedio said. "I think people feel a lot of shame in saying that they feel better, because there's this notion that they're over it and they no longer miss their person. That's just not the case."

Early on after Gary's death, many people would tell DeMedio — even 20 years after they had lost a loved one — that it hasn't gotten much better for them. It's as hard as it ever was losing a parent.

"That's the stuff that people would say to me, and I believed it. I took it on and thought there was no way out," DeMedio said. "The best advice I got was that I needed to face it early on and not push it down. I really took the time to sit down and dissect how I felt, and in doing so, I really got myself to a good place."

In the five years that have passed since Gary DeMedio's death, Gianna has taken big steps in her life.

"I got engaged. I got married. I had career advancements. I had a baby," DeMedio said. "I was able to feel every bit of goodness about those things, even though I didn't think it was possible after my dad's death. I thought everything was going to suck because my dad wasn't there."

Ultimately, DeMedio knows life without her dad will always be a struggle, but she wants her platform to help others find the confidence and strength to enjoy their lives in honor of the people they miss. 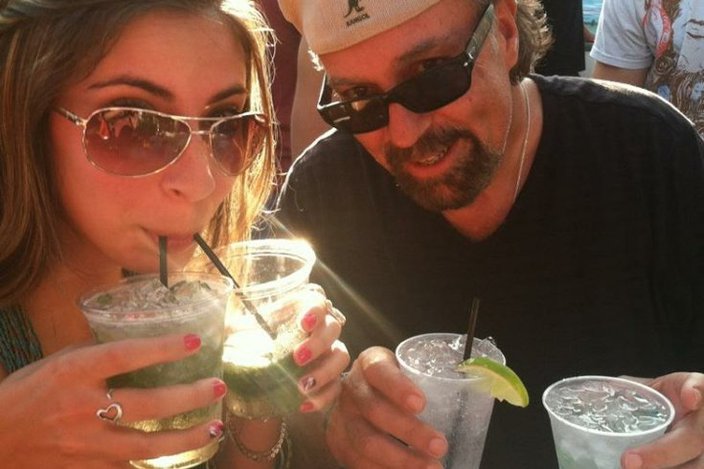 For the past few years, DeMedio has gone to the beach on Father's Day to listen to a playlist of Gary's favorite songs. She pretends he's sitting in a beach chair next to her.

"I look at it differently now. Before, I felt isolated and alone on Father's Day, and thought the day was just a painful reminder," DeMedio said. "Over the years, I've been able to realize that just because he isn't here physically, it doesn't negate the relationship that we had. He'll always be my dad. I can still celebrate him that way."