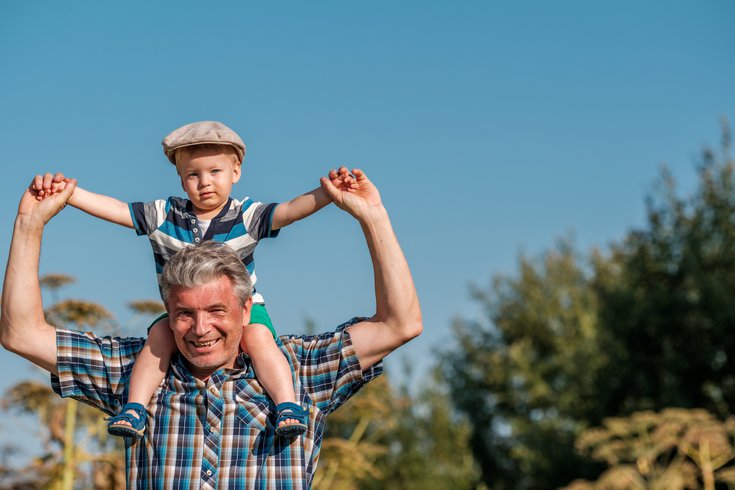 Father's Day offers an opportunity to urge men to confront their health needs. Enjoying time with adult children and grandchildren can be a motivator to adopt a healthy lifestyle.

I'll be at the Jersey Shore this Father's Day. Maria and I will be sharing the weekend with my sons, Anthony and Stephen, grandson Luca, and daughter-in-law Colleen. We'll have dinner Sunday night and, if the weather cooperates, enjoy some quality time at the beach. If I'm really lucky, I may even hang out with Luca at the arcade.

As readers of my articles know, I cherish the role of dad, and work to maximize the value that fatherhood brings me. I've filled you with tales of my father-son trips, boys-night dinners and the fun that Luca generates. They are my most powerful motivators, the inspiration for maintaining a healthy lifestyle. The prospect of participating in such family milestones in the years ahead fuels the fire that gets me up and out to the gym in the morning.

Now, knowing how much fatherhood means to me, and the resulting impact it has on my passion to live healthy, it caused me to ask one simple question: Is fatherhood good for a man's health?

Though I've presented the science on the positive impacts of marriage, documented the ability of our social relationships to motivate behavior, and discussed how intergenerational relationships can spur well-being in men, I still wondered how the experts feel. Do dads have a leg-up on living healthy?  And, if so, what does this look like?

The Gerontological Society of America says that "it is well established that the quality of intergenerational relationships is central to the well-being of both generations." The Society further notes that "grandparents' relationships with their grandchildren are generally related to higher well-being for both grandparents and grandchildren." OK, impacting well-being is a good start, and a step in the right direction, but let's go further, and look at dads in the 50-plus range who have adult children.

The British Psychologist Society agrees with the proposition that social relationships are integral to optimizing the aging process, and highlight the role that adult children play in supporting older adults. The society suggests the support parents give and receive can have positive impacts on their physical and psychological health, with research showing a positive influence of these relationships on "mortality, heart attack survival, cognitive decline, depression and anxiety." Now there's some concrete benefits.

Finally, the Journal of Men's Health and Gender says the "the preponderance of evidence suggests that fatherhood in itself can be beneficial to a man's health." The British journal zeroes in on age breakdown and health status and asserts that men, ages 41-64, showed better health statuses than younger men. As many dads know, when we first become parents, the responsibilities of parenthood can be stressful, and lead to poor health behaviors. As we develop competence in parenting, this stress can subside. When children reach adulthood, the experience can shift and, as I have described, produce a motivating relationship that can inspire healthy practices.

Another perspective is offered by Peace Health, a not-for-profit health care system. The organization suggests children can provide inspiration for fathers to adopt healthy behavior because fathers see that their behaviors are being observed by their children. When they realize they are setting an example, they stop the bad habits and improve their behaviors. In my experience, this role modeling continues as the children grow into adulthood, and can even extend to grandchildren.

And, with respect to the "why" behind the impact of fatherhood on men's health, Vault Health, a New York-based organization that specializes in consumer health, population health and clinical trials, says that fatherhood can have a positive impact on a man's lifestyle because it generates behavioral changes that prompts a reduction in risky behaviors like smoking, drinking and reckless driving – all of which can positively impact men's physical health.

Now, for the record, the literature on men's health shows that there is a downside to fatherhood – a reduction of testosterone. This seems to be a natural phenomenon that occurs in new fathers, brought on by Mother Nature.

In short, the reduction seems to be associated with the natural need for men to focus on care giving for their new child in lieu of a man's instinctive pursuit of partners. For older men with adult children, healthy behaviors can help produce testosterone as a means to offset the natural decline that we experience.

For my younger brothers, a decline in testosterone at your age is no reason to forego having children. Any man with more than one, like me, can testify to the ability to overcome this phenomenon after the birth of his first child.

Its no coincidence that June is Men's Health Month. Father's Day anchors a general focus on all dimensions of manhood, and in particular, fatherhood. Given the historical aversion of men to confront their health needs, it is appropriate that advocates of men's health would use this holiday to bring attention to the needs of men.

At the core of my advocacy for men's health, and that of many others, is what I call the end game, the reason for paying attention to your health. As men, if we are not motivated by our children, grandchildren and our families to give a damn about our health, then we are truly a lost cause. Conversely, if your emotional bonds can serve as the impetus to get you off the couch and become more active, then you have connected the dots, and created the foundation for longevity, fulfillment and happiness.

This Father's Day, be grateful for your status as a father – whether you're a dad, step-dad, foster parent or someone who serves as a father figure. Celebrate fatherhood in any way you can and commit to the healthy lifestyle that will keep you engaged for years to come. It's a great way to make this holiday the best ever.