About 40 percent of males over age 45 do not produce enough of the sex hormone, but regular exercise can mitigate natural declines 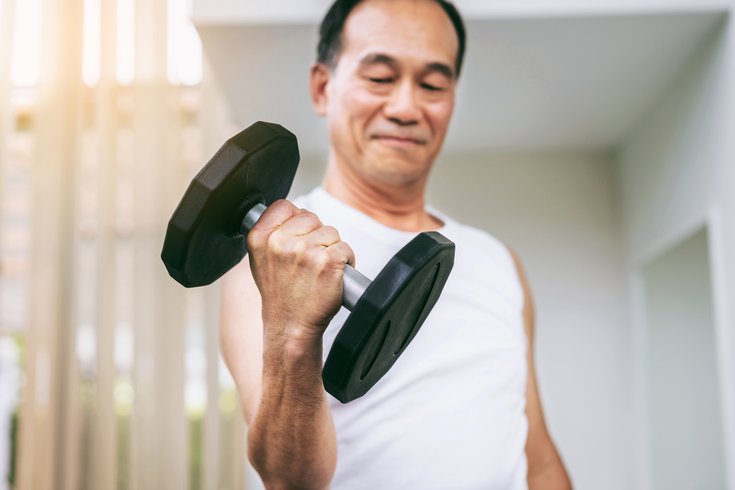 Weightlifting and high-intensity interval training are exercises that will trigger the body to produce more testosterone, helping mitigate natural declines in the sex hormone.

Testosterone is getting a huge amount of attention these days. With an aging population, more men suffer from low levels of the hormone which, among other things, affects a man's sexual functioning. Buried within all this buzz is yet another reason for men of all ages to adopt a healthy lifestyle.

About 40% of men age 45 and older do not produce enough testosterone, a condition formally known as male hypogonadism, the Cleveland Clinic reports. Testosterone levels naturally decline about 1% per year beginning in a man's 30s, though that's not the only reason a man may suffer from so-called "Low T."

With surging numbers of baby boomers fighting the aging process and trying to maintain the most personal dimension of their manhood, you can see why a report from the Journal of the American Medical Association showed that testosterone prescriptions for hormone replacement therapy in men over 40 tripled between 2001 and 2011.

Interestingly, this study also found that prescriptions decreased from 2013 through 2016 after two published reports described testosterone-associated adverse cardiovascular events and the U.S. Food and Drug Administration issued a warning regarding cardiovascular morbidity. However, since then prescription rates appear to be increasing in the U.S. with the growth of aggressive direct-to-consumer marketing.

Beyond Low T's impact on a man's libido, there are other concerning symptoms that can impact quality of life. Harvard Medical School cites a number of additional symptoms including reduced body and facial hair, loss of muscle mass, irritability, poor concentration, depression, brittle bones and an increased risk of fracture.

Yes, aging sucks and nothing personifies this more than Low T. That said, my look into the subject revealed an interesting fact. Healthy behavior, and exercise in particular, can help mitigate low levels of testosterone and actually boost the hormone. Talk about an incentive to live healthy!

According to The Mayo Clinic, healthy lifestyle choices represent a safe way to naturally boost testosterone levels. A healthy diet and daily physical activity can help men maintain their strength, energy and lean muscle mass, as well as promote a better mood and sleep.

Dr. Richard Jadick, a urologist from Piedmont Healthcare, says "exercise will boost testosterone, though certain types of exercise increase testosterone more than others." He points to weightlifting and high-intensity interval training as exercises that will trigger the body to produce more testosterone. He recommends lifting weights for 30-45 minutes two or three times per week, and doing cardiovascular exercises or high-intensity interval training on off days.

A study published in the World Journal of Men's Health indicated that testosterone levels in patients with erectile dysfunction may be increased by reducing fat percentage and improving cardiorespiratory fitness via aerobic exercise.

And, at The University of Western Australia, a study of men with a mild testosterone deficiency concluded that exercise is more effective at improving men's fitness, strength and body composition than testosterone treatment.

Doctors use a combination of blood test results and symptoms checks to diagnose Low T, according to the American Urological Association. Blood tests likely will include the total testosterone level. The assessment of symptoms is gathered through a medical history with targeted questions and a physical examination.

If testosterone therapy is prescribed, the AUA spells out five options based on individual circumstances and insurance coverage: topical application, injections, oral/buccal dose, intranasal and pellets. The association notes that the therapy is not without side effects which range from mild to more serious.

In a market teeming with over-the counter supplements, many men will be inclined to grab something off the shelf or place an online order for the latest testosterone booster. Anyone who has seen the ads knows that the promises of a rejuvenated sex life are everywhere.

But buyers should beware, says urologist Daniel Stokes, of the Cleveland Clinic. There are no such things as natural boosters when it comes to testosterone, he says. Only urologists or endocrinologists should be administering any type of testosterone replacement.

Over-the-counter supplements are not regulated by the FDA and may not be safe, Stokes says. Men cannot be guaranteed they even contain what they claim.

Though my focus is on men over 50, reports of declining levels of testosterone among adolescent and young men are, in the words of one researcher, "very scary." At the 2020 American Urological Association Virtual Experience, experts reported that the declines may be attributed to a number of reasons including obesity, diet, reduced exercise and physical activity, as well as marijuana use and environmental toxins.

As with older men, such decreases in testosterone can cause lower libido and increased risk for erectile dysfunction. It's yet another reason for men both over and under 50 to adopt healthy behaviors, particularly if men are to change the course of history when it comes to their overall health.

As personal as it gets

The assessment of the benefits and risks of testosterone therapy is a conversation men need to have with a qualified physician. Experts advise against treating normal aging with testosterone therapy. What's not in doubt is the material benefit of a healthy diet and regular exercise on testosterone levels.

Yes, as the data on younger men prove, there are a number of factors outside the aging process that can impact T levels. Still, with all of the other benefits that healthy behavior brings, the knowledge that a man's lifestyle can help maintain his manliness – and a lot else – makes healthy behavior an easy choice.

I've often suggested that adapting a healthy lifestyle is one of the most personal choices a man makes. Now you know just how personal it gets.