Heavy snow, strong winds persist but seen tapering off as early as 7 p.m. 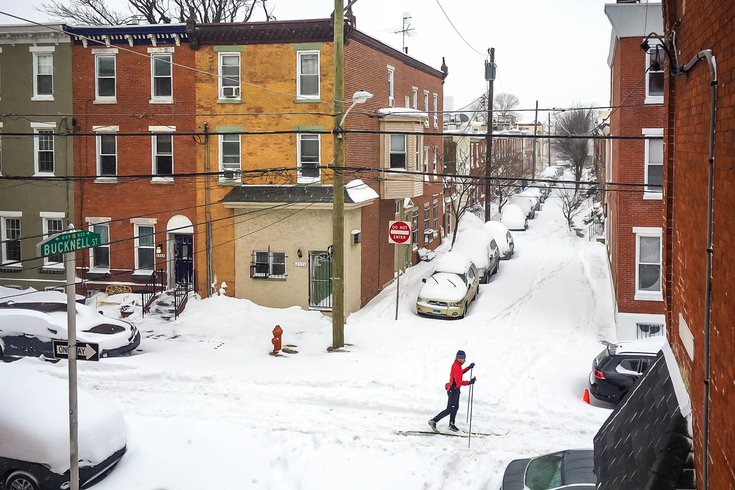 Forecasters say the heavy snow and wind pelting the Philadelphia region will remain strong through the rest of the day and into the night.

In its most recent advisory, however, the National Weather Service said the snow is expected to taper off – from northwest to southeast – between 10 p.m. Saturday and 1 a.m. Sunday.

The heavy winds should be winding down even earlier, perhaps as early as 7 p.m., though occasional, forceful gusts are possible.

The 17.1 inches of snow recorded at Philadelphia International Airport at 1 p.m. Saturday easily eclipsed the record for this date, set in 1935 with 11.9 inches of snow. There was a small chance that the blizzard would equal or better the city's average normal snowfall – 22.4 inches – for an entire season in just one storm, forecasters said. 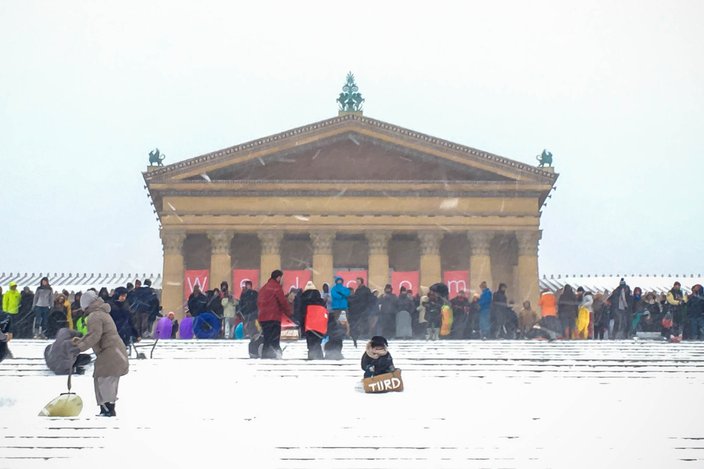 The steps of the Philadelphia Museum of Art were packed with hundreds of people, Saturday, January 23, 2016.

The warning means winds exceeding 73 mph are imminent or occurring along with dangerous sea conditions.

The advisory affects the area between Manasquan Inlet, New Jersey, all the way down to Fenwick Island in the southern edge of Delaware.

Towns along the Jersey Shore and coastal Delaware already are reporting flooding that could worsen late Saturday into Sunday morning as the tides rise.

Further inland, it started snowing just before 7 p.m. Friday in the Philadelphia region – a little earlier to the south – and except for brief periods, it hasn't stopped.

The National Weather Service's blizzard warning remains in effect all day Saturday until 10 a.m. Sunday in Philadelphia and the surrounding Pennsylvania suburbs, most of South Jersey, and northern Delaware.

A strengthening low pressure system continued to track to the south and east overnight, bringing heavy snow and strong winds affecting much of the area, NWS meteorologists reported.

So far, the the strongest wind gust in the region – 75 mph – was recorded at Dewey Beach in Delaware. A 72 mph gust was recorded in Bayville, Ocean County.

The combination of heavy snowfall and strong winds has resulted in whiteout conditions, making travel extremely dangerous. Many roadways are impassable.

Traffic restrictions were implemented Friday evening. A 45 mph speed limit is in effect on I-476 from I-95 to the Mid-County interchange, and north to the Lehigh Valley interchange, I-95, I-76, Route 309 and Route 422.

There's a 25 mph restriction on the Ben Franklin, Walt Whitman, Tacony-Palmyra, Burlington-Bristol and Commodore Barry bridges on the Delaware River.

Traffic on the New Jersey Turnpike is limited to 35 mph between the Delaware state line and Interchange 8, and the same restriction is in effect on the Garden State Parkway between Cape May and Long Beach Island. The Atlantic City Expressway has a similar restriction. 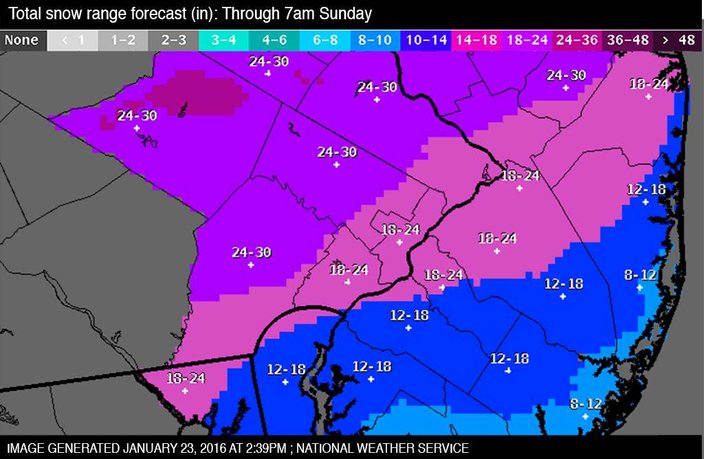 Heavy wet snow can cling to wires and trees, causing them to break and resulting in power outages.

The only part of the region not under a blizzard warning are the coastal areas of the Jersey Shore and Delaware beaches, which are being threatened by wind gusts exceeding 60 mph and the potential for coastal flooding, according to the National Weather Service.

A coastal flood warning remains in effect until noon Sunday for Ocean, Burlington, Atlantic, Cape May and Cumberland counties in New Jersey, and Sussex and Kent counties in Delaware. 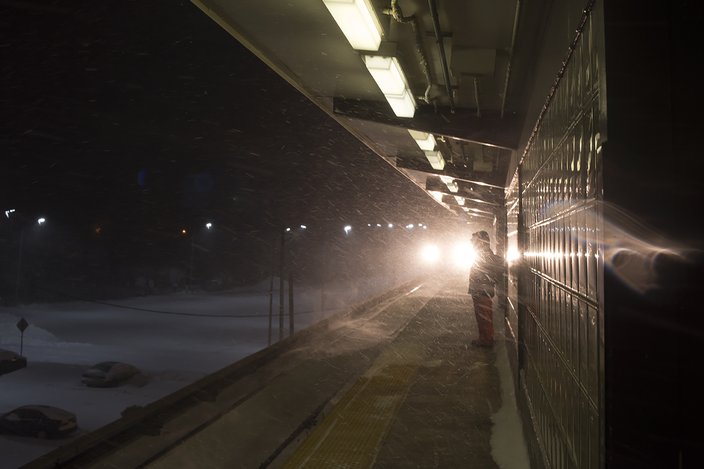 An early morning Passenger preparing to board the Patco line into Philadelphia during a snowy morning in Westmont, NJ on Saturday, January 23, 2016 at 6:40 AM.

Other municipalities encouraged residents in low lying areas to move to higher ground before the storm arrived Friday.

Philadelphia officials declared a Snow Emergency that went into effect at 9 p.m. Friday. All residents parked along city snow emergency routes were required to move their vehicles or be towed.

SEPTA has suspended nearly all of its service until at least early Sunday morning, and all flights to and from Philadelphia International Airport have been canceled.

Gov. Chris Christie has declared a state of emergency in New Jersey Friday night. At a news conference, Christie told people to be smart and stay off roadways on Saturday. NJ Transit has suspended all service until further notice.

New Jersey state climatologist David Robinson says back bay flooding and beach erosion at the shore could range from moderate to major, but he doesn't expect storm surge levels in the northern part of the state to be as bad as they were during Superstorm Sandy.