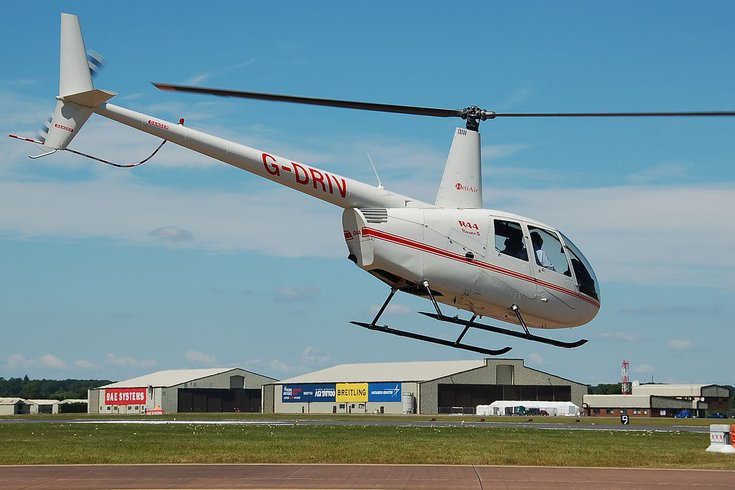 A Robinson R44 helicopter, similar to the one pictured above, crashed in Wyoming County, Pennsylvania, on April 22, 2021, killing one person. The helicopter had taken off an airport in Allen

The Federal Aviation Administration had issued an alert Thursday night about a privately owned Robinson R44 helicopter that had gone missing. The wreckage later was found by Pennsylvania Game Commission officials who responded to the scene of a fire.

The FAA said the helicopter had departed from Allentown Queen City Municipal Airport just after 8 p.m.

The Morning Call reported Friday that the helicopter belonged to a doctor from Upper Saucon Township, who used it to commute to his job at the Guthrie Robert Packer Hospital in Bradford County. The helicopter had been destined for Bradford County Airport in Towanda and it crashed in a remote area of Wyoming County.

Usha Kansara, the wife of Dr. Sanjay Kansara, told The Morning Call no one else was aboard the helicopter with her husband.

The Robinson R44 helicopter is a four-seat aircraft that has been in production since 1993. It is one of the world's best-selling and most widely produced general aviation helicopters, and an investigative report by the Los Angeles Times in 2018 also found it to be the most deadly helicopter due to crashes. Between 2006 and 2016, Robinson R44 helicopters were involved in 42 deadly crashes, more than any other civilian helicopter, the newspaper found.

The cause of Thursday's crash has not yet been determined and the investigation will be led by the National Transportation Safety Board.