MAP: Here's who voted for property tax exclusion in Pennsylvania

The referendum cruised, with 54 percent of voters clicking YES at the polls in support of the measure, according to unofficial returns.

The state legislature now has a green light to amend the state constitution to allow local taxing bodies to exempt the entire assessed value of primary residences in their jurisdictions from taxation.

But property taxes will not just disappear. Further legislative actions will be necessary in any attempt to provide property tax relief to state homeowners.

Pennsylvania is ranked 16 out of the 50 states nationwide in the average amount of property taxes collected, according to tax-rates.org. The median property tax in the state is $2,223 annually for a home worth the median value of $164,700.

State lawmakers for years and years have heard from both senior constituents, who are on fixed incomes and don't have children in schools any longer, as well as younger taxpayers unhappy about the rising property taxes they pay.

Property taxes make up about 30 percent of state revenues, including funding for its public schools.

The referendum did not address how any municipalities, counties and school districts voting for a full exemption of assessed value would make up the funding voide. In fact, state law would have to be changed to provide alternative revenue sources.

A similar measure already was on the books. Local taxing bodies on Pennsylvania have been able to exclude up to 50 percent of the median assessed valuation of all properties in their jurisdictions since 1997, but few have done so.

If approved by the voters, the legislation would have to pass the General Assembly and be signed by the governor. 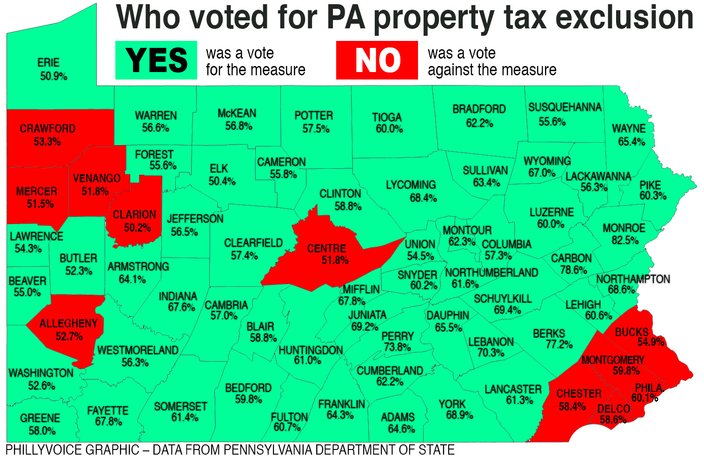 So how did it pass? Here's a look at the data:

• Of the 67 counties in the state, 11 voted against the property tax exclusion, including a southeastern pocket comprising Philadelphia and its four suburban counties: Bucks, Chester, Delaware and Montgomery.

• Also voting against was another pocket in western Pennsylvania including Allegheny (and Pittsburgh), Clarion, Crawford, Mercer and Venango counties, as well as Centre County in the middle of the state, the home of Penn State University.