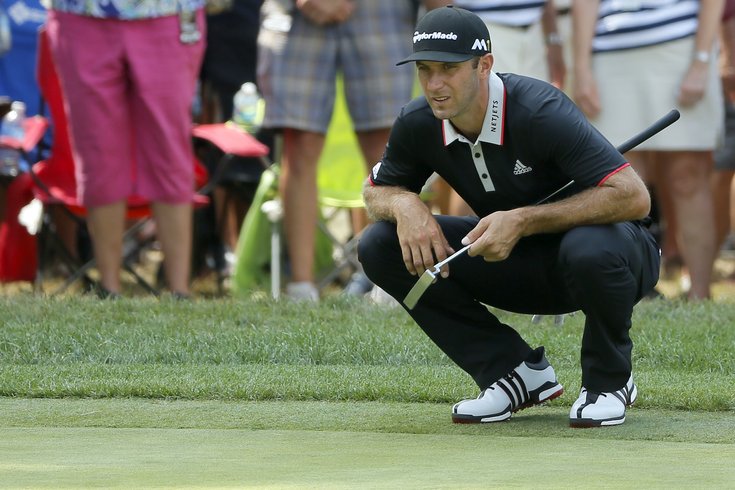 Dustin Johnson lines up a putt on the fourth hole. He's tied for 143rd following a seven-over 77 in the first round of the PGA Championship.

SPRINGFIELD, N.J. — At first glance, the leaderboard following the first round of the 2016 PGA Championship at Baltusrol Golf Club looks like any other would following the first 18 holes of play. There are some surprises — like Rory McIlroy, nine strokes off the lead, finding himself tied with John Daly — as well as the expected — like Jason Day (-2) sitting in the top 10, just three shots off the lead.

For casual golf fans, the ones who have become harder and harder find in the years since Tiger Woods dominated the sport, the top of the leaderboard — at least so far — doesn't have too many recognizable names. Sure there’s Rickie Fowler and Day at two-under, but other than that, it’s pretty bleak.

Take, for instance, the fact that just three of the top 20 golfers, according to the current FedEx Cup standings, shot under par in the opening round of the 98th PGA. Furthermore, Day (2nd) was the only top 10 player in red numbers. And as for the guy many thought was going to win for the second time at Baltusrol this week — Phil Mickelson, fresh off one of the best runner-up performances you’ll ever see at Royal Troon — well, he didn’t have his best round either on Thursday, needing three birdies over his final seven holes just to bring his score down to one-over, tying him for 51st.

At the top of the board, is Jimmy Walker, who went out with the morning wave and set the bar for the day with a five-under 65. Three players — Emiliano Grillo, Ross Fisher and Martin Kaymer — are currently tied for second at four-under. They’re followed by Harris English, James Hahn, Henrik Stenson, and Andy Sullivan, who are in a four-way tie for fifth place at three-under. Twelve players, including Day, Fowler and K.J. Choi, are all tied at two-under.

But why? What happened out there on Thursday that caused so many top golfers to find themselves in danger of not making the weekend? The top 70 golfers (plus ties) will make the cut. Right now, that number stands at two over par.

Let’s take a look at some of the best, and most popular, golfers in the world, and see why they think the final major of the 2016 season didn’t get off to the start they had hoped.

The setup of Baltusrol, while aesthetically pleasing, has to drive these guys insane. First, it’s a par 70, which in this case means it has just two par fives, one of which is 649 yards.

Those two par fives are back-to-back holes. Not only that, but they’re the 17th and 18th holes, meaning if you start your round on the first hole — everyone will do that once the weekend hits, but on Thursday it was only half the field — you won’t get around to playing those holes until the end of your round.

How that impacts each golfer’s psyche will vary. But because most of these guys hit the ball so damn far, they look at these two holes as their best two birdie opportunities out there. And when you’re struggling, sometimes that’s exactly what you need to get your round back on track.

Even for the guys who started on the back, it wasn’t necessarily any easier. The two par fives are just as you’re making the turn, and if you struggle there, it can cause your game to unravel, especially with the knowledge that you won’t have many more chances to get those strokes back.

As McIlroy said following his 74, in which he failed to record a single birdie, there’s “just not a lot of momentum out there.”

Mickelson, who, like McIlroy, began his round on 10th hole, played the two par fives at one-over, bogeying the 18th, which was his ninth. If there’s a silver lining for the 46-year-old who won this event at Baltusrol in 2005, it’s that he played the other 16 holes at even par.

“To make bogey on 18, which is your really only good birdie hole, I just threw away a lot of shots,” Mickelson said. “I played really well the last seven holes to get back in it and I'm pleased with that. I'll do a little work. I've got some time before tomorrow's afternoon round to get things sharp.”

And to add to the argument that driving distance isn't a huge help on this course, just take a look at Dustin Johnson, who averaged a whopping 324 yards off the tee, but hit just 50 percent of the fairways and 55 percent of the greens in regulation on his way to an opening round 77.

Oh, and he also played the two par fives at plus-one thanks to a water-aided bogey on the 18th hole.

The rough at Baltusrol is no joke.

The first two cuts of bentgrass rough extend out from the fairways about eight feet each, with the second cut about 3.5 inches deep. But if you stray more than 16 feet off the fairway, you’ll have to deal with this nastiness.

“Beyond [those two cuts] is what we call the cabbage patch, which will be maintained at 5 to 6 inches,” Mark Kuhns, Baltusrol’s director of grounds, said recently. “The players don’t want to stray too far off the beaten path as far as the fairways go or they will be in some dense, thick rough.”

And the leaderboard backs him up.

Each of the top eight golfers — and 15 of the top 20 — hit at least 50 percent of the fairways on Thursday.

It was also part of the reason for Mickelson’s dramatic turnaround on his second nine.

“When you get into a major championship and the penalty for a miss is severe, it's very easy to steer it, try to control it and not swing freely,” he said. “That was what I did early on today, I kind of steered a lot of shots. I didn't swing freely. … Took me a little while, I kind of got into the flow there towards the end.

“I hit six out of seven fairways on my second nine. Stuff like that. That's the stuff I need to do and not be so inpatient. I've got to be more patient.”

On this course, that’s easier said than done.

Even if you can avoid the cabbage patch, you still have to deal with the tricky poa annua greens at Baltusrol. And those were giving players fits on Thursday.

And as the hot July sun dried out the green, they only got more difficult, as Jordan Spieth (E) found out.

“I left quite a few short, which a lot of people did,” he said. “They looked glassy and then they didn't putt that way. By the end of the day, you get a last few holes on any kind of poa annua greens, let alone a poa annua mix, it's going to be really hard to make putts.”

Perhaps that's part of the reason 25 of the 35 players to finish under par played in the morning wave.

With rain moving in following the conclusion of the first round, will a dampened course make for an easier putting day on Friday?

“It's hard to tell,” Spieth added. “I don't know if it makes it any harder or easier. It makes it different. It will still bounce, but it won't look glassy so you'll know you can hit them a little harder. Still be hard to make putts out here. Plus the pins are in locations where you get a lot of double breakers. That's just the way these complexes are. It makes it tough to match it up.

“So no matter what, it's going to be difficult to make a lot of putts this week.”