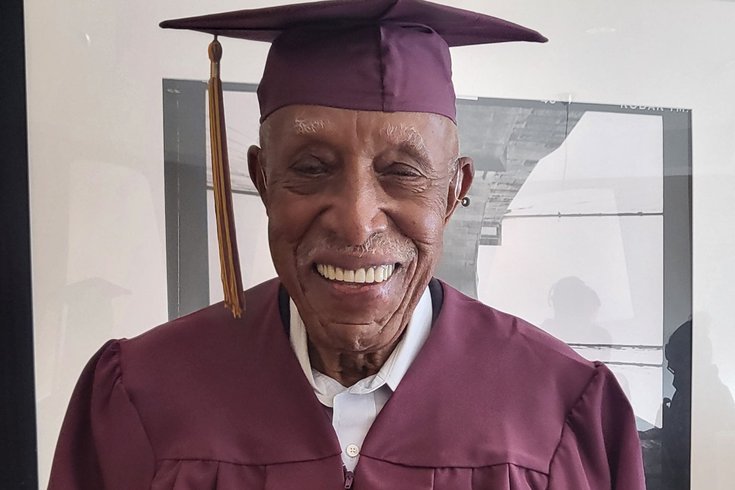 Merrill Pittman Cooper, 101, was awarded an honorary high school diploma last month. He was one of the first Black trolley drivers in Philadelphia and a prominent union leader.

A centenarian who played an important role in the desegregation of public transit in Philadelphia just earned his high school diploma. But not having one never seemed to stop 101-year-old Merrill Pittman Cooper.

He became one of Philadelphia's first Black trolley drivers in 1945.

"It was tough when I first started,” Cooper told the Washington Post. “I wouldn’t want to repeat some of the things people said to me when they saw me operating the trolley. We had to have the National Guard on board to keep the peace.”

When streetcars were phased out, he started driving a bus, and he eventually ran for office in the Transportation Workers Union Local 234.

He served in a number of leadership positions until he was hired as the vice president of the International Transport Workers Union in New York City.

That ended Cooper's 42-year residence in Philadelphia, which began in 1938 when he dropped out of high school at the now-defunct Storer College, a private boarding school in Harpers Ferry, West Virginia, which is a few miles down the river from Shepherdstown, where he was born.

While there, he took college preparatory courses in Latin, biology, history, English and mathematics.

At the end of his junior year, he realized his single mother – who was working as a live-in maid, couldn't afford to pay his last year of school, so Cooper sacrificed his dream of becoming a lawyer to start working.

He and his mother moved to Philly, where they had family. Cooper got a job at a women's clothing store.

While he was proud of his career, Cooper was always bothered by the fact that he never finished high school.

His family got the idea for an honorary diploma in 2018, when Cooper visited Harpers Ferry and Storer College, some of which has been preserved as a historical site, for the first time in five decades.

While there, he stayed in a hotel and ate in a restaurant that Black people weren't allowed in when he was last there.

Last month, his family organized a surprise graduation ceremony for Cooper at a hotel in Hudson County, where he now lives.

The Superintendent Bondy Shay Gibson-Learn of Jefferson County Schools, the district in Harpers Ferry, traveled to New Jersey to present Cooper his diploma.

“I can’t think of a happier day,” Cooper told the Washington Post. “Even though it took me a while, I’m really happy to finally have it."

JCS was proud to be part of a collaborative effort to honor 101-year-old Storer College attendee Merrill Pittman Cooper...